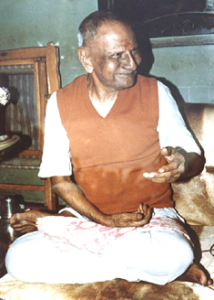 He sang with complete abandon, playing huge symbols and occasionally ringing a large bell mounted on the ceiling.

Every day, as part of the daily routine, Nisargadatta Maharaj would play his part in keeping alive the spirit of his Guru’s teachings and the lineage from which they derive. More than just hymns of praise, these songs reflect the highest wisdom; they represent spontaneous outpourings from the hearts of sages past. Many are taken from the abhangs of the beloved Marathi saint, Tukaram.

The great flow of Indian spirituality has produced numerous saints, sages, and divine minstrels through the millennia; the coastal state of Maharastra (of which the capital is Mumbai, once known as Bombay) has been home to a significant number of these God-realized souls. The saints of Maharastra spoke the highest truth in the most common language, inebriating the culture of the day with the divine scent of authentic spirituality. As a result, the Marathi-speaking people have a profound canon of teachings from which to draw inspiration and guidance in discerning the difference between appearance and reality. Between 1270 and 1681, some of the brightest lights in the Marathi firmament illumined their times. Among them were Namdeva, Eknath, Jnanadeva, Tukaram, and Smarth Ramdas.

It is within this extraordinary self-rejuvenating tradition that several Masters of the Navnath lineage lived and taught. Among the contemporary sages of this tradition were Siddharameshwar Maharaj, Dr. Ranade, and Nisargadatta Maharaj. When this article was written Sri Ranjit Maharaj was eighty-six years old—one in this lineage in whom the light of Self-knowledge shown brightly. A disciple of Sri Siddharameshwar Maharaj, Ranjit Maharaj was openly available to seekers and spoke English fluently. In his later years Ranjit Maharaj toured the West and met with many people. Throughout, he never ceased to perform the daily bhajans that have become a hallmark of his lineage. It was to my great surprise that those same bhajans, which I first heard in the tiny upstairs room of Sri Nisargadatta Maharaj’s flat, once again resonated through the air. But this time, it was at a home in Southern California.
—Matthew Greenblatt

“The consciousness in depth contains the deep blue sky,
Form and formless dive in awareness beyond triads.
No mind in the mindless,
Nonappearance of time and space is samadhi.
Miseries vanish for the siddha purusha; beyond this yoga he remains in deep contemplation,
He alone knows the nature of the all-pervading Brahman.
—From the “Afternoon Bhajan”

Transcribed from Sri Ranjit Maharaj’s talk in Encinitas, California (May 1999). Sri Ranjit Maharaj speaks in a “stream-of-consciousness” manner. Therefore, it seemed most appropriate to provide edited, rather than full selections of his talk. Maharaj speaks in a traditional way when referring to “He” or “Him”—it is a reference to the Supreme Self.

What is Reality or God? If you see everyone as He, then you become empty; the ego doesn’t remain there. When you see everyone this way, then every person becomes like a bubble in the ocean; they are nothing but the ocean. If you understand this, then your own bubble will break automatically, and the ego goes.

Mind is a very wonderful factor. Understand your mind. In the beginning, meditation is required to make the mind subtle. Otherwise, it is so objective it cannot concentrate on Reality. Reality is not inside or out. Understanding is what is required. Nothing is true except Him. If you understand in this way, then I daresay Reality is so open it is everywhere and anywhere. You won’t say that it is “here,” and not “there.” Reality is everywhere.

Understanding should come, and finally one should see that knowledge is also not true. Forget everything. Knowledge, ignorance . . . all is zero.

What you see is not that [Reality]. You say these are flowers. Do they ever say, “I am flowers”? You have taken one name and given many, many names to others. In flowers, also, there are varieties. What to do? The mind has created many, many varieties.

Mind wants imitation always. What it has got it never likes, always wanting something more. You are happy for a moment only, then the mind thinks “I must have something more,” and that happiness is gone. The mind is like the tail of a dog. If you put it in a straight pipe for two hundred years, once you remove the pipe the tail automatically curls again. Understand your mind now. Mind is thought and nothing else.

deam and then you awaken. Who dreams that dream?

When you are dreaming, thoughts come and create many, many things. When you awaken you see yourself and understand it was a dream. In the same way, this [waking] is also a dream. It is all a dream, I tell you. If one is a minister, doctor or architect, whatever he may be, in sleep everything is zero. You forget your body and your name, also. Then awakeness comes again.

Everyone is He. If you understand this, then nothing remains. No one is good and no one is bad; no one is “yours” and no one is “another’s.” All this is the nonsense of the mind, which does things to protect the ego. Forget that and stay in yourself. This is the main point.

We see the whole world, but can you find where you are? Let world be there. First, see where you are. What is your name, please? (A: Carey) Can you show me Carey? Can you put your finger on it? Without a foundation, so many houses have been built. What is true, tell me. Where is Carey? You live as Carey, and upon death leave as Carey, because at that time you cannot see otherwise. You never say “I am not Carey,” even in death.

My parents gave me a name. I am not that! It is a name given when I took birth. What was the name when you were born; can anyone say? It is not possible. So, you know everything in the world, but you don’t know your own Self, and that is a tragedy. Why do I call it a tragedy? Because you know everything but who you are.

A man, during the day, would spend all his time counting his $20,000. At night, he would close all the windows and carefully bury the money in the ground. One day, someone saw him counting and later burying the money. At night, this man carried away all of the money and replaced it with stones. The next day, the owner of the money went to open his bag and began to cry, “Oh, my money is lost!” The second man heard this and told him, “The money is of no use to you, all you do is count it. If you want to count, you might as well count stones. Both are the same, if you don’t use them.”

Understanding is a great thing, but that understanding is finally untrue because it only knows “that which is not.” Go to the Reality, where there is nothing to do. It is like a cinema screen; many pictures come and go, yet it is never affected. Unlike the cinema screen, you let things touch you. Then unhappiness begins from there, nowhere else. The world is a game, nothing else. Play – with this understanding. Then there is no trouble of winning or losing.

You have forgotten Him. Reality is yourself; you have forgotten yourself. Remember again and again. You say, “Oh, he is doing such and such” . . . mind is doing! No one can “do” anything. Forgetfulness [of who we are] comes only through the mind. So meditation is given to help change your understanding, that “I am not the body or the mind.” Furthermore, “I am not ignorance” and finally, “I am not knowledge,” either. It removes from you all the ideas which are not true. The world is like a maze, no? Once you enter it is difficult to return without a guide. The Master is such a guide. He knows we believe ourselves to be the body and mind. He says, “You are neither the body nor the mind. Understand this way.”

Do anything, but understand that nothing is true. Be like the cinema screen and then you will be free from the results of actions. If you add zero to zero what do you get? Subtract by zero and the answer is still zero. When everything is simply zero, how can you make something from it? That is why you are never satisfied. Understand that all is zero, then you are satisfied.

After some time, the Master says, “Now forget meditation and understand your Self – Who am I?” Some meditate for a whole lifetime. What is the use of it? You can’t reach your destination by plane if you just travel up and up; the landing should also be provided for, no? Then you can come to “this” place. Otherwise, you are moving within your mind for the whole lifetime. How can you land? Mind is nothing but a plane. It moves here and there. If you understand that all this is not true, then all problems are solved. If you believe this to be true, then problems arise. What to do? Only the understanding differs, nothing else. Mind should understand and then you become He. Then, all is only zero.

A small child asked his Mother, “Mama, when you sleep where do you go?” She doesn’t know, but says, “We go to heaven.” It is true, but they both don’t know this. The child also asks a good question. You go to Reality but you don’t take it as true, then you come back again and acquire knowledge. You remain in the maze, never realizing that this is not true. You become bound that way.

Sri Siddharameshwar Maharaj (1888-1936) the Guru of both Nisargadatta Maharaj and Ranjit Maharaj taught in a very simple manner, using common language and homely examples. He believed that the teachings on the nature of the Supreme Reality should be simple, clear, and in a language understandable by the common person. Though he lived for only forty-eight years, he deeply touched many souls eager for Self-knowledge. Siddharameshwar Maharaj wrote very little. His talks on the great work of Smarth Ramdas, Dasbodh, have been compiled in a book titled Amrut Laya: The Stateless State. It also includes the work by Sri Siddharameshwar Maharaj, titled, Master Key to Self-Realization. Below are selections from the current edition which was published by Ranjit Maharaj.

A toy tamarind from Gokak (a town in the state of Karnataka, India) is not the real tamarind pod. It is made of wood. Yet, until such discriminative knowledge dawns in one, the sight of the wooden tamarind is bound to set one’s mouth watering. The reason for this is man’s conviction of the thing as true. But once he becomes aware that the tamarind is made of wood, he may appreciate the artistic or aesthetic lines of it, but it will not affect his salivary glands. This very happening is called detachment towards the object.

This example brings us to the conclusion that the reason behind the detachment for an object results after understanding its true nature. Unless the futility of this world is impressed irrevocably upon one’s mind, knowledge of the Self is difficult to obtain.

Unless one understands the false nature of an object, one will never aspire for the real thing. There can be no renunciation of the false so long as the intellect believes it to be absolutely true.

The day the contrary knowledge of the world is understood as naught, by virtue of the Sadguru’s advice, one gets convinced that all this is only an appearance. When this happens, we will be able to look at the world and appreciate it as if it were a cinema or a source of entertainment, but the detachment achieved will remain unaffected.