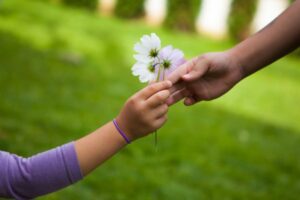 William Samuel was a legend who lived life with all the gusto of an adventurer in an epic film. During the Second World War, he commanded OSS troops in China and led an army infantry company in some of the Korean war’s fiercest battles. He loved birds, plants, trees, arrowheads and every aspect of wildlife. A prolific writer of metaphysics, Samuel was also a beloved spiritual teacher, with students scattered throughout the world.

Samuel’s major writings include A Guide to Awareness and Tranquility and The Awareness of Self-Discovery. His most recent work, The Child within Us Lives! synthesizes Eastern philosophy, Christian mysticism, and the ideas that arise from quantum physics.

William Samuel was a gentle lover of Truth. What makes him unique as a philosopher is that he shows readers how to grasp the experience—rather than the beliefs, rituals, and dogma—that underlies spiritual life. Above all else, Samuel was a transformer, a lighter of spiritual fuses, a vehicle for transformation. William Samuel died in late May this year, 1996, in Birmingham, Alabama.

It’s pitch dark out, a little after five o’clock one gusty October morning six miles southwest of Minneapolis. Into the trunk of my red Honda I load a faded green canvas bag stuffed with enough clothes for five days. On the right front seat I put a navy blue knapsack containing a packet of trail mix and two bags of peanut M & M’s. In the zippered pocket of my knapsack, I place a copy of Lao-tzu’s Tao Te Ching and an index card with some questions scribbled in a red felt-­tip pen. The questions—about why people suffer and how to awaken spirituality—have obsessed me for years.

I’m about to set out on a 1200-mile drive to the hills of central Alabama. I intend to visit William Samuel, a twentieth-century American wise one, a homespun philosopher who has spent decades deci­phering the mysteries of metaphysics. I believe he may have answers to the questions on my index card. Though I don’t realize it then, my questions will remain unanswered. Yet this journey will for­ever change how I view spiritual life.

After a stunning drive through four Midwestern states whose leaves blaze with the fall colors of rust, scarlet, and burgundy, I arrive at the house of William and Rachel Samuel at around three the fol­lowing afternoon. They live in a forties brick ram­bler east of Birmingham. Rachel Samuel greets me at the door with a smile and a southern “Hi!” In her early fifties, with blonde bangs that set off an obser­vant, kind face, she resembles Jo Anne Woodward.

The door opens into their living room. Inside, nothing is as I have pictured it. Perhaps I envisioned a California-style spiritual retreat. But there are no candles, meditation cushions, or glossy photographs of Indian philosopher-saints—not even the scent of sandalwood. Nothing exotic in the slightest. On the right-hand wall, framed in gold, I see an oil paint­ing depicting an Italian farm scene. It faces a white sofa and some easy chairs. On a low shelf, a twenty-four-inch Sony TV perches above a video recorder. A sturdy-looking exercise bicycle stands near the wall that adjoins the dining room.

Then I meet William Samuel. Bespectacled and gentle looking, he seems an unlikely candidate for my philosopher with all the answers. In his early sixties, wearing striped suspenders and a light blue denim shirt over a white T-shirt, he seems better suited to watching cardinals vie for sunflower seeds at a bird feeder. He doesn’t look like the philosopher who has just finished a 400-page book synthesizing science, religion, and metaphysics. He shakes my hand and, after a minute or two of small talk, sug­gests we meet early the next morning in the cottage in back where I’ll stay.

The cottage—the Samuels call it “Woodsong”—has a living room with cedar-paneled walls and smells like pine needles in a damp forest. There’s a low bookshelf stained in walnut just to the right of the entrance as I walk in. I see four or five arrow­heads and some small pinecones scattered on top. Below, I catch a glimpse of a couple of titles: The Zen of Seeing and one of Stephen Hawking’s books—I think it’s A Brief History of Time. On the coffee table in front of the couch there are a couple of recent issues of PC World and a worn copy of Calvin & Hobbes. In the corner stands an antique rocker next to an old Franklin stove. The cottage feels cozy and lived-in, like a woodsy cabin in the Vermont mountains.

A little after eight the next morning, Samuel knocks on Woodsong’s door and steps through the doorway, smiling shyly. After asking if I slept well, he sits across from me in an overstuffed chair on the left. I sit at one end of a long sofa across from a big picture window that looks out onto a grove of loblolly pines—pines whose loftiness gives them the quiet authority of redwoods.

We talk, at first about nothing in particular. I remember asking a question that troubles me: “Do you have to believe in God to be spiritual?” (By nature, I’m suspicious of religion, leery of those who talk readily of God.) His answer reassures me: “It’s enough,” he says, “to believe in the possibility of the Infinite.” I feel relieved. Staunch belief isn’t necessary!

As we talk, I look outside. Everything seems ordinary. Yellow leaves fall. Squirrels chase each other across the branches of tall oaks. Then I notice something unusual going on inside that rustic room. I’m aware of my mind getting quieter. My opinions and judgments begin to fade. I forget the outer world—my life with Kat back in Minnesota, the frustrations I’ve had editing a spiritual book. Forgotten, too, are the questions on the folded index card in my hip pocket, questions that only yesterday seemed urgent. I have no conception of time passing. I feel detached.

At this point, I sense that the couch I’m sitting on, the braided rug under my feet, Samuel, and even my own body seems less solid. It feels as if a pale gold haze descends over us, filling the room. Something seems to watch us while we talk; something wit­nesses what’s happening. There’s no need to think or do anything. Right now everything is unfolding perfectly. My eyes tear, perhaps because I’ve never experienced such a magic moment.

Just then, after this shift in perception, Samuel leans toward me and whispers aloud, “This is it! This is it! This is what people have quested for over the centuries!” His eyes are soft, wise from years of delving into the wonder of what he calls it.

What is this elusive it that Samuel speaks of? He simply means that Eternity’s presence is there with us. His words reflect the transcendent hush that fills the room. Just then, I become conscious of the presence, too. For the first time in twenty years of repeating mantras, counting breaths, praying to the cosmos, practicing yoga postures, and studying the great spiritual texts, I consciously experience being in the presence. And it happens without any effort—without doing anything at all!

In a letter months later, Samuel would describe what we experienced: “It is a moment of relief from the world’s heaviness. It is an instant of recognition, a weightless surveillance of the scene. It is a flawless moment that lets us say, ‘Hey, this is a fine minute! I feel all right!’ That’s it. That goodness and light­ness is it. It’s no big event to the intellect. Yet its recognition and acknowledgment is the most brimming inner understanding anyone will ever acquire—and the heart knows this is so. Suddenly everything is all right.”

On the surface nothing much is happening. Samuel doesn’t mention “God,” “truth,” “Brahman,” or “the Holy Spirit.” He only says, “This is it.” The only thing that happens on that October morning is that Samuel acknowledges the Divine. He acknowl­edges a transcendent moment—what he would later call a glimpse. Yet if Samuel hadn’t pointed out the presence of it, I’d have ignored it. His acknowledg­ment was crucial.

Tears of gratitude fill my eyes. Who would have thought the experience I’d sought for years was so ordinary, so much simpler than I’d imagined? It had been with me, in me, around me all along.

John Bailey is a writer who lives in Northern Minnesota. John has written, edited, and published books on spirituality. From Already on Holy Ground. 1996 by John K. Bailey. Reprinted by arrangement with Hazelden Publishing, Center City, Minnesota.