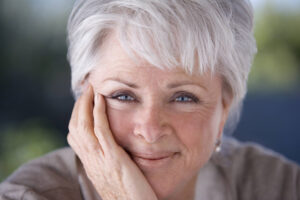 Inner Directions Journal: The “Work” that you do with people includes several exercises. Does this Work (in approach and application) in any way represent a psychological process?
Katie: No. What it does is bring a person back to himself or herself. That is all.

IDJ: I understand there are four specific questions to ask oneself:
1.   Is the belief I hold true?
2.   Can I really know that it is true?
3.   What is the benefit in holding on to the belief?
4.   Who would “I” be without the belief?
What is it about the questions that make them especially effective?
K: They don’t allow you to move outside of yourself. They leave nothing to attach to and nowhere to go. There is simply presence as Self.

IDJ: Does one actually verbalize each of these questions?
K: When the questioning takes place, nothing remains but the storyteller. The story is very real for most people, so when the answer to the questions is experienced, there remains nothing to “know,” it takes us back to our natural state.

IDJ: There is also a “turn-around question” you use in the Work, which helps to reveal how we adopt ownership of beliefs and concepts. If my question were “I am angry at Katie because she is never there for me,” with the turned-around it would be: “I am angry at myself because I am not there for Katie.” The reverse of this is not necessarily true, is it?
K: That is how it seems at the beginning, but let’s take it further.

IDJ: Okay.
K: I am angry with myself because I am not present for myself, I am mentally “over there” with Katie. I have left my center; no wonder I am lonely.

IDJ: You are leaving your own center.
K: Yes. When we are “present,” the word loneliness is not applicable; it becomes foreign to us.

If I narrate a story about something outside of myself, and I am angry or frightened because I am not in my natural state, I then hold the belief that, “she should care about me,” which creates separation.

IDJ: So all these tools are really for helping to let go of beliefs and concepts?
K: All of them.

IDJ: Does this end suffering where it arises?
K: Yes. It eliminates suffering due to attachment to illusory beliefs and concepts.

IDJ: What is the difference in being rooted in an impersonal awareness, observing the mind creating concepts and beliefs, compared with asking the questions associated with the Work. So as long as one gets “prior” to the concept, behind the mind, does it matter?
K: Well, that is the idea, but we are literally “undoing” the mind. We are not simply “becoming still.” In undoing the mind, we don’t allow further concepts and beliefs to arise. In doing the Work, you don’t have to close your eyes; it’s everywhere. It is an incredible joy to inquire about something that appears real but is otherwise. Here, we enter laughter; we are the joke and are the last one to know it. In that moment, you see what is prior to belief; it is automatic. You do nothing but become present in truth; the rest is handed to you; it’s a gift.

IDJ: Do you feel the need to accomplish anything or to engage in any kind of activity?
K: No.

IDJ: What is your “role” in the Work that you do with other people. Is it simply spontaneous?
K: People just ask.

IDJ: And you respond?
K: Yes, like an effect.

IDJ: So from your perspective there is never a cause, only an effect.
K: Yes.

IDJ: You’re saying there is no difference?
K: They are one and the same.

IDJ: How does one gain freedom from identification with the beliefs and concepts?
K: Through the act of noticing.

IDJ: Is this the mind turning back on itself?
K: Yes.

IDJ: You use the word “inquiry” in your Work. Do the questions, along with the turn-around question, constitute the inquiry?
K: Yes. The questions form the inquiry. It doesn’t leave substance. If a person inquires honestly and goes within, it brings him or her back to the originator. And in that space we experience what is prior to that, the unspoken.

IDJ: So “prior” to belief is that, which we really are.
K: Yes. Prior to everything.

IDJ: And so it is the “I” that makes the inquiry?
K: Well, the “I” can inquire all it wants, but it is still nonexistent. It’s when we attach to it that the difficulty arises.

IDJ: So who makes the inquiry?
K: My answer is that it is unspeakable. There can be no answer to the question “Who is the ‘I’ that speaks?”

IDJ: Is it not the mind that makes the inquiry, for in turning back upon itself, the regular cycle of thought ends?
K: It sees itself as the nonexistent. The “I” that speaks is nothing. Attachment to what we see causes us discomfort; otherwise, it’s nothing more than a cloud moving by.

IDJ: You refer to the “I” that speaks as the mind, the apparent individual. People are somehow under the impression that this “mind” has to be done away with, dissolved.
K: No, that won’t work. When looking at beliefs, we should be compassionate with ourselves and others. Others are nothing more than a reflection of our own self. The mind is not an enemy, it’s a friend, and has simply been misunderstood.

IDJ: And if we cease to identify with the mind as the source of our true self, then we simply live peacefully with others and learn to enjoy our own idiosyncrasies.
K: How could we not!

IDJ: How do you explain that for millennia, people have been shutting themselves away and engaging in spiritual practices and preparations, and you just lie on the floor, and “it” simply happens. What is this really all about?
K: Someone referred to me as the master of dissention. This “waking up” is nothing more than the death of a belief system.

IDJ: When you speak about a belief system you mean the whole myth, starting from the idea of a separate individual and its attached beliefs and concepts?
K: If you have the belief: “my friend should pay more attention to me,” and you inquire “is this really true,” and “what do I get for holding that belief,” then you awaken to what is “prior” to that belief—in that moment, you are awake. And as the next one (belief) comes in, it’s just another sweet trip out, to be noticed.

IDJ: Explain “belief system.” Is it synonymous with “thought?”
K: Yes. A belief would be thought, attached to thought. The “I” which arises attaches to what we call a story—that cluster of thoughts I refer to as “belief.”

IDJ: In other words, one is to “catch” the concept as it arises.
K: Yes. Isn’t that where existence is? There is only the “belief” that I woke up instantaneously and you didn’t; what do you gain by holding that belief? You get to stay.

IDJ: What causes re-identification with belief and concept after one experiences true freedom from them?
K: It is simply that attachment to belief has not been fully undone yet. That is all. Beliefs (concepts) arise and you care to see them for what they’re not. The Truth will certainly set us free. If it weren’t so simple, I wouldn’t have found it.

IDJ: Did you ever doubt the finality or nature of your experience?
K: No.

IDJ: Was there no one to doubt?
K: Correct.

IDJ: Did you ever feel the need for third-party confirmation?
K: No.

IDJ: Do you find it complete in itself?
K: Yes. If the old ways begin to arise they simply diminish there. There is no harm done.

IDJ: Are you saying that though your old nature may naturally reassert itself, you are always present to see it for what it is?
K: Yes.

IDJ: If I understand correctly, once you see how and where these beliefs and concepts arise, they can do no harm; they can never take you further away from Truth?
K: Well, they’re nothing. If one were to think they were something, they could inquire and become clear. We believe them to be real. It is quite amazing.

IDJ: You had no exposure to Eastern or Western spiritual teachings, which is why your expression is unique. Have you found confirmation of your own experience in these places as well?
K: Yes, completely.

IDJ: Throughout the day as thought arises and identification with it, should this Work be practiced?
K: Yes. I can work with someone for a while in the morning and they’ll start to talk and not finish sentences, they’ll notice what I am speaking about so fast.

IDJ: One may take time to introvert the mind for the purpose of seeing wherefrom this sense of “I-ness” comes, as a result of a deep inward desire for freedom. Is this different than the results one would get from applying the Work?
K: What you are describing—going within and listening—there’s nothing higher than that.

IDJ: So the questions along with the turn-around can be used in a contemplative manner?
K: When people see that there’s nothing to “know,” then they step into the ability that you just described.

IDJ: The Work, taken on its own, seems to be effective when there is a specific issue that arises: when unhappy with a situation or relationship, etc. While the Work does help the mind to stop looking at a situation from the position it does, what if one does not have any specific “issues” to deal with at a given time? Where does one stand regarding the Work?
K: What I say to them is, “keep what you have.” The Work takes hold of you. If you sit down and apply it a few times, you begin to “undo” yourself. What you are “doing” is using this process to wakeup to absolute, pure, unmovable truth.

IDJ: By moving closer to the truth, the truth automatically “grabs hold” of you.
K: There is nothing that can “hold” in that place. Though this waking up sounds like a process, it is beyond it. This is not going to be clear to people until they suffer enough to take a look.

IDJ: In your case, was it because you had suffered enough?
K: Yes

IDJ: And that was it?
K: In my case there was no way out, there was no other way. I didn’t know that there was life that could be so “alive,” after the death of the “I.”