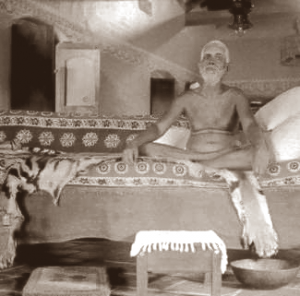 I am often asked, “If you were stranded on a desert island and had only one book, what would it be?”  The book you are now holding in your hands–Talks with Ramana Maharshi–isone of the two or three I always mention. And the Talks top the list in this regard: it is the living voice of the greatest sage of this century and, arguably, the greatest spiritual realization of this or any time.

One of the many astonishing things about these Talks is how remarkably unwavering is the tone and style, the voice itself—not in the sense that it is fixed and rigid, but rather that it speaks with a full-blown maturity from the first word to the last. It is as if—no, it is certainly the case that—Ramana’s realization came to him fully formed—or perhaps we should say, fully formless—and therefore it needed no further growth. He simply speaks from and as the absolute, the Self, the purest Emptiness that is the goal and ground of the entire manifest world, and yet is not other to that world.

What and where is this Self?

But then people usually make a rather unfortunate mistake in this Self-Inquiry. They think that if they rest in the Self or Witness, they are going to see something, or feel something, something really amazing, special, spiritual. But you won’t see anything. If you see something, then, that is just another object—another feeling, another thought, another sensation, another image. But those are all objects; those are what you are not.

No, as you rest in the Witness—realizing, Iam not objects, I am not feelings, I am not thoughts—all you will notice is a sense of Freedom, a sense of Liberation, a sense of Release—release from the terrible constriction of identifying with these little finite objects, the little body and little mind and little ego, all of which are objects that can be seen, and thus are not the true Seer, the real Self, the pure Witness, which is what you really are.

So you won’t see anything in particular. Whatever is arising is fine. Clouds float by in the sky, feelings float by in the body, thoughts float by in the mind—and you can effortlessly witness all of them. They all spontaneously arise in your own present, easy, effortless awareness. And this witnessing awareness is not itself anything specific you can see. It is just a vast, background sense of Freedom—or pure Emptiness—andin that pure Emptiness, which you are, the entire manifest world arises. You are that Freedom, Openness, Emptiness—and not any finite little thing that arises in it.

Resting in that empty, free, easy, effortless witnessing, notice that the clouds are arising in the vast space of your awareness. The clouds are arising within you—so much so, you can taste the clouds, you are one with the clouds, it is as if they are on the side of your skin, they are so close. The sky and your awareness have become one, and all things in the sky are floating effortlessly through your own awareness. You can kiss the sun, swallow the mountain, they are that close. Zen says “Swallow the Pacific Ocean in a single gulp,” and that’s the easiest thing in the world, when inside and outside are no longer two, when subject and object are nondual, when the looker and looked at are One Taste.
www.kenwilber.com