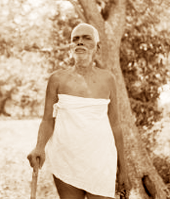 In Light of the Teachings of Ramana Maharshi

Although the above statements seem to contradict each other, they do so in appearance only. The first set of statements concerns the availability of Self-knowledge and applies to one’s “natural” state—the state one has been alienated from through the sense of individuality and a false notion of separate identity. As long as one mistakes a rope for a snake, there is only the snake which has been superimposed falsely on the rope. The rope and the snake cannot coexist.

Ramana gives the following examples to illustrate this point. Someone keeps a key in its usual place and, forgetting its whereabouts, searches everywhere and eventually finds it. The loss of the key and its ultimate discovery were both real from the standpoint of the one who looked for it. In another example, he cites the story of “The Tenth Man.” Ten men were crossing a river together. After swimming across they wished to verify that all had made it safely to the other side. Each one in the party counted those present but omitted himself, therefore counting only nine members in the party. Presuming that one of them had drowned on the way, they began to lament loudly. A wayfarer passing by noticed their plight and struck each one of them on the shoulders, while asking each one to count their number (1, 2, 3, and so on) aloud. Lo and behold, the last man shouted “ten.” The drowned person had been rescued! These examples illustrate the point that one’s true nature remains covered by one’s experiential ignorance of its existence.

The same holds true for the Self and Self-knowledge. Though the Self alone exists, one is unaware of it as a fact of one’s own experience, until ignorance is removed. The effort referred to by Ramana is not for attaining the Self but for removing the obstructions to one’s awareness of it. We first hold forth the false notion of “I am so and so,” then continue this error through a series of identifications with people, ideas, relationships, and so on. One is caught in the constant movement of the mind and the varying identification of one’s being with the multifarious thoughts. These all depend on the external stimuli of objects and the internal thrust of latent tendencies and residual memories. Movement of thought is faster than the wind. The vast storehouse of memories related to actions keep externalizing the mind with their outward thrust. Effort is needed to check this flow of thought, otherwise one will always be “running with the mind.”

While talking about effort several doubts are bound to arise. Does not effort imply a goal to be attained? Would it not distance the goal when it is already and forever available now? The way to avoid this is to be always conscious that what we call “effort” is only a process that removes the mental road blocks and turns the mind away from its fascination with objects, from its obsessive belief that happiness can be other than the Self.

The other doubt is about the validity of using the mind at all. Would we not be limited by its circumference—that is, its innate limitations? It is important to realize that the only instrument available is the mind. At present its energy is wasted on the creation of an infinite web of thought. But upon recognition of this unproductive mental activity, the mind becomes one-pointed and its energy is no longer dissipated.

Unfortunately, much spiritual effort has been misdirected toward the pruning of thought, the cultivation of goodness, and more generally the substitution of one set of desires for another. The teachings of Ramana Maharshi point the attention directly to the “thinker,” to the originator of this world of thought. Self-enquiry, with its focus on the individual or the subject, takes one away from looking without, away from the realm of thought and its movements, from the ever-moving waves to the ever-still vastness of the ocean. The effort we speak of here is to hold on to the “I am,” the core of one’s being. Effort as a continual redirection of the attention is needed so long as one does not have a firm hold on the “I am.” Then the question arises, how does one know whether one’s attention is firm or the mind is slipping back to its usual thought patterns? If thought subsides while one is fully awake, one has held the attention on “I.” When thoughts re-emerge, it means that our attention has strayed and the mind returned to its usual pattern of activity.

Ramana explains that Self-attention has the advantage of turning the mind to its source. This practice is like a dog tracing its master through his scent. It does not know the master’s height, color, age or any of his individual characteristics, but it knows his scent, and it returns home by that single faculty.

Gradually there is intermittent subsidence of thought and an in-turning of the mind toward its source. The limited use of the mind, to pay attention to its core, helps destroy its tendency to be externalized. Ramana asks, “Does not the stick used to stir the funeral pyre itself get destroyed in the process?” By steadily abiding in the fullness of one’s consciousness, the discovery of one’s own natural happiness, the Truth that ever is—is revealed. Thereafter no effort is possible, for the one who makes the effort has ceased. Ramana says about this state, “Here it is impossible to make effort; there it is impossible to be without it.” The here refers to the state of steady Self-awareness and there refers to a life that is ego-centered. The real beauty of life unfolds when ego rests at its source, in the fullness of consciousness. In this state action flows without the burden of anxiety or fear, joy abounds, and one is wholly free from any sense of dependence, pain, or sorrow. It is described by the ancient sage Dakshinamurti as “speechless eloquence.”

The Ultimate Truth
Once, when the great spiritual adept, Ganapati Muni, was present in the old hall of Bhagavan Ramana Maharshi, a group of villagers asked, “How are we to control the mind?” In reply, Ramana asked them to look into the origin of mind and explained the path of Self-enquiry. Soon they left and Bhagavan as usual went out for a walk. Remarking to others Ganapati Muni said, “The path of Self-knowledge, which Bhagavan enunciates, is so difficult even for the learned, and Bhagavan advocated it to these poor villagers. I doubt whether they understood it and still less whether they can practice it. If Bhagavan had advised them to practice some puja (worship) or japa (repetition of words) that would have been more practical.” When Bhagavan returned from his walk, this was conveyed to him and he commented, “What to do? If a teaching is to be imparted according to the traditional way, one must see first whether the recipient is qualified or not. Then various methods are prescribed step by step. Later, the Guru says that all these are only preliminary and one has to transcend all this. Finally, the ultimate truth that ‘the Self alone is real’ is revealed and to realize this the direct path of Self-enquiry is taught. Why this roundabout process? Should one not state the Ultimate Truth and direct path at the beginning itself, rather than advocating many methods and negate them at the end?” So saying Bhagavan resumed silence.

The late A.R. Natarajan was the president and founder of The Ramana Maharshi Center for Learning in Bangalore, India. He is the author of many books on the teachings of Ramana Maharshi. www.ramanacentre.com