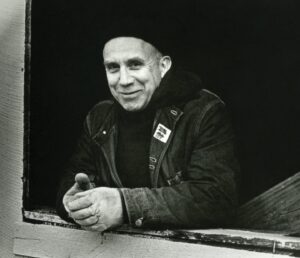 Merton came to embrace the profound relationship that developed between his vocation to the silence of his monastic life and its rich and sacralizing effects on his poetics. Against all expectation and in spite of the persistent efforts of the Catholic Church to silence him in the ’60s, Merton emerged as one of the most prominent and effective social critics in twentieth-century America. This irony is not lost on the profound conflict Merton experienced between a vocation to monastic solitude and the expression of his relentless social conscience. Words were his enemies as much as they were his allies, circumscribing him with guilt as often as they articulated his longing for freedom for humanity.

At the deepest level, Merton experienced the mystic’s profound understanding that silence is a language of its own with as much influence and power as words (his study and practice of Zen was of great importance to this revelation). His poetics “dance in the water of life,” in which sound and silence create their own music and art.
—from the Introduction by Lynn R. Szabo

In Silence
Be still
Listen to the stones of the wall.
Be silent, they try
To speak your
Name.
Listen
To the living walls.
Who are you?
Who
Are you? Whose
Silence are you?

Who (be quiet)
Are you (as these stones
Are quiet). Do not
Think of what you are
Still less of
What you may one day be.
Rather
Be what you are (but who?) be
The unthinkable one
You do not know.

O be still, while
You are still alive,
And all things live around you
Speaking (I do not hear)
To your own being,
Speaking by the Unknown
That is in you and in themselves.
“I will try, like them
To be my own silence:
And this is difficult. The whole
world is secretly on fire. The stones
Burn, even the stones
They burn me. How can a man be still or
Listen to all things burning? How can he dare
To sit with them when
All their silence
Is on fire?”

From In the Dark Before Dawn, by Thomas Merton, Edited by Lynn R. Szabo. Copyright © 2005 by The Trustees of the Merton Legacy Trust. All rights reserved. Reprinted by arrangement with New Directions Publishing, New York, NY.