Truth cannot be revealed by words.
The mute person eating sweets only smiles,
the sweetness he cannot express. 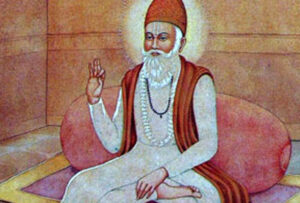 Kabir, who lived between 1398 and 1448, was one of the great poet-saints of India whose works continue to be sung and quoted by millions of people. Although parts of Kabir’s life are surrounded by legend, it is fairly well-established that he was born in Beneras (Varanasi) and was adopted and raised by a Muslim weaver. Kabir wrote poems that expose the pretensions and hypocrisy of conventional religious views. His passion was the direct experience of Truth. To this end, he spent his life exposing the fabricated barriers between Hinduism and Islam; by relentlessly pointing out that the heart of both traditions express the same experience of God or Reality.

Kabir’s deep spiritual inclination manifested itself at a very young age when he cleverly found a way to become initiated by the great saint, Ramananda, who eventually declared Kabir to be the dearest of his disciples. In the early morning hours, Kabir stretched himself along the steps of a bathing area at the banks of the Ganges where Ramananda went for his daily bath. Taken aback that he had unintentionally stepped on the body of someone, Ramananda uttered “Rama, Rama,” which Kabir immediately took to be his sacred mantra. Ramananda was criticized by both orthodox Muslims and Hindus for initiating Kabir, but he understood the disciple’s depth of sincerity, embraced him, and prophesied that he would make a remarkable contribution to the spiritual upliftment of humankind.

Kabir was a great religious reformer and left behind an exquisite body of enlightened poetry that weaves together the mystical philosophies of Hinduism and Sufism. His works express a wide range of mystical experience, from the loftiest abstractions to the most intimate and personal. Some of Kabir’s poems have become classic Sufi texts. He was radical for his time—a true original who spoke from his immediate experience of the Infinite. Even in Kabir’s time, Guru Nanak, Dadu, and several other spiritual leaders acknowledged his greatness. Hundreds of years later, Rabindranath Tagore helped to spread the unique voice and message of Kabir by translating many of his poems.

Loved and revered by both Hindus and Muslims both groups tried to claim Kabir’s body when he died at the age of seventy-eight. The morning of his death, when both communities headed to the location where his body lay covered, they found beneath it a pile of flowers, which were evenly divided between them. Even in death, Kabir continued to express a message of peace and awakening. Although the details of his life are sprinkled with legends, one point is certain: Kabir’s teachings continue to inspire those who seek the fundamental essence and heart of religion rather than its outward form.

Kabir’s powerful verse skilfully blends metaphors and language from both the philosophical and devotional aspects of Hinduism, with the monotheism and egalitarian view of Islam. Yet, he often expresses disdain for organized religion and is quick to point out its inherent initiations and hypocrisy. He is held in high esteem by Hindus, Sikhs, and Muslims alike. Because his work is firmly grounded in the experience of Self-realization, he is able to touch the heart with a sense of spiritual awareness that is powerfully direct, vibrantly alive, yet very simple in its style.
—Joan Greenblatt

Below are a few of his outpourings:

Saints, I see this world is mad.
If I tell the truth, they rush to beat me,
If I lie they trust me.

Difficult is the way to the Beloved,
like walking on the edge of a sword.
Once you have started to entice him,
don’t let the rules of society stand in your way.

If you know you are alive,
find the essence of life.
Life is the sort of guest
you don’t meet twice.

This union with the guru, O Kabir,
Sets me free; like salt mingled
With flour, I am no more!

O dear brother!
By what name would you call me?
I do not quote from the scriptures;
I simply see what I see.

When the bride is one with her lover,
who cares about the wedding party?
Neither a Hindu, nor a Muslim am I!
I am this body, a play
Of five elements, a drama
Of the spirit dancing
With joy and sorrow.

A drop melting into the sea
Everyone can see.
But the sea absorbed in a drop
only a rare one can follow!
I look at you, you at him,
Kabir asks: how to solve
This puzzle—you, he, and I?

Dying, dying, the world is dying only.
But lo! None knows how to die
In such a way that he dies never again.

You count the beads by the hand,
and with the lips you repeat the Name.
Meanwhile, your mind wanders on all sides,
This is not the remembrance of God.

When the Swan reaches the lake, he need not wander in ponds and puddles.
Your Lord is the inner Self, why seek him outwardly?
Says Kabir: listen my folks,
I realized the Lord within—like oil contained in the seed.

I’ve burned my own house down,
the torch is in my hand.
Now I’ll burn down the house of anyone who wants to follow me.

Friends, my brothers,
why do you err?
Creation is in the Creator,
and the Creator is in the creation.
He vibrates in all the vessels.

Allah caused one Light
that sired the universe.
Why vilify that?

His ways are beyond us.
Guru-illumined, says Kabir,
I see my Lord in all.

Setting me free, O Ram,
where will you take me?
Where is the heaven
that you will offer me?

Lead me to redemption
if I am another,
but why mislead
when there is none other?

Unaware of the truth
I saw the saved and the saviour,
but now I see, says Kabir,
one Ram everywhere.

Who is it that dies
and who is born?
Who goes to heaven or hell?
Birth is true
when the one abides
in the five elements.

Gone forever
without a trace
when the One rejoins the Void.
Vessel in the water
and water in the vessel
water whether within and without.
The vessel breaks
and waters re-merge,
this is the essence, say the devout.
With Void in the beginning
Void at the end
and Void in between.

Brother, who bears the fruit of actions?
Such notions, says Kabir,
Are pieces of fiction.

Mullah, why so loudly
do you call?
Ram-Rahim vibrates in all.
Allah is not deaf and dumb;
look for Him
in the world, in the heart.
When glorifying God,
I called for prayer
offering my anger and desire.
I found the Mullah beguiled,
for I beheld, says Kabir,
Ram-Rahim in all.

All the holy places are just rivers;
they wash off nothing,
I have bathed in them.
All the idols are lifeless, brother;
They feel nothing,
I have cried to them.
The Koran and Puranas are just words;
They reveal nothing,
I have seen beyond the cover.
All that is not felt within the pulse,
Says Kabir,
Is simply hollow and false.