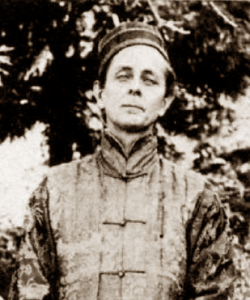 Dr. Walter Evans-Wentz was the editor/translator of The Tibetan Book of the Dead, was drawn to the mystical clarity of “high, exalted places.” He found it in the mountains of Tibet, the South Indian mountain, Arunachala, and the Cuchama mountain southeast of San Diego, California.

For several weeks in 1935 Dr. Evans-Wentz resided at the Ashram of Sri Ramana Maharshi. His plans to visit Mount Kailas and Lake Manasarowar in Western Tibet were rejected by the British authorities, so he went to South India. During his stay at the Arunachala Hill, he would often walk reverently around its circumference—barefoot and alone. The mountain, and the quietness and silence of the Indian countryside touched him deeply. He never wrote about this visit even though he considered Ramana Maharshi to be the greatest Indian sage of this century. This visit was immortalized in the book, Talks with Sri Ramana Maharshi, recorded by Ramanananda Saraswati.

Early in life Dr. Evans-Wentz knew he was to be a wanderer. In his unpublished autobiographical notes, written in Sikkim in 1920, he tells of his first “ecstatic-like vision.” He had been alone on the upper Delaware River (mid-1890s) in the midst of . . . “wild daisies and buttercups in one of my secret retreats communing with nature. As I walked home slowly, I fell to singing a song of ecstatic rapture, composed as I sang it. There came flashing into my mind with such authority that I never thought of doubting it, a mind-picture of things past and to come. No details were definite, there was only the unrefutable convictions that I was a wanderer in this world from some far-off unfathomable and indescribably yet real realm; that all things I looked upon were but illusionary shadows. And there came to me a vague knowledge of things to be. I knew from that night that my life was to be that of a world-pilgrim, wandering from country to country, over seas, across continents and mountains, through deserts to the end of the earth, seeking, seeking for I knew not what.”

Evans-Wentz: What time is most suitable for meditation?
Ramana Maharshi: Time is only an idea. There is only the Reality. Whatever you think it is, it looks like that. If you call it time, it is time. If you call it existence, it is existence, and so on. After calling it time, you divide it into days and nights, months, years, hours, minutes, etc. Time is immaterial for the Path of Knowledge. But some of these rules and disciplines are good for beginners.

EW: What is the Path of Knowledge?
RM: Concentration of the mind is in a way common to both Knowledge and Yoga. Yoga aims at union of the individual with the universal, the Reality. This Reality cannot be new. It must exist even now, and it does exist.

Therefore the Path of Knowledge tries to find out how separation came about. The separation is from Reality.

EW: What is illusion?
RM: To whom is the illusion? Find it out. The illusion will vanish.Generally people want to know about illusion and do not examine to whom it occurs. It is foolish. Illusion is outside and unknown. But the seeker is considered to be known and is inside. Find out what is immediate, intimate, instead of trying to find out what is distant and unknown.

EW: Does Maharshi advise any physical posture for Westerners?
RM: It may be advisable. However, it must be clearly understood that meditation is not prohibited in the absence of posture, or prescribed times, or any accessories of the kind.

EW: Does Maharshi have any particular method to impart to the Westerners in particular?
RM: It is according to the mental equipment of the individual. There is indeed no hard and fast rule.

EW: Is work an obstruction to Self-realization?
RM: No. For a realized being the Self alone is the Reality, and actions are only phenomenal, not affecting the Self. Even when he acts he has no sense of being an agent. His actions are only involuntary, and he remains a witness to them without any attachment.

EW: What is the practice?
RM: Constant search for “I,” the source of the ego. Find out “Who am I?” The pure “I” is the Reality, the Absolute Existence-Consciousness-Bliss. When That is forgotten, all miseries crop up; when That is held fast, the miseries do not affect the person.

EW: Is solitude necessary for a realized person?
RM: Solitude is in the mind of man. One might be in the thick of the world and maintain serenity of mind; such a one is in solitude. Another may stay in a forest, but still be unable to control his mind. He cannot be said to be in solitude. Solitude is a function of the mind. A man attached to desire cannot get solitude wherever he may be; a detached man is always in solitude.

EW: So then, one might be engaged in work and be free from desire and keep up solitude. Is it so?
RM: Yes. Work performed with attachment is a shackle, whereas work performed with detachment does not affect the doer. He is, even while working, in solitude.

EW: They say there are many saints in Tibet who remain in solitude and are still very helpful to the world. How can it be?
RM: It can be so. Realization of the Self is the greatest help that can be rendered to humanity. Therefore, the saints are said to be helpful, though they remain in forests. But it should not be forgotten that solitude is not in forests only. It can be had even in towns, in the thick of worldly occupations.

EW: How long did it take Maharshi to realize the Self?
RM: This question is asked because name and form are perceived. These are the perceptions consequent on the identification of the ego with the gross body.

Find out the underlying Reality behind the states of wakefulness, dream, and sleep. In that state there is Being alone. There is no you, nor I, nor he; no present, nor past, nor future. It is beyond time and space, beyond expression.

It is ever there.

Just as a plantain tree produces shoots at its roots, before yielding fruits and perishing, and these transplanted shoots do the same, the primeval Master of antiquity (Dakshinamurti) cleared the doubts of his rishi disciples in silence, leaving shoots to multiply. The Guru is a shoot of that Dakshinamurti. The question does not arise when the Self is realized.

EW: What does Bhagavan think of the “Lost Soul” mentioned by Jesus Christ?
RM: Think what there is to be lost. Is there anything to lose? What matters is only that which is natural and eternal. That which is born must die; that which is acquired must be lost. Were you born? You are ever existent. The Self can never be lost.