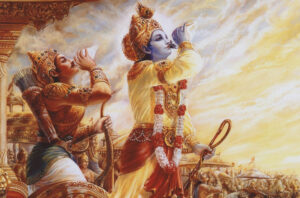 Spiritual texts that have stood the test of time continually reveal the truths they embody through the hearts and minds of those who apply their teachings in daily life. The fact that a teaching lives this way allows it to endure.

The Bhagavad Gita is one of the great scriptures that reveals itself in this manner. It was Mahatma Gandhi’s “bible,” and is both an inspirational text and manual for living, for millions of people in many different countries. Perhaps one of the reasons its message is so relevant to our time is that it is the story of human nature: about freedom and individual responsibility, about ethics and morality, about action and nonaction, and about the nature of God and the individual.

The story of the Bhagavad Gita, or “Song of God,” is part of a larger work, called the Mahabharata. It has been said of the Mahabharata that if one cannot find reference to a particular aspect of human nature in its pages, it probably does not exist at all. What makes these seven-hundred verses unique is that, though they are spoken by God, embodied as Krishna, it is not a system of thought offered by an individual, but rather, as Dr. S. Radhakrishnan writes: “It is set forth as a tradition which has emerged from the religious life of mankind.”1 The original work is said to have arisen around 200 BC. The scene begins on a battlefield, in which the opposing sides, related to each other, are rival claimants to the throne. Arjuna, who surveys the battlefield, becomes despondent. He does not want to fight his relatives and feels that he will incur sin as a result of his actions. Krishna, his charioteer, councils him and exhorts him to fight the good fight, for it is appropriate to follow one’s nature. Krishna chides Arjuna for avoiding his task and indulging in self-pity.

As the dialogue unfolds, Krishna reveals to Arjuna the operation of divine will and the nonidentification with the doership of deeds. He takes Arjuna on a metaphorical journey of the soul, which reveals the ways to self-knowledge through the integrated disciplines of devotion, knowledge, and action.

The great twentieth-century sage, Ramana Maharshi, wrote and spoke very little. Seated in a small hall in a South Indian hamlet, people came from all over the world to sit in his powerful presence. The peace they experienced in his presence provided a glimpse into the potential that lies within their own being.

A visitor who had come to see Maharshi began speaking about the remarkable truths contained in The Bhagavad Gita. During this conversation, another person sitting nearby complained that it was difficult to remember all seven-hundred verses of this great scripture and asked if there was a single verse that captured the essence of its spirit. Ramana, without hesitation, recited the following verse from Book 10, verse 20, “I am the Self, Oh Gudakesa, dwelling in the Heart of every being; I am the beginning and the middle and also the end of all beings.” Later, he selected forty-two verses and arranged them in a specific order. Naming this selection The Song Celestial, it reflects the essential message of this classic text—the way to self-knowledge.