“Vast, whole, immutable, the Self
Reflected in the mind’s distorting
Mirror may appear to move.
Know that it is the image moving.
The true Self never moves or changes.” 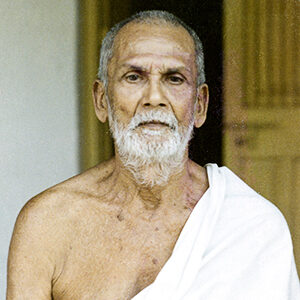 Though the poetry of Muruganar is not widely known, those associated with the life of Ramana Maharshi are familiar with his extraordinary verses, which have been published by Ramanasramam and a few other centers in India. He was often referred to as, “the shadow of Bhagavan;” his full being was completely absorbed in living the teachings of Ramana, exclusive of any other interest or involvement.

Muruganar was thirty-three years old when he first met Ramana Maharshi. The occasion was marked by a poetic outpouring—a result of the bliss of simply arriving in the town where Ramana lived; it was a final fulfillment to the spiritual longing of his heart, which began long before.

Born in August of 1890, in the South Indian town of Ramanathapuram, Muruganar didn’t show much literary potential as a youngster. In fact, he didn’t begin to speak until he was five years old. After completing his education in the nearby town of Madurai, he returned to his home village to teach a royal family Tamil poetry. This new job, along with befriending other Tamil poets of the day, gave Muruganar the opportunity to explore the beauty and depth of the Tamil literary classics. He soon became a rising star in poetry circles.

His father-in-law, Dandapani Swamigal, was a devotee of Ramana Maharshi and gave Muruganar various books containing Maharshi’s teachings and poems. He assured Muruganar that Ramana would appreciate the young man’s compositions, and that being with the sage would also help him flower as a poet.

Muruganar read the books he was given and absorbed them instantly and completely. Finally, arriving at Ramanasramam (where Ramana Maharshi lived) in 1923, he decided to first visit the ancient temple of Arunachaleshwara. There, words spontaneously flowed from him, and he composed his first work on Ramana before even meeting the sage.

Muruganar brought these verses to the Ashram to give them to Maharshi, but when he met him he was so overcome with joy and bliss that he was unable to read at all. Ramana took the verses from him and read them himself. About this first meeting Muruganar said, “Within a few days of reaching Tiruvannamalai there was a distinct change in me, though I could not put it into words. My individuality was submerged in waves and waves of indescribable joy. However, even though wide awake, the whole world appeared like a dream.”

Shortly thereafter, Muruganar was overcome by an intense fear, he became anxious that nothing in his life would ever be the same again, that he would not be able to leave Ramana’s presence, and that he would no longer be able to care for his family.

For quite some time he would regularly visit the Ashram, but each time he departed it became harder and harder for him to actually get on the train. Sometimes Ramana would send someone with him to the station to make sure he actually boarded it. When Muruganar’s mother passed away in 1926, his last attachment to family duty was removed. He resigned his teaching job and settled down in Tiruvannamalai for good.

Throughout his life at the Ashram, the source of Muruganar’s poetic inspiration was always Ramana’s presence and teachings. Muruganar’s poetry flowed like a perennial river, sometimes overflowing with exceptional beauty and wisdom. More than thirty thousand poems were composed by him.

Muruganar died peacefully in August, 1973. People gathered around his bed, singing stirring hymns to the sacred Arunachala hill, my wife and I were among those present. Muruganar, even as he died, continued to light the hearts of those that knew him and his wisdom outpourings. Even today, the poems of Muruganar continue to be sung at the Samadhi of Ramana Maharshi.

Selections from Guru Vachaka Kovai
The Garland of Guru’s Sayings
To those who look within, the highest
Good gained by the Master’s grace
Is wakeful sleep, the supreme state,
The undying flame, the sweet, uncloying
Fruit forever fresh.
—Verse 17

The world of trivial names and forms
Perceived by the five senses is
A mere appearance in the Self,
Awareness pure. It is the sport
of maya, of images projected
By the mind, itself a thought
Arising in Being-Awareness
—Verse 22

Seen in the light of Self-experience
All this phenomenal world is mere
Appearance, like the sky’s deep blueness.
What the deluded, body-bound ego
Perceived “out there” is mind-created,
Nothing more.
—Verse 39

Knowing your true identity
And ever in the heart abiding
As the Self supreme alone,
Play perfectly your human role,
Tasting every pain and pleasure
In common with all creatures.
—Verse 81

Though after examining everything
They have attained the ultimate truth,
The wise put on no strange behavior.
Therefore let your outward conduct
Conform to that of your own people.
—Verse 82

Vast, whole, immutable, the Self
Reflected in the mind’s distorting
Mirror may appear to move.
Know that it is the image moving.
The true Self never moves or changes.
—Verse 94

Ye who go round in eager search
Of this Great Soul and that Great Soul
To look at, are not all Great Souls
Your Self to reach and know and be?
—Verse 121

Not like a boat’s sail wide outspread
And worn away by wind and weather,
But like the humble anchor sunk
In the vast ocean’s depth, the mind
Should plunge and settle in the heart
Of wisdom.
—Verse 191

True clearness, freedom from the mind’s
Ripples and shadows, this alone
Is every-fresh immortality.
By this awareness pure, by this
alone and by no other means,
Can Death, a mere delusion, end.
—Verse 229

Mind’s dissolution in the Self,
The ocean of Awareness, this is
Peace eternal. The Heart’s vast space,
The love-filled ocean of Bliss supreme,
Is the true “I.”
—Verse 258

Questing within, inquiring “Who
Am I, this indispensable
True living Self?” this search alone
Is the one single stream of life
Pulsating through the many faiths
That promise life eternal.
—Verse 338

Great knowers recognize no other bondage
Than the rising movements of the mind
And they find true release nowhere
But in the total death,
Of every movement of the mind.
—Verse 382

When with the keen, unceasing quest
of “Who am I?” one penetrates
The center of oneself, the body-bound
Ego fades away, true Being
Rises Clear as I, as I
And puts an end to all diversity
Illusive as the blueness of the sky.
—Verse 385

No object that in time and space appears
Can have existence independent
Of that supreme and perfect Being.
Hence no time and no place is deemed
Unfit for self-inquiry.
—Verse 395

Birds in the air and fish in water
Dart and leave no track behind.
So none can see the path pursued
By those that journeyed towards the Self
And gained it.
—Verse 413

The sum of knowledge and its end
Is pure Awareness, silent Being.
All other states are but the play
Of the Awareness present in the Self
Whose natural state is Bliss supreme.
—Verse 434