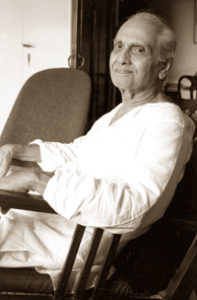 IDJ: When and under what circumstances did you first meet Nisargadatta Maharaj?
Ramesh: It was in November, 1978. Actually, the reason that I went there was because I read an article in The Mountain Path magazine (published by Sri Ramanasramam, the Ashram of Ramana Maharshi). There was an article in it on Nisargadatta Maharaj, written by an American woman, Jean Dunn. In the article, she mentioned the book, I Am That, from which she took several extracts. So I read that article and bought the book. After reading it, I went to see Maharaj.

IDJ: And did you feel anything special in his presence?
R: Yes, certainly. It was his presence and what he said. For me, there was never any question that what he said could be untrue. I accepted it wholeheartedly the moment I heard it. So, what he said was exactly what I seemed to be looking for and had never found.

IDJ: Was there (for you) a period of seeking prior to meeting Maharaj. In other words, were you interested in the spiritual life before?
R: The seeking had started since I was 13 or 14 years old. I always had an intuition that manifestation, which is obvious to the senses, is not real. Also, I had the firm conviction that there is nothing I could do for myself or for anyone else. The sense of personal doership was mellow even in the beginning. My earliest inspiration was Ramana Maharshi.

IDJ: Did you often translate for Maharaj? How did you begin to translate for him?
R: After about three to four months, Maharaj asked me to translate. I was very happy to do this (translate) for two reasons. One, it showed he had a certain confidence in what I had understood, and that my translation would be reasonably accurate. Two, I was glad to be asked to do something for Maharaj. I would have done anything or given freely; there is no question about it.

IDJ: What was there in Maharaj’s teaching that you found especially unique?
R: Maharaj’s basic teaching was that everything happens as a spontaneous functioning of the Totality. So, the “you” doesn’t really exist. But, nonetheless, since there is a (perceived) “you,” that “you” has to be told, “you are That.” But ultimately the understanding would be that there is no “you,” and there is no “me” to become “That.” Consciousness, Totality, or God is all there is.

IDJ: So in a way, one has to go through the “you” first.
R: Teaching begins with an individual. So, the teaching has to be understood intellectually, in the first place. In an extremely rare case the Guru will say something which you will accept wholeheartedly, without intellectual questions arising. But that happens very, very rarely. I always say the seeking begins with an individual and proceeds at its own pace, according to the destiny of the mind-body organism through which this seeking takes place.

The seeking, which begins with an individual, cannot end until the “individual” is annihilated—when there is a total understanding that there is no individual to understand anything, to achieve anything, and that awakening or enlightenment (or whatever the word is), can only happen when this is fully understood. Enlightenment (from my perspective) is the absence of a “me.” The “me” is the sense of personal identity. For a “me” to want enlightenment is a contradiction in terms. Therefore, so long as there is a “me” wanting enlightenment, enlightenment cannot happen.

IDJ: Can anyone who is earnest follow these teachings or does it require specific prerequisites?
R: Anyone can follow the teaching if the mind-body organism is ready, not otherwise. You see, everyone talks about earnestness. When you speak, you have to speak to the person who is there. My interpretation of being earnest is this: something will happen only when earnestness is present; and if something is going to happen according to the will of God, earnestness will have been provided. If the earnestness is not present, then the result will not take place. Earnestness will be present or absent, according to the will of God.

IDJ: Why did Maharaj use terminology that was somewhat different from the accepted language, such as his use of “consciousness” or “I-amness,” meant to represent the individual, not the Supreme.
R: Why not? Maharaj did not consider the existing language as adequate for his purpose. Therefore, he found it necessary to use his own. Whether you call it Consciousness, Totality, God, or the Supreme Power, it makes no difference—as long as one understands there is no free will. In fact, it is the terminology which causes problems.

IDJ: Did Maharaj give you any specific teaching or guidance?
R: No. He said, “There is no one that received any more than what you have as a whole group.” So Maharaj, to the best of my knowledge, did not give an individual teaching. He just spoke, and what Maharaj said was received by persons according to their destiny and programming.

IDJ: And this ego also comes from that source?
R: Everyone is told the ego must be killed, and there are many scriptures which confirm this. My point is: who is to kill the ego? “You” are the ego. The “me,” the thinking mind, is the ego, so who can kill it? You could only kill the ego if you had created it. If you have fabricated something, then you can undo it. But you didn’t create the ego, the ego got created (by something different) Consciousness, not aware of itself (as Ramana Maharshi says, “I-I”), suddenly became aware of itself as “I am.” The impersonal Consciousness deliberately identified itself with each individual mind-body organism, creating a “me,” or ego. Why? Because it is God’s game that has to go on, in order for this dream-reality to continue.

But if the ego is to disappear, will it disappear by itself? Only that power which created the ego can make it disappear.

IDJ: If, as you say, we live in a state of complete spontaneity, do we have any control over what happens in our life?
R: Everything is spontaneous. What you consider “your” action is a spontaneous reaction of the brain to an event. So every action produced through a mind-body organism is a spontaneous action created by God, or the Supreme Power. There is no one to control it.

IDJ: So control is just an idea or a concept we create.
R: Yes. In fact, “control” is a concept created by the ego.

IDJ: How can one stay permanently in the state of witnessing, and not slip in and out of this awareness?
R: The whole problem is, how can one do anything? One can do nothing. But the relevant point in your question is, how can constant witnessing happen?

Constant witnessing is enlightenment in action. One may say, until the understanding from the mind goes to the heart, it is merely conceptual. It comes and goes; there is a flip-flop between knowing and not-knowing, between witnessing and the human mind observing. In witnessing there is no individual; therefore, it is impersonal.

IDJ: And this is something one has no control over?
R: No. The flip-flop between witnessing and the mind observing, is very basic. In the mind observing something, the basic defect is “I hear something,” so when the “I” says, “I feel something” or “I hear something,” then that thing which is observed is subject to comparison and judgment, this being the nature of the mind. But witnessing is impersonal, there is no individual entity that witnesses.

IDJ: In witnessing there is nothing happening, is there?
R: No. There is no comparing and judging. A beautiful verse in the Bhagavad Gita expresses it this way: The same Prakriti (power) which functions through the body-mind of the Sage functions in every other body-mind organism.

Everyone daily experiences deep sleep, the state in which there is no sense of “me.” When the “me” disappears, the “I am,” impersonal Consciousness, is still present.

IDJ: How should one approach the turning towards one’s essential nature? Through direct seeking, perception, or the practice of meditation?
R: You can’t do anything. The question is misconceived because there is no “me” to do this or that. Either “this” or “that” will happen.

IDJ: Whatever you do is what you are supposed to do?
R: Quite right. It is irrelevant. Ramakrishna Paramahamsa reported to have said, “Be totally convinced that it is God’s will that prevails all the time, and after that you may do whatever you like.” Because whatever you think you like is exactly God’s will.

IDJ: A new term has come out in the field of American psychology called “letting go.” It is a nice phrase.
R: Yes, and I am going one step further than that. “Letting go” is a very good term, but the mind asks, how do “I” let go? You see, one substitutes one thing for another, yet the “me” remains. The answer therefore is, letting go will happen if it is supposed to happen, which is only if it is God’s will.

IDJ: Is holding on to the sense of “I-amness,” which Maharaj refers to, similar to what Ramana Maharshi calls “Self-inquiry?”
R: Holding on to the “I-amness” means letting go of the “me.” “Who am I?” is not a question to be answered by the intellect. If you stay with the question “Who am I?,” then that which is asking the question will disappear. The Maharshi makes it perfectly clear that this is not to be used mechanically, as an exercise.

IDJ: What are the obstacles that prevent one from seeing the truth of one’s existence?
R: Only one obstacle—that you think there is “someone” to surmount the obstacle. The only obstacle is the “me” who thinks “I” can do something or achieve something.

IDJ: What is the nature of the “I”?
R: The whole point is that “I” has no nature. “I” is pure subjectivity; only an object has a nature. This “I,” or “I-I,” or Consciousness, is pure subjectivity without the slightest trace of objectivity. Therefore, the question of “nature” is irrelevant.

IDJ: What is the role of the Guru in the life of a seeker? Does the Guru have to be in physical form?
R: Indian tradition says that the Guru has to be in physical form, and his presence does something to hasten the process. If this is true, one could also say that it is the Supreme Power which is seeking through the mind-body organism, which brings the disciple and Guru together.

IDJ: People often talk of Advaita (non-duality) as a path. Isn’t Advaita simply an experience, an experience of seeing that there can be no individual separate from God, or the Self?
R: Advaita is a path as long as you consider Karma (action) Yoga, or Bhakti (devotion) Yoga a path. Strictly speaking, whatever path one chooses is because that is the path the mind-body organism has been programmed for.

Editors Note: To illustrate the fact that there is no individual intention on the part of a sage, Ramesh narrated the following incident:
“Once, an elderly lady brought her sick child into the presence of Ramana Maharshi. The child, who was quite ill, became well. The woman kept bowing and saying ‘Thank you for your grace, it’s only because of your grace…’ The Maharshi simply replied, ‘There is only One. There was no sankalpa (intention) of curing your son.’ Someone else may not be cured! Whether one gets cured or not depends on God’s will and your destiny.”