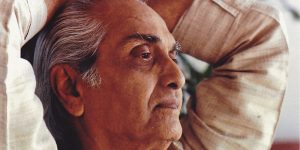 The most important event in my life has been meeting a Self Realized Jnani—Nisargadatta Maharaj—in November 1978. It was through reading an article about him in an issue of The Mountain Path (the magazine published by Ramanashramam of Tiruvannamalai, South India) that I came to know of him, and knew instinctively that meeting him would be the most significant event in my life. He lived in one of the by-lanes of Khetwadi in Bombay. When I climbed up the steps into his loft-room in the small apartment, he was sitting at his usual place on a large, thick cushion on the floor, a small old man of about 80. When I made my obeisance to him, he turned his penetrating gaze on me, and said quite distinctly in Marathi (the only language he knew well), “You have finally come, have you? Sit here,” and he indicated a place close to him in front. There was no doubt but that in this very first meeting I felt the full impact of his personality and the manner of his greeting—we had never seen each other before in this life. He died three years later and so my actual association with him extended only for a little less than three years, but the impact of it could not have been more intense if the time had extended over thirty years. It would be an understatement to say that my whole attitude to life changed radically in those three years. The most important thing I learned from him, so far as this life is concerned, is the supreme importance of apparent ordinariness, the unassuming anonymity which is like the natural protective coloring of an animal or a bird. Such ordinariness is not the assumed humility which is, in fact, actually obsequiousness, but rather what is left after the artificiality of the world is realized and therefore shaken off, a virtue that happens to be virtue because it is based on an inner conviction and not something artificially based on the expectation of a future benefit.
—Explorations into the Eternal, Appendix

Doership
You do nothing, and you don’t do nothing. You merely let whatever happens happen without any sense of having done anything. In other words, “you” do precisely what you have been doing without the sense of any “you” doing anything. Everything that happens is merely witnessed, without any comparing or judging by any “me.”

Someone with a misunderstanding about Jnana (knowledge) would no doubt be horrified to know that “enjoying life” can exist after the understanding has happened! In fact, what happens is that because of this misunderstanding (which is, of course, part of the what-is), a seeker is afraid to enjoy life, considering it a severe obstacle to enlightenment! What a joke the whole thing is.

It is not easy to forget the persistent query, “I understand, but having understood, what do I do?!” The answer is: do whatever you feel like doing—live as if you were enlightened. And then suddenly there is the answer that life goes on precisely as it is supposed to, irrespective of what the illusory individual thinks “he” is doing!
—Consciousness Writes, p.100

What is to be done? Nothing.

Then what happens? “You,” then, are free of the dualism of “me” and “not me.” “You” are at peace within, without any sorrow or doubt in mind. “You” remain firmly established in the inner silence, without any concern for your welfare, content with whatever comes along. “You” live effortlessly, without either wanting anything or deliberately giving up anything. This is brought about by the firm apprehension that everything happens in Consciousness without any effort by any supposed individual entity, precisely as a mirror reflects the objects around it without any intention. A flight of birds is reflected in the water of the lake, but the birds do not intend to make a reflection, nor does the water intend to reflect the flight of the birds.

When the apperception of Truth occurs, it is realized that whatever comes one’s way unsought must be wholeheartedly accepted and enjoyed. Nothing need be abandoned or rejected or given up, because even such renunciation would be volitional. It is realized that, while there is nothing to work for, this does not imply deliberate inaction, because deliberate action and inaction are identical. When the mind ceases to entertain any notion of doership or non-doership, all action becomes non-action.
—The Final Truth, pp. 53-54

The vocable “I”—the “me” who thinks he is the volitional “do-er”—is what might be called the operational center in the phenomenal sentient object that is known as the human being. Its functional responsibility is to organize and care for the phenomenon it controls. This vocable “I,” or the “me”-concept, attaches itself to the various emotional impulses that arise (like love, hate, fear, greed, etc.) for the protection and perpetuation of the phenomenon. It represents the psychosomatic mechanism, and this representation gives rise to the identification which is the cause of the supposed bondage. This oper­ational center is called the “head“ in Europe (what Wittgenstein calls “the little man”), the “heart” in China (physiologically more relevant), and the antahkarana (“mind” including intellect, as the inner equipment) in India.
—Experiencing the Teaching, p. 20

Effort
All positive efforts are as futile as trying to see one’s face in a mirror that is behind one’s back. It is only direct Self-knowledge, resulting from enquiry into the movements arising in one’s con­sciousness, which acts as the sadguru, the supreme preceptor. All efforts made by a supposed entity can only lead to frustration. It is only the effortless effort (passive witnessing) along the pathless path (pure understanding without a “me” as the comprehender) which can lead to the goalless goal (“That” which has always been here and now).
—The Final Truth, p. 204

Self-realization is not available to those who are “weak.” And, of course, predictably, the word “weak“ has been interpreted as being without the strength and determination to undergo a lot of discipline and hard work. Therefore seekers undergo a lifetime of seeking and still remain confused. What “weakness” truly means is a lack of courage to give up those traditional routines which were prescribed for when one was a spiritual beginner. It is the lack of courage to accept the intuitive promptings of the basic, fundamental Truth in its totality that all there is, is Consciousness.
—A Duet of One, p.97

Effort contained in illusory desire on the part of an illusory individual to achieve an illusory goal! All that was necessary was to turn his gaze inward, whereas all his effort was necessarily directed outward. Mind, when turned inward, ceases to conceptualize, and the ceasing of con­ceptualizing is tantamount to liberation because the conceptualizing itself was the creation of bondage.
—A Duet of One, p.69

What is meant by “personal effort” needs some clarification. For instance, Nisargadatta Maharaj would ask someone to practice meditation, while to someone else he might say that meditation could be an obstacle. When he recommended meditation, it would generally be to those who complained of an overactive mind always flooded with too many thoughts, much as he might have suggested regular doses of castor oil to someone suffering from chronic constipation. But those who prided themselves on their regular meditation at fixed times for long periods as a means of achieving enlightenment, were warned by Maharaj that their meditation was an impediment and an obstruction for enlightenment to happen. The difference was clear: the intent and purpose behind the meditation. In the latter case, there was an individual “meditator,” meditating with the specific intention of “achieving” enlightenment for “himself.” To such meditators, he would say, “Alright, you meditate and go into samadhi for 10 hours, or 10 days or 10 years or 100 years—but then what? You would still remain in the framework of space-time.” He would give the instance of a Hatha Yogi who asked his attendant for a meal and then went into samadhi; he resumed normal Consciousness again after 10 days and promptly asked the attendant “Where is my meal?”

Maharaj would therefore warn such meditators that meditation of this kind could be a definite hindrance apart from being useless because it could bring in certain Yogic powers at the meditator’s command, which could easily bolster up his ego and make him swerve away from his original objective which, though misguided, was nonetheless laudable. However, when someone explained that he did meditation whenever he felt like it but without any specific purpose, not meditating on anything in particular but as a means of mental relaxation, and emptying of the mind, Maharaj certainly did not discourage him.
—Explorations into the Eternal, p. ix

Humility
Genuine humility is that which is not recognized as such by the one who has it.
—The Ultimate Understanding, p. 65

Do not try too hard to show your humility. The very effort exposes your pride. True humility lies in the absence of doership.
—The Ultimate Understanding, p. 15

What is the basis on which spontaneity works so effectively? The answer in one word would be HUMILITY, but not in the sense in which it is generally used. What is usually called “humility” happens to be in fact nothing but inverted pride or negative pride, whereas the only implication of true humility is the utter absence of any entity either to be proud or not to be proud.
—Explorations into the Eternal, p.224

Joy
What happens in moments of sheer joy or pleasure? We have no difficulty in being the experience of the moment by forgetting “ourselves” (the “me” is absent and there is only the joy of the experience). The mind remains whole and is not divided from the experience. The problem arises only when there is pain whether actual or imagined, and then the vicious circle of the split mind begins its course, with the effort of the “me” to escape from the pain and the consequent tension. A conscious relaxation of the entire body-mind releases the tension—and the pain—to an astonishing extent. This conscious relaxation is the outcome of the awareness of the fear itself, together with the realization that tension can only make the pain worse. The fear is really based on the memory of past experiences and not on the past experiences themselves because those are dead. The relaxation is an expression of the willingness to welcome the new experience without any mental resistance or reservation.

What the ultimate understanding brings about is joy deep in the heart of one’s being. Such joy is pure joy. It treats alike all experiences of pleasure and misery that might appear momentarily on the surface. Such pure joy, which is like the ultimate understanding, is denoted by the traditional term Sat-chit-ananda (existence-consciousness-bliss), the very essence of the source of all manifestation.

Liberation
What the sage says between the lines in this chapter is that since what-we-are, by its very nature, is absolutely free and totally uncon­ditioned, any concept of—and, along with it, any desire for—liberation and the personal achieving of enlightenment is in itself an impediment to the impersonal apperception of that freedom. In any case, such apperception cannot be an object perceivable by a perceiver. There can only be the perceiving which itself is the Truth. In trying to apprehend Reality, the error that clouds all understanding is that an attempt is made to understand that-which-we-are (the Reality) on an objective basis whilst Reality is pure subjectivity, the only subject without the slightest objective quality. Indeed, Reality is that on which appears the temporal manifestation of phenomena which are mistakenly considered by the sentient objects as “real.”
—Experience of Immortality, p.90

From The Wisdom of Balsekar, edited by Alan Jacobs. Copyright 2004 by Ramesh S. Balsekar and Alan Jacobs. Reprinted by arrangement with Watkins Publishing, London.