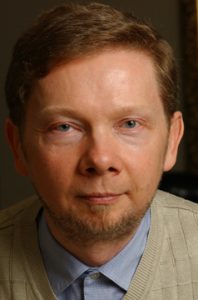 This interview was recorded in 1998, just after the first edition of the book, The Power of Now was published.

IDJ: In the first chapter of The Power of Now, you write that you lived in a state of almost continuous anxiety and occasional suicidal depression. One morning you awoke with the thought “I cannot live with myself any longer.” At that point you became aware of a difference between the “I” and the “self” you could not live with. What happened as a result of this awareness and what is the nature of the “I” that you saw as different from the “self”?
Eckhart Tolle: I actually awoke in the middle of the night with intense fear and dread. A thought kept repeating itself in my mind: “I cannot live with myself any longer.” Suddenly, I became aware of the strangeness of that thought: “If I cannot live with myself, there must be two of me—the I and the self I cannot live with.” It was almost as if a Zen koan had spontaneously arisen in my mind: Who is the self I cannot live with? There was a stunned silence, and all thinking ceased. I felt myself drawn into a vortex of energy, then falling into what seemed like a void.

The next morning I awoke as if I had just been born into this world. Looking around the room, I felt I had never really seen it before. Everything was fresh and pristine and intensely alive. A vibrant stillness and deep peace filled my entire being. As I walked around the city that day, the world looked as if it had just come into existence, completely devoid of the past. I was no longer labeling and interpreting my sense perception—an almost complete absence of mental commentary.

To this day, I perceive and interact with the world in this way: through stillness, not through mental noise. The peace also has never left me, although it has varying degrees of intensity.

At the time the transformation happened, I had no conceptual framework to help me understand or explain to others what had happened. Later, I realized that the intense suffering I felt that night must have forced my consciousness to withdraw from its identification with the unhappy self, the suffering “me,” which is ultimately a fiction of the conditioned mind. This withdrawal must have been so total that the suffering self collapsed as if the plug had been pulled out of an inflatable toy. What was left was my true nature as the ever-present I Am, the unconditioned consciousness prior to identification with form. You may call it pure Awareness or pure Being; the words don’t matter.

IDJ: You mention that the greatest obstacle to experiencing Reality is identification with the mind. This is the universal problem. What do you suggest is the most direct means of breaking this identification and ending the cycle of incessant thought?
ET: The compulsion to think and self-identification with the incessant mental noise as “me” prevent you from finding the realm of inner stillness that is inseparable from one’s true nature. Ramana Maharshi put it very succinctly: “The degree of the absence of thoughts is the measure of your progress towards self-realization.”

When you become aware of the repetitive nature of most of your thinking and so begin to observe your own mind, you are no longer totally identified with it. When the dimension of the observer or witnessing presence emerges in you, your sense of self shifts from being trapped in the mind to being the “still observing presence” beyond the mind, as it were. As this unconditioned consciousness emerges more fully, you are able to create gaps in the mind-stream, moments of deep stillness when all thinking has ceased and yet you are fully conscious and highly alert. That is the dimension of consciousness out of which all creativity arises. I call it presence. The mind-identified state is dreamlike and deeply unconscious, compared to the state of presence.

A gap in the mind-stream is created whenever your attention moves totally into the present moment. Thought needs time—past and future—to operate, and it ceases in the state of intense present-moment awareness. In the face of great danger, this sometimes happens spontaneously. The mind stops and something infinitely more powerful takes over.

There are many ways of taking your attention into the Now. For example, you may become acutely aware of your sense perceptions, so alert that all mental commentary ceases. Or you can take any routine activity such as getting dressed or washing your hands—an activity that normally would just be a means to and end—and give it your fullest attention, so that it becomes an end in itself. You will find that you are highly alert and aware but not thinking.

The most direct way of breaking identification with the mind is to inhabit the body. By this I mean to feel the body from within, to always have some of your attention in the inner energy-field of the body. Being in the body takes attention away from thinking and anchors you in the Now. Every cell of the body then participates in the state of presence. It also happens to be the most powerful means of self-healing and preventing disease from arising.

IDJ: You say that people tend to wait for an event in time to achieve the freedom and happiness they seek, that “You ‘get’ there by realizing that you are there already.” What is the nature of this realization and the way to awaken to it?
ET: Who you are, your essential reality, is inseparable from the Now. This cannot be understood intellectually, but it can be realized experientially, with every fiber of your being. How? By becoming present. In the state of full presence, there is an intense sense of joy and aliveness and of infinite depth and peace.

You see the absurdity of looking to the past for your identity and the future for your fulfillment. Phenomenal existence—the world—can be enjoyed for what it is: leela, the play of form. It holds no promise, nor does it pose a threat. This is liberation from desire and fear.

IDJ: The ego’s pursuit of pleasure represents a continual search for happiness and fulfillment outside of one’s true Being. Do any restraints need to be made on the fulfillment of desire, prior to being in a state of non-identification with the mind?
ET: Non-identification with the mind implies that a dimension of consciousness has come in that is beyond the mind: the witnessing presence. When there is no longer complete identification with the egoic mind and its seeking, grasping and clinging, the mind loses its overwhelming momentum. Desires may still be there for a while, but you are no longer possessed by them. As long as there is no witnessing presence, there is only the conditioned mind pretending to be a “person.” This is the unconscious state. In that state, nothing can be done about restraining desires. At the most, a stronger desire may push away a weaker one, such as when the desire to indulge in food is overcome by the more powerful desire to attract a mate and so remain physically attractive.

IDJ: You say that letting go of psychological time is one of the greatest aids towards living in the present, the “Now.” Do you mean we should stop identifying with thoughts of the past or future? If so, then problems would have no ability to affect us.
ET: Many people’s sense of identity is almost entirely defined by their problems. Only when there is self-seeking in past and future and inner resistance to what is do problems arise. Every problem needs time to survive. When your attention is fully in the Now, problems dissolve instantly. All that’s left is the suchness of this moment—what the Buddha called tathata. You accept what is. If a situation requires action, you act. If there is nothing you can do, you leave it alone. The false, mind-made self lives on resistance to what is. The greater the resistance, the stronger the sense of self. Life then becomes very problematic. What problem do you have right now? If you are absent—that is, if you live through memory and anticipation—you have many. If you are present, you have none.

IDJ: In answer to a question, you said “Consciousness takes on the disguise of forms until they reach such complexity that it completely loses itself in them.” Is it just the nature of universal “appearance” that makes us take form to be real? It can’t be completely illusory, for it is in essence based in Consciousness.
ET: Form is real in the same way that a knot tied into a piece of string is real. The knot’s existence seems beyond doubt. And yet it is unreal—which you find out when you undo the knot and discover that there never was anything other than the string.

So every “person” could be seen as a knot in the fabric of consciousness. Enlightenment is the undoing of the knot. You then realize you are consciousness itself and always were, even when still identified with form. Leela seems to be a game of hide and seek that consciousness plays with itself.

IDJ: What is your experience of living life free from impressions of the past and future, fully in the Now?
ET: Compulsive thinking has come to an end, which means I don’t need to think unless there is something to think about—and most of the time there isn’t. That might not get me a job if I put it in my resume, but it means that life flows with ease, free of conflict and inner resistance. To meet everything and everyone through stillness instead of mental noise is the greatest gift you can offer to the universe. I call it stillness, but it is a jewel with many facets: that stillness is also joy, and it is love.