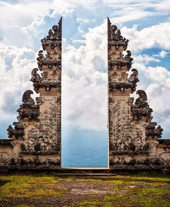 If we look carefully, we can see that everything in existence is in motion, besotted with the will to become. This is particularly true for human consciousness. The human mind has become a reflection, even a caricature, of universal movement. While to be endowed with active intelligence is natural and positive, when we become subjugated by our own compulsive thinking, we lose our connection to the basic goodness of being and the silence essential to our spiritual sanity.

We cannot experience reality outside of the individual consciousness that constitutes our unique angle of perception. Our mind is the only tool we have to recognize existence; but at the very same time, the mind is the veil that separates us from reality as it is. Rooted in interpretation rather than direct perception, the mind creates a virtual world of its own that is alienated from the whole of reality as it is. To apperceive existence in its true form, we must transcend our unconscious tendency to ceaselessly think about, label and interpret all that appears in our field of cognition. Only a still mind can see and reflect reality from a place of non-modified lucidity. The foundation of meditation is the condition of non-doing-the complete stillness of consciousness within the state of being.

Divine Passivity
The state of non-doing is the most profound experience for a human being, for it occurs only in the context of oneness with existence. It is an experience of unity, freedom and bliss. This extraordinary unity of consciousness and inactivity is not inertia, but supreme repose in the divine. It is “divine passivity,” the ultimate state of rootedness in the source and mystery of creation. To arrive at this divine inaction, the will of our individuality has to merge in loving union with the will of the beloved.

The Dynamics of Non-Doing
Non-doing represents a tremendously vibrant and dynamic condition of being. It is a state  of continuously letting go into the mystery of the now in which  the presence and  absence of the soul  merge into an  indescribable amalgam of pure existence; personal and  impersonal  meet and  unite  in the realm  beyond effort and  effortlessness.

Non-doing is a state of letting go whereby the will to be is surrendered into the abyss of universal emptiness, the timeless space of the now. Through our relative surrender, the gravitation of the beyond pulls our soul into the inner ocean of pure rest so that we can move into a place of absolute peace.

Non-doing by its very nature is beyond activity and inactivity. It is none other than reality itself― the unborn base of all-that-is. Non-doing embraces both motion and stillness, containing all manifested existence within its transcendent non-abidance. When the soul merges with the primordial essence of non-activity, her existence is transported into the beyond to embody the perfection of being. It is from the dimensionless space of pure being that all of creation is seen as uncreated, all change as unchanged.

What are the practical means to achieve the state of non-doing? From a place of clear presence, one cultivates the art of surrender. The success of this effortless effort does not hinge solely on our intention to let go, but also on the transmutation of our mind and transformation of our energy. Our  awareness and  our  energy body  have to open  up  and  shift  into  the inner  realm―our sense  of existence needs  to move  beyond the created reality  and  relative, time-bound consciousness. Since  this  transformation takes  place  on  the  subtle plane,  beyond the control of the conscious mind, the only  thing  we can  do  is cooperate through the  continuous practice  of letting go in  a space  of  patience, endurance and  submission to  the  beyond. Ultimately, the complete opening to the realm of pure being is the result of deliverance coming from the depths of the absolute reality into which we surrender.

Dropping the Doer
The ego can do many things, but it simply cannot meditate. Pure meditation is not a form of doing, but a condition of being beyond the exercise of any method. A meditator who relies on any method of meditation cannot cross into the vertical reality of the now, for the mind can only operate in the horizontal dimension of space and time. To open the space of pure meditation, the ‘doer’ must yield to being.

We should not, however, attempt to drop the doer prematurely. Since the fully mature state of meditation cannot be achieved until we complete the inner path, we need the support of the doer as we go through the process of establishing the condition of non-doing. This may appear illogical,  but  there  is a very  simple  explanation: individual effort is performed within  the sphere of the subtle  ego, an extension of the mind  that serves  as a conscious link between the subconscious self and  the inner  state.

The ego  assists  us  in  two  ways  in  the  practice  of meditation: it helps to awaken the  inner  state,  and  it learns  how  to surrender itself in order  to merge  with  that  state. To comprehend this more clearly, we must recognize that the ego is not an independent entity, but a vehicle of the soul. While the false ego only serves the mind’s agenda, the mature, conscious ego is an intelligent representation of the soul in her human personality. It is the conscious ego that becomes present in the mind and overrides the subconscious ego lost in daydreaming, the conscious ego that lets go into the inner state.

In the process of merging with the inner state, the ego does not disappear entirely, rather its motives and purpose change. Prior  to its surrender, the  ego  performs the  role  of subject,  believing  itself to be the host  of our  consciousness. But as awakening grows roots within our existence, the ego gradually moves to the periphery of our identity where it remains as a purely functional expression of the soul. It continues to support the deepening of the inner  state, but its presence grows  progressively more  transparent and  silent; it ceases to control  the process  of meditation and  begins  to humbly assist  it. Our   final aspiration, therefore, is not to eliminate the ego, but to transform it into an instrument of inner awakening. In the complete absence of ego no meditation can take place, for the soul requires its energy and intelligence to open the inner state. Only when it has fulfilled its purpose can the ego be fully surrendered to the silence of pure being. One of the principal tasks of the doer is to check the quality of meditation and gently balance the energies of doing and non-doing. The relationship between the doer and the state of non-doing actually runs parallel to that of attention and letting go. The activation of attention is a function of the doer, whereas letting go is the surrender of the doer into the ego-free space of non-doing. The doer is on  both sides of  the  equation, for  even   though he  surrenders,  the surrender itself  is on some  level  an  act of will. After  recognizing an absence of mindfulness, the  doer, or  “checker”, makes the  decision to concentrate; or, having verified that  there is a sufficient amount of presence, the  checker introduces the  intention of letting go into being. The wisdom of meditation calls for a precise balance between utilizing the ego and dropping it―they should in fact be a simultaneous occurrence.

By letting go, the ego drops itself, and an immediate opening into the state of pure meditation occurs. As  time  goes  by, however, the ego reappears, assessing the state  or wandering off into  daydreams; hence,  in the  next  instant, the ego has  to repeat the act of activating attention or surrendering. This dance of checking, becoming present and letting go takes place within an effortless, natural flow of intelligence. As our awakening deepens, the interplay between the checker and the inner state gradually merges into one movement, a movement of the now. In due time, the ego dissolves into the inner dimension to such an extent that it ceases to possess the power to assert its separate existence. Naturally, the functions of checking and cognizing still operate at times, but without the presence of an individual agent. The power of recognition and intelligence is owned by no one―intelligence moves in the impersonal awareness of pure reality.

The State of Effortlessness
The state of effortlessness is the natural condition of being, the ego­free dimension of pure meditation. If effort on the path is not eventually dropped, it is an indication that we have either not awakened to our true self, or are unable to merge with the depth of reality. The evolution into effortlessness is a natural process based on a gradual fusion of the individual with the universal.

Although there are many levels of effortlessness, the essence of the natural state is always the fundamental experience of just being. Hence, as long as we recognize the core of I am and being, we have relative access to the effortless state of pure meditation, even in the initial stages of our practice. As our practice gradually deepens and our state becomes more integrated, the natural state of being dissolves all need for exertion. We can finally rest, free of our relative self, in the fullness and emptiness of primordial consciousness.

You may find out more about Anadi at www.anaditeaching.com

From the Book of Enlightenment. Copyright © Anadi. Reprinted by arrangement with www.anaditeaching.com