“So solitary and secret, so remote and far distant from sense, that naught pertaining to it, nor any touch of created things,
succeeds in approaching the soul in such a way as to disturb it and detain it on the road of the union of love.”
—St. John of the Cross 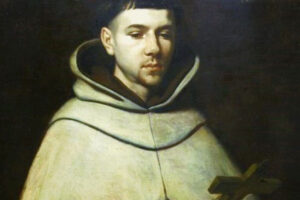 St. John of the Cross is widely regarded one of the great Christian mystics and poets. He was born in 1542 as John de Yepes at Fontiveros, near Avila, Spain. In September of 1567, he met St. Teresa of Avila and a year later took vows of the Reform, at Duruela, and became St. John of the Cross. His life was filled with challenges: Born into poverty, often at odds with church hierarchy, he was even imprisoned for a while. In some people these experiences would leave them hurt and emotionally embittered, but for St. John of the Cross, they acted as stepping-stones to greater transformation—developing a compassionate heart to those who suffer the burdens of life.

His calling was to a life of solitude, service and love, borne out of the great compassion he felt for all beings. As a prior in Granada, he did everything he could to help, with either food or money, those who found their way to the monastery gate. He especially understood the afflictions of those who suffered physically and he worked effortlessly to give them care, comfort and hope. He once asked a doctor if there was any remedy for a lay brother who was undergoing extraordinary suffering. The doctor said that there was a very expensive remedy that would only temporarily relieve the suffering, but that there was no cure. John somehow begged for the money, procured the medicine, and administered the remedy to the sick brother himself.

St. John of the Cross was a tiny man with a great heart who took great delight in making others laugh. He was very simple and believed in hard, physical labor. He was often found in the kitchen, weeding the garden, decorating the altar, making architectural plans, visiting the sick, and in the midst of it all—writing poetry and prose. When the monasteries at Granada and Segovia were being built, he joined the workmen in quarrying stone for the construction.

Accompanying the outward simplicity of his manner, his soul was on fire. Like his dear friend St. Teresa of Avila, his intimacy with God was utterly complete and infinite. Requiring little sleep, he spent much of the night in prayer, at the altar steps, beneath the trees in the garden, and sometimes at the window of his minuscule cell. In later years, his absorption was so profound that he experienced difficulty in attending to ordinary affairs, secretly having to hit his knuckles against the wall so as not to lose the trend of conversation.

St. Teresa of Avila called St. John of the Cross to become the director and confessor of the convent of the Incarnation, where he remained for over five years. St. John was then ordered by his provincial to return to the house of his profession in Medina. When he refused to do so, he was kidnapped and taken prisoner the night of December 3, 1577. He was carried off to Toledo, where he suffered more than nine months of imprisonment in a narrow, stifling cell, in a jail that was built to house the most serious offenders. It was during this period, in the midst of his sufferings, that he wrote some of his most exquisite poetry. Miraculously, in August of 1578, he escaped from prison. He tirelessly worked to establish monasteries for the Discalced Carmelites, and had to face opponents and challenges regularly. St. John did prevail in his work, bringing solace and joy to many through his attention to the poor, as well as his writings.

His well-known books, Dark Night of the Soul and Ascent of Mount Carmel are known for their depth and force, grace and energy. His poetic outpourings masterfully scale the heights of mystical revelation, bringing together sound reason and divine grace. As a poet, John’s mystical experience flows clear and fresh. His prose can get complicated and repetitious, and he made no effort to polish it. Yet, the poetry overflows into prose and prose into poetry like a circular waterfall, offering passages of power, originality and great beauty.

During the last fourteen years of his life he flowered, his themes remaining as they always had: the mysterious union of the individual with God.

In December of 1591, St. John of the Cross went to stay at the monastery at Ubeda. His leg had become seriously ulcerated and the infection had spread to his back, forming a fist-sized tumor. The prior, Fray Francisco, did not welcome the famous, learned and ill friar who came to stay with him. Fray Francisco was known to have a mean and rigid temperament, and this sick friar was a nuisance and an expense as far as he was concerned. St. John of the Cross, knowing that his time was running short, called for Fray Francisco and begged pardon for all the trouble he had caused. This profoundly changed Francisco, who himself begged forgiveness and left the cell in tears, completely transformed. That same night, when the friars began to recite the prayers for the dying, St. John of the Cross begged them to stop and asked them to read some verses from the Song of Songs. He then exclaimed, “Oh, what precious pearls!” At midnight, he died peacefully repeating the words of the Psalmist: “Into your hands, O Lord, I commend my spirit.” His last wishes were to die not as a superior, and in a place where he was unknown. His wishes were granted. For generations to come, his poetic voice will sing eternally.
—Joan Greenblatt

I did not know the door
but when I found the way,
unknowing where I was,
I learned enormous things,
but what I felt I cannot say,
for I remained unknowing
rising beyond all knowledge.

It was the perfect realm
of holiness and peace.
In deepest solitude
I found the narrow way:
a secret giving such release
that I was stunned and
stammering,
rising beyond all knowledge.

I was so far inside,
so dazed and far away
my senses were released
from feelings of my own.
My mind had found a surer way:
a knowledge by unknowing,
rising beyond all knowledge.

And he who does arrive
collapses as in sleep,
for all he knew before
now seems a lowly thing,
and so his knowledge grows so deep
that he remains unknowing,
rising beyond all knowledge.

The higher he ascends
the darker is the wood;
it is the shadowy cloud
that clarified the night,
and so the one who
understood
remains always unknowing,
rising beyond all knowledge.

This knowledge by unknowing
is such a soaring force
that scholars argue long
but never leave the ground.
Their knowledge always fails the source:
to understand unknowing,
rising beyond all knowledge.

This knowledge is supreme
crossing a blazing height;
though formal reason tries
it crumbles in the dark,
but one who would control the night
by knowledge of unknowing
will rise beyond all knowledge.

And if you wish to hear;
the highest knowledge leads
to an ecstatic feeling
of the most holy Being;
and from his mercy comes his deed:
to let us stay unknowing,
rising beyond all knowledge.