An ancient worthy said, “If you can recognize the inherent nature while going along with the flow, there is neither joy nor sorrow.” 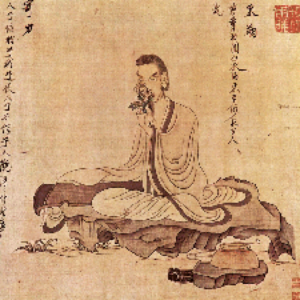 Ta Hui was born in 1088 during the Chinese Sung dynasty. At that time, Ch’an Buddhism was flourishing and its impact was felt at every level of society. Even at an early age, Ta Hui exhibited the signs of a remarkable being. At the age of sixteen, he left home; a year later, he became a monk.

With great sincerity, Ta Hui traveled throughout the land, following the traditional practices of Ch’an, and visiting various teachers and monasteries. He was eventually instructed by the great Ch’an master, Chan T’ang, who recognized Ta Hui’s light and depth. As he was dying, the Master told Ta Hui to go and find Yuan Wu (whose recorded teachings form the Blue Cliff Records).

Yuan Wu was a strict master and tested his students often. Ta Hui gave himself nine summers as a hermit to reach complete understanding. Yuan Wu once quoted a saying of Master Yun Men: “East Mountain walks in water.” Ta Hui replied forty-nine times, but each time Yuan Wu didn’t approve of the answer and again quoted Yun Men: “I am not this way. If someone asks, ‘What is the place where all the Buddha’s appear?’ I just say to them, ‘From the South comes a fragrant wind, producing a slight chill in the recesses of the palace.'” At that moment, a dawning of realization broke through and Ta Hui believed he became enlightened.

However, Yuan Wu was still not satisfied with his student, and said: “It wasn’t easy for you to get to this stage—too bad that having died, you are unable to come back to life. Without a doubt, words and phrases are a great disease, but haven’t you heard the saying “Hanging from a cliff, let go.”

And agree to accept the experience
After annihilation, come back to life—
I couldn’t deceive you.

You must be aware that this truth exists.” Ta Hui replied, “Just based on today’s attainment, I’m already joyous and lively; I can’t understand anymore.” Yet the firm taskmaster Yuan Wu wanted to push Ta Hui over the edge, so whenever he entered the room he would say, “Having words or wordlessness, both are clinging vines on the tree.” And as soon as Ta Hui began opening his mouth to reply he would immediately say, “Wrong, that’s not it!” Finally, Ta Hui said, “This truth is like a dog looking at a pan of hot oil, wanting to taste it but unable to, wanting to give it up but unable to.” Yuan Wu said, “You’ve described it very well-this is the unbreakable trap, the thicket of thorns.”

One day Ta Hui said, “I heard that when you were at Wu Tsu’s, you asked about this saying. I wonder what Wu Tsu said.” Yuan Wu laughed, but did not answer. Ta Hui said, “At that time, you must have asked in front of the assembly. What’s stopping you from saying it now?” Yuan Wu said, “I asked the meaning of ‘Having words or wordlessness, both are like clinging vines on the tree.’ Wu Tsu said, ‘Describe it and it can’t be described completely, depict it and it can’t be depicted accurately.’ I also asked, ‘How is it when the tree falls and the vines wither?’ Wu Tsu said, ‘It comes along with it.'” At these words, Ta Hui was released, saying “I understand.”

After his penetration, Ta Hui was accepted as heir to the Lin Chin School. He eventually became a revered teacher with thousands of students of his own. In 1163, Ta Hui told the monks, nuns and laypeople that flocked to him, “Tomorrow I’m going.” Towards the next dawn, after writing his last words and letters, his attendant asked the Master for a verse. Ta Hui said, “Without a verse, I couldn’t die.” He then took up the brush and wrote:

Birth is thus
Death is thus
Verse or no verse
What’s the fuss.

He let go of the brush and passed on. The writings in Swampland Flowers are records of his teachings kept by his disciples.

Mindlessness
To Hung P-ch’ong
An ancient worthy had a saying: “To look for the ox, one must seek out its tracks. To study the Path, seek out Mindlessness. Where the tracks are, so must the ox be.” The path of Mindlessness is easy to seek out. So-called “Mindlessness” is not being inert and unknow­ing like earth, wood, tile, or stone; it means that the mind is settled and imperturbable when in contact with situations and meeting circumstances; that it does not cling to anything, but is clear in all places, without hindrance or obstruction; without being stained, yet without dwelling in the stainlessness; viewing body and mind like dreams or illusions, yet without remain­ing in the perspective of dreams’ and illusions’ empty nothingness. Only when one arrives at a realm like this can it be called true Mindlessness. No, it’s not lip­—service mindlessness: if you haven’t attained true Mindlessness and just go by the verbal kind, how is this different from the perverted Ch’an of “silent illumination”? “Just get to the root; don’t worry about the branches.” Emptying this mind is the root. Once you get the root, the fundamental, then all kinds of lan­guage and knowledge and all your daily activities as you respond to people and adapt to circumstances, through so many upsets and downfalls, whether joyous or angry, good or bad, favorable or adverse—these are all trivial matters, the branches. If you can be spontaneously aware and knowing as you are going along with circumstances, then there is neither lack nor excess.