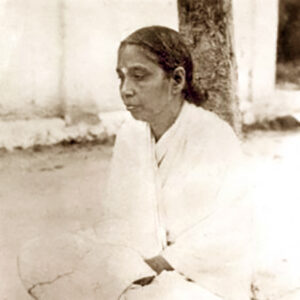 Life-experiences are often fraught with countless complications and “apparent” difficulties. Yet, such experience can also serve as “leaps into the Infinite.” This point is beautifully demonstrated in the life of a simple Indian woman named Suri Nagamma. Some people reading this article may be familiar with her book, Letters from Sri Ramanasramam, a profound collection of letters written to her brother during the time she lived at the Ashram of Sri Ramana Maharshi. Compiled in the 1940s, this book represents the poetic and heartfelt accounts of life with one of the twentieth century’s greatest sages. Many may not be familiar with her earlier life. From the beginning, it was outwardly filled with great challenges, challenges which served to strengthen her and build an inner peace and resilience.

Suri Nagamma was born in a small village in the South Indian state of Andhra Pradesh in August of 1902. Her father passed away when she was ten years old. In keeping with the customs of the day, she was married when she was just eleven. Nagamma was prepared to live a life of service to her husband, when one year later he suddenly died of smallpox. At the tender age of twelve, lifelong widowhood was thrust upon her. She was too young at the time to understand the full implication of this; she simply felt heartbroken. Though she continued to grieve for the husband she briefly knew, as the years passed she immersed herself in listening to religious discourses and singing devotional songs. In her village, women were not usually educated, but with some help and her own grim determination, she not only learned to read and write, but excelled at it.

She was fascinated by the book Pothana’s Bhagavatham, reading it over and over. One day as she was reading this book, a great desire to find a true teacher overwhelmed her. She began to weep for hours and ultimately fell asleep. During sleep, she dreamt that she found her teacher—a sage seated cross-legged. He was facing south and a great illumination surrounded him. From then on, the vision of this sage was always with her. She kept this dream to herself and felt that a day would come when she would finally meet him.

In 1918, she and her dwarfed brother (whom she looked after) went to stay with another brother, Sri Seshadri Sastri, who was a lawyer in a nearby village. The practice of the day dictated that widows shave their heads. Somehow Suri Nagamma did not feel inclined to do this and because of this bold action she brought great criticism upon herself from orthodox relatives and friends. Soon after, Nagamma discovered that she had a natural gift for writing poetry, and she began to write and read sacred texts; this is what sustained her throughout this period.

In 1923, her dwarfed brother died and she was released from the responsibilities of her family. She wanted to find an Ashram—a hermitage—where she could simply live out the rest of her life. Her family refused to let her go, so she spent time serving the sick. Yet, even as she poured herself into this selfless service, she did not experience the peace she craved; the pain of mental dissatisfaction continually burdened her. It was during this time that she heard about a sage who lived at the sacred hill Arunachala. However, it took her ten more years before she finally arrived at his hermitage. During those ten years she sunk into a deep despair, which weakened her body to such an extent that she became completely bedridden. When her brother had a chance to meet Ramana Maharshi, he felt this was an opportunity for his sister to find a little solace and relief. He decided to send her there alone. She describes her first visit:

“There was absolute silence and peace in the Hall. After ten minutes, I lifted my head and found that Bhagavan was looking intensely at me. His compassionate look calmed my troubled mind, but I could not withstand the intensity of it and so I involuntarily bent my head again . . . Though Bhagavan had not spoken to me at all, I was deeply impressed by him. I found in him a resemblance to the Mahapuru-sha (great teacher) who once came into my dream and also saw all the attributes of a Jivanmukta (realized being). He seemed unattached to anything, like water on a lotus leaf, sparkling in the sun.”

After some time, Suri Nagamma had to leave the Ashram to attend to some family obligations. While at home doing her household duties, her mind was filled with Ramana’s presence. She became “outwardly” absentminded and her relatives started to whisper and gossip that going to the Ashram had made her mad. They couldn’t understand the nature of her madness! After her family duties were finished, she returned to the Ashram for good.

Suri Nagamma soon discovered that in the presence of Ramana, the various spiritual practices she had followed throughout her life were directed toward profound Self-enquiry. She began reading all the written works by Ramana, and about his teachings, and went to him if she had any doubts. At times, he would admonish her saying, “Why do you take any notice of all these doubts?”

One day, a learned man began discussing complicated spiritual topics. When he left, she happened to meet Bhagavan walking to the cow shed, and asked him about this topic of conversation. Before she could finish her sentence, he said, “Why do you worry about it?” She said quietly, “You have been discussing this for the past four days so I thought I should discover something about it by asking you.” “What an idea!” Ramana replied to her sternly, “He was asking me about what is written in the Sastras (scriptures) and so I was giving him suitable replies. Why do you bother about all that? It is enough if you discover who you are.”

A few days later, when there were not many people in the Hall, Sri Ramana said to her with great compassion, “That is only a notion. When the body itself is just a notion, will that not be a notion, as well?”

In this way, Maharshi guided Nagamma and she began to experience relief—as if an immense burden had been lifted from her shoulders. One day, her brother asked her to record what took place in the Hall daily. At first she objected, saying there are many people recording these events, but her brother persisted and asked her to simply write him letters. The first letters were read to all in the Hall. Ramana remarked that Suri Nagamma was donating to others the knowledge she gained at the Ashram. Often going without sleep, Suri Nagamma poured out her heart by lantern after a full day spent in the Hall.

Eventually, there were enough letters to publish a book in her native language, Telugu, and later they were translated into English. The book was printed and sent to the Ashram, where it was read aloud. During the reading, a few people in the Hall became envious and asked that the reading be stopped. This was the beginning of Suri Nagamma’s trials over the “letters” and her publication of them. She was eventually ordered to stop writing letters by the Ashram management. For some time, Suri Nagamma complied, yet she was continually encouraged to continue by other devotees, since they knew her motives were not fame or fortune but purely as Ramana himself had stated, “to donate knowledge.” And Bhagavan seemed to encourage the letter writing as well by relating to her, in great detail, whatever happened in the Hall when Nagamma was not present. Eventually, she reinstated the late-night vigils of letter writing. If someone asked her if she was writing her letters she lied, stating she was not writing anything down. This went on for quite awhile. One day, she felt tired of lying and went to Ramana. At that moment, he was speaking about the story of a sparrow and Garuda and remarked, “People who do good work and have a mind to choose self-enquiry never give up their work, although they feel it to be a burden.”

After Ramana’s death, Suri Nagamma stayed at the Ashram for a number of years, reading her letters every afternoon to whomever stopped by. When she became ill, she had no recourse but to return to her family. She was determined to live alone, so when she recovered she returned to her native home and built a small room on her brother’s property in the nearby village. It was here that she lived out the rest of her life.

At the end of her book, My Life at Sri Ramanasramam, she writes:

The message “find out who you are” that Sri Bhaga­van gave to the world is the essence of the Vedas. When one pursues the enquiry “Who am I?” in all earnestness, one discovers ultimately that one is Brahman (the Absolute) itself. Only when one realizes that there is nothing else but the all-per­vading Brahman can one conduct oneself in the world with a feeling of Samatvan (equality). That is the significance of the enquiry “Who am I?” Many may object that this is easily said but well-nigh impossible to realize. That is true to a certain extent, but scriptures emphasize the fact that with just a little control of mind, one can pro­gress on the road to Self?enquiry. Bhagavan has written a song whose import is that this path is very easy. If mind is not allowed to stray after the senses and directed to inquire into its true nature, certainly the Heart is reached and the Self perceived.

I first met Suri Nagamma during the winter of 1979, during the time Sri Ramanasramam was about to celebrate the one-hundredth Birth Centenary of Sri Ramana Maharshi. She was a grandmotherly figure who walked slowly through the Ashram grounds with a humble gait. If I wasn’t introduced to her, I may never have met this simple woman. Before arriving at the Ashram I had written to her and received a few letters, which I saved and treasure to this day. When I finally met her, her love, simple heart and fragrance of peace were most touching. We met on a number of occasions and, though she spoke no English, her native Telugu words were translated. She spoke of Ramana as if he were seated in front of her. Her image was eternal, abiding and filled with grace, often tears flowed as she spoke.

One evening, I was to meet a friend in the room next to Suri Nagamma’s. For some reason, I arrived early and waited on the steps. As I sat there, Suri Nagamma returned from dinner. She saw me sitting on the steps and invited me into her room. This was the first time we were alone. Of course, we couldn’t speak to each other. As I sat on her bed, I saw her eyes sparkle and she began singing a beautiful rendition of a hymn to Ramana, and at the end of each verse was a refrain “Arunachala Shiva” which I joined in. Then I sang a song for her. Our heart-to-heart meeting was quite touching. When our songs ended, we sat together in the most exquisite silence, which was as full and rich as the jasmine-scented night that surrounded us; only the sound of crickets and bullock carts lumbering down the road filled the evening air. It was the sound of eternal silence—the all-embracing consciousness.

I met her again in Bangalore for the last time. Her outward life never got any easier. She accepted it all with perfect peace, equanimity, and composure. She never questioned her life— the way her life went was as it should be. She showed us all that living in the present moment, without regret, holds within it the seed of abiding peace.