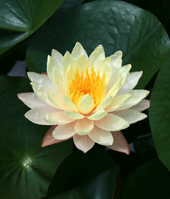 Until the last century, the theoretical framework of Advaita Vedanta was preserved and presented mainly within the esoteric spiritual teachings of India. Traditionally, these non-dual teachings were not imparted freely. An apprenticeship of twelve years’ service to a spiritual teacher or guru was customary, after which the guru determined if the student was ripe to be introduced to the non-dual perspective. While this might seem extreme in this current freedom-of-information era, the practice nevertheless did contain its own wisdom. The pointers of non-duality are of little use to the immature mind and, in most cases, have an adverse effect and actually delay maturation. It is essential to work from the level of consciousness at which one has stabilised. Immature seekers want to bypass the proper development of ego in order to avoid confronting the shadow aspects of the psyche, but do not have the capacity to perceive their own whereabouts on the progressive path. On being told that they are God, or that there is nothing to do, or that they do not exist, etc., they grasp at these concepts and overlay them on unexamined personal beliefs in separation. At this particular stage, introspection or personal development is perhaps more appropriate alternatives for seekers.

Immature seekers also often pursue a spiritual role model/guru in search of love and acceptance. But, without sufficient self-awareness, they fail to recognize this motivation and so their innate lack of self-love perpetuates itself. Inevitably they find reasons to later reject the guru, since an immature mind always demands conclusions – about themselves and about their guru – which act as continued validation and defense for the fragile ego. The dualistic polarities of right and wrong, real and fake, manifest in full force so long as the ‘I’ concept seeks its footing in erroneous opinions. Frequently jumping from one guide on spiritual matters to another, such seekers can understand neither the guidance nor the guide due to their substratum of immaturity.

In Advaita Vedanta, there is no support for the immature seeker and when resistance to what is presented by the guru builds, the ego defends itself in every possible way. Thus spiritual bypassing is created, whereby spiritual teachings are used as an avoidance of egoic issues. Ironically, this strategy has emerged as a dualistic counterbalance to the contemporary global availability of non-dual perspectives. Immature seekers with no knowledge of the subtleties of mind dismiss as madness what they do not understand. The teachings and actions of the guru are interpreted perversely and, in defending itself, the seeker’s ego is strengthened. All of this is simply because mind is not yet sufficiently turned inward.

Everything in the phenomenal world has its place, just as every pointer to that which is beyond mind is useful in its own time. Maturation of mind continues indefinitely until all beliefs in separation are dissolved. The discernment to know when to effectively use, and when to drop, spiritual practices is inactive in the immature mind. Consequently, certain spiritual techniques such as of self-enquiry cannot ‘work’ until the seeker is ripe.

In India, the theory of non-duality is housed within Hinduism. Prayer, yoga, service, the cultivation of devotion, and the practicing of good works are not seen in any way as being in opposition to the ultimate realization of Truth. All levels of maturation are accommodated within this unified system. When mind is unready to respond to non-dual pointers, then these spiritual practices have their place. Currently, there is such an abundance of options in the West that it is not clearly seen that every spiritual practice of merit ultimately prepares mind for its own dissolution. As each has its place in the greater scheme of things, it is important to participate in spiritual practice with the ultimate goal in view. For example, exploring past lives can equally easily build-up the sense of ‘I’ or dissolve it.

Let the central focus be the seeing through of false identification with the body-mind organism. In all of this, the wise option is to follow what makes sense internally and not to pursue a conceptual explanation merely attractive to mind. Allow your spiritual practice to be guided not by desire, but by an intuitive sense that there is a refinement or purification of mind inherent in it. Whatever reduces the sense of the personal ‘I’, whatever reduces identification with thought, is indeed a useful practice. All of this activity will eventually spin itself out. It is important for this maturation to unfold naturally, since the organic falling away of spiritual practice happens only when mind is appropriately ripe for the attitude of non-duality to take hold.

In all of this, the paradox cannot be avoided that the realization of Truth is not dependent on any spiritual practice or maturity of mind. The dance of the progressive path happens in a time and space, which is the product of erroneous thinking and misidentification. This misunderstanding gives rise to the idea of a personal ‘I’, an imagined individual trying to reduce himself in order to remember what/who he is. The reduction of the ‘I’ is in fact not directly related to the seeing of Truth – it is simply the activity that happens as the illusion of life is weakening.

The direct path does not make allowances for the personal ‘I’. Irrespective of the practice advocated, it offers no result or conclusion: it can at best be described as a technique which destroys the idea that there is someone using it. Here it is recommended to pay no attention to mind, as though having zero tolerance for the appearance of the illusory world. However, the immature mind will interpret this suggestion with a practice of having a zero tolerance attitude, and this in turn strengthens the idea of an ‘I’ doing something to gain something better. And so it can be said that spiritual practice can indeed help to dissolve the ‘I’ but, on the progressive path, it can also perpetuate the ‘I’. It is wise, therefore, to participate in spiritual practice aware that it cannot of itself lead to the recognition of Truth. And yet, phenomenally there is great value in reducing identification with thoughts and thus lessening beliefs in duality. Let spiritual practice continue until it is seen to be a happening in consciousness and that you are not the one practicing. When there is no attachment to the spiritual practice, this shift can come about. Let it be seen that everything happens by itself, and that there are no individuals doing any of this.

The significance of silence is not to be underestimated!

Any movement of a personal ‘I’ simply endorses the idea that there is an ‘I’ who is ultimately seeking Truth. Non-duality emphasizes that there never was an ‘I’, that the very idea of anything existing is false. There is nothing of any substance or authenticity in whatever appears as real.

For those drawn to the non-dual perspective, be aware that there is no longer a formal context in this framework to allow for a maturing of mind. Recognize that both spiritual and religious practices have their place in enabling each seeker to respond optimally to an internal pull, and that it is up to seekers to find their own way of engaging with teachings delivered in this manner. Likewise, non-duality must be considered as a disposition of the mind. It is not appropriate for application to worldly affairs, and the wisdom to deal with such matters must therefore be developed independently. This approach ripens the intellect to the point of being able to yield to a receptivity of mind intrinsic to a non-dual perspective, and it is your responsibility to discover what works for you.

In spite of all of this, how could you ever imagine to be apart from Self? To be what it is that you are requires no effort because you are always that which is prior and beyond all concepts. You cannot be other than that. Yet so long as you imagine yourself to be other than what you are, the spiritual search has its place. To know that which you are, there must be two selves for one to know the other. The search for truth does not end in finding truth phenomenally: there is nothing gained anew in Self-realisation. All that happens is the complete dropping of identification with thought.

Thus what is called ignorance is but the unsatisfactory attempt to identify Self with what is not Self. Your intellect, and the one that suffers from the desire to find Truth, must realize that what can be known is only what you are not. In this knowledge all that presents as phenomenal reality is laid bare in the seeing that this cannot be what you are. Attachments to the false individual persona must fall away. What remains cannot be known by that same faculty which has brought you this far.

Intellect can only operate in the context of subject and object. Within this dichotomy, there must be something to be known or understood and a separate individual with something to gain in acquiring this knowledge. Let all ideas drop about enlightenment and retain the sense of direction which arises from this goal. Allow a softness to arise in place of the eager and greedy seeking of the highly sophisticated tool, which is mind. Develop the wisdom to know when to pick it up and when to lay it down. Anything that can be known cannot be what you are. What you are is prior to all dualistic explanations and pointers. Self is within the direct experience of all, but not as one imagines it to be: in the absence of all phenomena, imagination and intellect have no place. Self is only as it is.

Don’t ponder on this or try to figure it out. It is not understandable at any level deeper than intellectual theory. Mind cannot fathom beyond this because, to do so, intellect requires an object of perception for its activation in thought. Understand and accept the role and limits of the enquiring mind. It is a tool that serves well on what is known as the progressive or gradual path. When identification with the body and thought ceases, it is understood that Truth is never lost or found but that what you really are simply reveals itself. There is nothing new to learn in this revelation, it can manifest as an aligning with an inner knowing that has always been integral and intuitive.

Jac O’Keeffe is originally from Ireland. She travels throughout the world sharing with others the way to openness and freedom. Her extensive background in energetic healing gives her a unique ability to pinpoint where people are stuck due to identified thought—whether it is karmic, energetic, or psycho-spiritual-emotional in nature. Jac always points to the unlimited movement of consciousness, and to that which is prior to consciousness itself—all facilitating the pull toward self-inquiry, awakening, self-realization, and to that which is beyond all concepts.

From Awakening to Liberation, a forthcoming book by Jac O’Keeffe. Copyright © 2014 by Jac O’Keeffe. Reprinted by arrangement with FliHi Media. Visit www.jac-okeeffe.com for a future book release date.