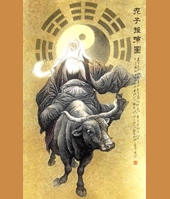 Winter passed, and it was spring. On the third day of the third month, Wang secretly left home and journeyed twenty miles to the bridge where he had bid farewell to the two immortals. He sat by the bridge and waited patiently; looking around from time to time to make sure he did not miss any traveler passing through the area. Suddenly he heard someone call his name; looking behind him, he saw his two old friends dressed in rags. They laughed and said, “Master Wang has not only kept his appointment but arrived early!” Gold-Is-Heavy and Empty-Mind Ch’ang walked toward the bridge. Wang immediately dropped to his knees before them and bowed many times. “Great Immortals, it is an honor to see you again. Forgive my stupidity and my inability to recognize who you were when we last met. Today I am fortunate to see you again, and I hope you will instruct me and lead me to the Tao.”

The two beggars laughed heartily. Wang could see an aura of light surrounding them. Their eyes shone brilliantly, and their look penetrated his entire being. Suddenly the two beggars were transformed into two men with striking appearances. One was dressed in a simple short tunic and pants. His tunic opened to reveal a tuft of hair on his chest. The hair on his head was neatly tied into two knots next to his ears. His beard was long and flowing. He held a goose-feather fan and carried a gourd on his back. This was none other than the immortal Chung-li Ch’uan. The other man was dressed in a long yellow Taoist robe. Around his topknot was tied a scarf. His face was rosy and shiny. His beard was long and jet black. His gaze was penetrating and his composure stately. Tied around his back was a long sword to cut through the illusions of ephemeral things. He was the Patriarch of Pure Yang, Immortal Lu Tung-pin. Wang immediately prostrated himself.

Seven Taoist Masters is an ancient Chinese folk novel that imparts the wisdom of Taoist philosophy and practice in a very readable and entertaining format. In 1988, Eva Wong’s teacher Moy Lin-shin said to her, “You must translate the book called Seven Taoist Masters, for it is one of the best introductions to the teachings of Taoism.” The story chronicles the experiences of Master Wang Ch’ung-yang and his seven disciples.