“Since we are ‘not other’ than the Self, we are condemned to eternity.” 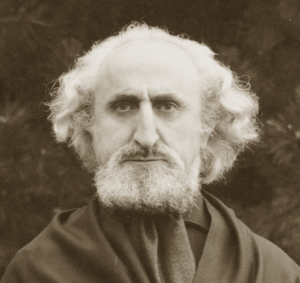 The faculty of “seeing God in everything” can be independent of all intellectual analysis; it can be a grace, the modes of which imponderables are and which springs from a profound love of God. When we say “intellectual analysis,” we do not mean speculations in the void: the “categories” of which we have spoken are by no means “abstract,” but their perception evidently depends on a discernment which appears to be abstract from the point of view of sensations and which, though far from delighting in sterile dissections, is nevertheless obliged to “separate” in order to “unite.” Separation and union alike are both in the nature of things, each, it might be said, on its own level; the eye, the better to see a mountain, needs a certain distance; this distance reveals differences; it permits visual analysis, but, at the same time, it “unites” or synthesizes in furnishing the adequate and total image of the mountain.

To see God everywhere and in everything, is to see infinity in things, whereas human animality sees only their surface and their relativity; and it is to see at the same time the relativity of the categories in which man moves, believing them to be absolute. To see the infinite in the finite is to see that this flower before us is eternal, because an eternal spring is affirmed through its fragile smile; to see relativity is to grasp that this instant that we are living is not “now,” that it “is past” even before it has arrived, and that, if time could be stopped, with all beings remaining fixed as in a river of ice, the human masquerade would appear in all its sinister unreality; all would seem absurd, save only the “remembrance of God” which is situated in the immutable.

To see God everywhere is essentially this: to see that we are not, that He alone is. If, from a certain angle, humility can be called the greatest of the virtues, this is because it implies in the last analysis the cessation of egoity, and for no other reason. With a small change of viewpoint, one could say as much of each fundamental virtue: perfect charity is to lose oneself for God, for one cannot be lost in God without giving oneself, in addition, to men. If love of one’s neighbor is fundamental, on the strictly human plane, it is not only cause the “neighbor” is in the final analysis “Self” as are “we,” but also because this human charity—or this projection into the “other”—is the sole means possible, for the majority of men, of being detached from the “I”; it is less difficult to project the ego into “the other” than to lose it for God, although the two things are indissolubly linked.

Our form is the ego: it is this mysterious incapacity to be other than oneself, and at the same time the incapacity to be entirely oneself and not “other-than-Self.” But our Reality does not leave us the choice and obliges us to “become what we are,” or to remain what we are not. The ego is, empirically, a dream in which we ourselves dream ourselves; the contents of this dream, drawn from our surroundings, are at bottom only pretexts, for the ego desires only its own life: whatever we may dream, our dream is always only a symbol for the ego which wishes to affirm itself, a mirror that we hold before the “I,” and which reverberates its life in multiple fashions. This dream has become our second nature; it is woven of images and of tendencies, static and dynamic elements in innumerable combinations: the images come from outside and are integrated into our substance; the tendencies are our responses to the world around us; as we exteriorize ourselves, we create a world in the image of our dream, and the dream thus objectified flows back upon us, and so on and on, until we are enclosed in a tissue, sometimes inextricable, of dreams exteriorized or materialized and of materializations interiorized. The ego is like a watermill whose wheel, under the drive of a current—the world and life—turns and repeats itself untiringly, in a series of images always different and always similar.

The world: it is as if the “conscious Substance” which is the Self had fallen into a state which would split it up in many different ways and would inflict on it endless accidents and infirmities; and in fact, the ego is ignorance floundering in objective modes of ignorance, such as time and space. What is time, if not ignorance of what will be “after,” and what is space, if not ignorance of what escapes our sense? If we were “pure consciousness” like the Self, we would be “always” and “everywhere”; that is to say we would not be “I,” for that, in its empirical actuality, is entirely a creation of space and time. The ego is ignorance of what is “the other”; our whole existence is woven of ignorance’s; we are like the Self frozen, then hurled to earth and split into a thousand fragments; we observe the limits which surround us, and we conclude that we are fragments of consciousness and of being. Matter grips us like a kind of paralysis, it imposes on us the heaviness of a mineral, and exposes us to the miseries of impurity and of mortality; form shapes us according to such and such a model, it imposes on us such and such a mask and cuts us off from a whole to which we are none the less tied, though at death it lets us fall as a tree lets fall its fruit; finally, number is what repeats us—inside ourselves as also around us—and what, in repeating us, diversifies us, for two things can never be absolutely identical; number repeats form as if by magic, and form diversifies number and must thus create itself ever anew, because the All-Possibility is infinite and must manifest its infinitude. But the ego is not only multiple externally, in the diversity of souls, it is also divided within itself, in the diversity of tendencies and of thoughts, which is not the least of our miseries; for “strait is the gate” and “a rich man shall hardly enter into the kingdom of heaven.”

And since we are “not other” than the Self, we are condemned to eternity. Eternity lies in wait for us, and that is why we must find again the Centre, that place where eternity is bliss. Hell is the reply to the periphery which makes itself the Centre, or to the multitude that usurps the glory of Unity; it is the reply of Reality to the ego wanting to be absolute, and condemned to be so without being able to be so . . . The Centre is the Self “freed,” or rather that which has never ceased to be free—eternally free.