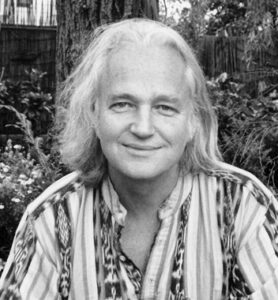 Lex Hixon was a longtime acquaintance of ours. Many people came to know and respect Lex through his radio program In the Spirit, which aired each week on the Pacifica radio station in New York City. Every spiritual teacher in the early 1970s seemed to find a voice on his program. Lex simply facilitated these programs like an open reed, allowing the teachings to flow without interference.

Lex’s literary accomplishments were many. His published works include Coming Home (Experience of Enlightenment), Heart of the Koran, Mother of the Buddhas, Atom from the Sun of Knowledge, Great Swan, Mother of the Universe,and his latest book, Living Buddha Zen.

When we met Lex and his wife Sheila, we were charmed by their utter sincerity and earnestness. Through the years we tried to keep in touch with Lex, and when The Inner Directions Journal was launched he was most supportive, offering excellent advice and happily joining our Editorial Advisory Board.

The following is an excerpt from Lex’s part of an extemporaneous talk, “Open Space.”

“Someone asked me, after reading in Bawa Muhaiyaddeen’s book Truth and Light that if there are 60,000 methods of meditation, whether he needed to practice all of them to reach open space. We are open space right now. It has always been and will always be.

“If we get a picture of open space, a sort of blueprint of the way that it relates to being fully human, then we are already coming away from it. Explanations are helpful, and religions are helpful. But if we stay by the door, if we do not go across the threshold and enter consciously, then we haven’t come to fruition. When you enter open space, you find everything already there. The spiritual heart of any great noble tradition indicates that open space is total humanity. It is completely present to every being. Sages, both men and women, have entered through doors of all religions, and occasionally they enter it through the spontaneous door that manifests without any particular tradition. The ones who have entered that open space are awakened as it.

“Open space is the secret teaching within and beyond them all. But you cannot walk around saying, ‘I have the secret teaching.’ Other than the sheer arrogance of it, it also doesn’t work well because of our socially and personally conditioned reality. Every sacred tradition has some reference to this conditioning. We cannot claim to experience unconditional love when we are still highly conditioned beings. First, we must know open space.”

A Brother, A Friend, A Great Swam
By Ahamed Muhayaddeen

Lex Hixon (Sheikh Nur) discovered the unity of reality within himself, spent his life studying and writing about it, and served it by helping to awaken it in others. A few days before he shed his physical body, I met with him and he, as always, demonstrated the living power of the teaching by reaching out and giving comfort. With beautiful crystal-clear blue eyes and a gentleness as tender as human gesture permits, he expressed concern that I should inform our brothers and sisters of the deep state of peace he was in and that there was no cause whatsoever for sadness. Surrender ripens the heart with sweetness.

During 1988-1989, Lex and Sheila hosted a series of symposiums in his home in Riverdale, New York, with participants from diverse traditions. There would be five or six of us gathered in his spacious living room overlooking the expanse of the Hudson River, with at least twenty-five of our friends gathered to watch and listen to sincere heartfelt sharings on the issues that polish the heart. The last session, of course, was on death, and Lex opened by saying:

“If someone discovered the definitive cure for cancer, people would flock to it and would feel that they were living in a Golden Age of civilization. But they will face death even after having cured their cancer. What if sacred traditions know the way of passage through death itself and know that death is not the tragic threat it appears to be? This is so much more revolutionary than any sort of healing or resolution of finite, temporal, historical problems. Possibly society even today, even contemporary religious people, have forgotten that the so-called riddle of death has been solved and resolved by the great traditions. We have knowledge of an actual way of passage through the Red Sea. We know the precise way to go through death, which is millions of times more sophisticated than sending a rocket through a window of opportunity, to reach Mars. But the modern mind is so impressed by space travel and such things that it has lost the sense of the extraordinary sophisticated wisdom of revealed traditions about how to travel through death.”

I love Lex. We shared wonderful experiences at the feet of His Holiness Bawa Muhaiyaddeen and with Sheikh Muzaffar Al-Jerrahi. Ours was an ever-fresh friendship for over 24 years. We shared in a duet of wisdom at the Parliament of the World’s Religions where we jointly presented “The Transformation of Becoming Completely Human: The Open Space Beyond Religion,” shared a grand pilgrimage to India for the 7th World Conference on Religions (at Delhi in 1994), and then on to an even grander pilgrimage in Mecca and Medina. The last journey was a joyous celebration, two brothers dancing with open hearts across continents and galaxies of grace, singing in silence the praises of the one Being in all beings, the one Love in all loves. But, we were like kids; like Hope and Crosby on the road, or occasionally Laurel and Hardy. How can one express the value of a journey of spiritual awakening with a brother, over such a long period? Lex touched so many of us with riches from many spiritual traditions. I am only one in a large chorus, singing a song of gratitude.

What Did He Find?