“It is false to speak of Realization; what is there to realize? The real is ever as it is.
All that is required is to cease regarding as real that which is unreal.”
—Ramana Maharshi 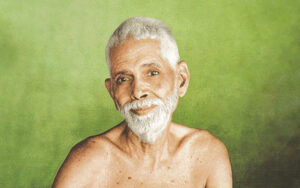 In the ancient township of Tiruchulli, in a dry, dusty corner of South India, legend speaks of Lord Shiva saving the land from a deluge on three separate occasions. By planting his trident into the earth, Shiva created a hole for the water to escape into. At the place where he planted his trident stands the large temple of Buminatheswara (Lord of the Earth). Just across the street from this old temple is the house where the young Venkataraman was born in December, 1879. Though destined to become one of the great sages of the twentieth century, there were no obvious signs that would reveal his forthcoming realization.

Venkataraman’s family moved to the famous temple town of Madurai after his father passed away, so that the family could be under the watchful eye of a paternal uncle. It was here that the “Awakening” would take place, that waves of spiritual fervor would overtake him while reading the Periapuranam, the lives of the sixty-three Tamil saints. From his childhood, there was a continual inner throbbing of “Arunachala, Arunachala,” as if the Self—his real Being—was reminding him of his forgotten nature. Once, when a visiting relative recounted his recent pilgrimage to Tiruvannamalai (a temple town where the solitary, sacred hill Arunachala rises above the South Indian plains), young Venkataraman became astonished and overwhelmed that Arunachala was in fact a place on earth—a place one could actually go to.

Shortly after this time, around the hot month of July, at the age of 16, Venkataraman faced his own mortality. One day, when everyone else was away from his home, the young boy was overcome with the fear of death. Rather than panic, or retreat into fear, Venkataraman had the remarkable presence of mind to face the situation, then and there. He dramatized the death occurrence to be able to help bring the experience to its ultimate conclusion, even holding his breath, stiffening his body, and allowing no sound to escape his lips.

To die before death is to face the void, the emptiness in which the content of the mind—that which creates and sustains the sense of individuality—has no ground on which to survive. It is rare for one to face the void without recoiling back into form. Venkataraman, like Buddha, was determined to stay the course. Upon firm investigation into the nature of his “I-sense,” his former self died, and the infinite Self, the Eternal “I,” revealed itself.

Venkataraman stopped going out to play with friends and preferred solitude. He says of this period, “I would often sit alone and become absorbed in the Self, the Spirit, the force of current which constituted me. I would continue in this despite the jeers of my elder brother who would sarcastically call me ‘Sage’ or ‘Yogi’ and advice me to retire into the jungle like the ancient Rishis.”

When his brother reprimanded him in August of that year, for behaving like a sadhu while enjoying the amenities of home life, Venkataraman recognized the truth of his brother’s words. He rose to his feet, claiming that he had to return to school, and left for Arunachala. He said of his state at that time, “When I left home, I was like a speck swept on by a tremendous flood; I knew not my body or the world, whether it was day or night.”

Providence guided the young sage on his journey home. The vibration in his heart, of “Arunachala, Arunachala,” was his guiding light.

Absorbed in the bliss of Being, he sat and slept in various places around the Hill and in the temple—sometimes moving when groups of young rascals would pelt him with stones. Just as a light cannot be hidden under a bushel, the light of Venkataraman’s realization became manifest, attracting a few earnest seekers. Those were people who wanted to bathe in the peace of his presence; a peace that settled upon one—lifting one from the cycle of thought.

Ganapathi Muni, a great Sanskrit scholar and yogi, had his doubts cleared by the young sage who was then living on the slopes of the Arunachala Hill. Deeply impressed and touched by his great wisdom, the Muni proclaimed that Venkataraman should hence be known as Bhagavan Sri Ramana Maharshi.

Eventually, a small hermitage was built on the upper slopes of the hill. Years later, when Ramana moved down the hill, the devotees followed and new accommodations were constructed around him. This was to become Sri Ramanasramam, the ashram that hosted (and still does) thousands of seekers from all parts of India and the world.

Throughout the years, Ramana never asked anything of anyone. He never traveled, gave formal talks, or wrote books. He spontaneously answered questions asked of him and was unconcerned regarding the comings and goings of visitors. Yet, he meticulously attended to detail when engaged in the work he did each day. Whether it was preparing food in the kitchen, stitching a notebook out of leftover paper, or going through ashram proofs, Maharshi always taught mindfulness by example. What’s more remarkable is that throughout all the years he lived at the Ashram, he never had a private room or separate accommodation. He slept and lived in the Hall—the same location that visitors occupied days and evenings with him. Only much later, toward the end of his life, in 1950, when his health was frail, was a small room constructed for his use.

The legacy of Ramana Maharshi is the same now as it was in his lifetime. He clearly and steadfastly turns questioners back to their Source. He asks us to “Find the doubter,” for “When the doubter ceases, all doubts will cease.” Inquiry into that which we call “I” is his primary teaching. Find out where this “I-sense” rises from—that is, the Source of all thought, of all existence (as we create it). He often said, “There are not two ‘I’s,’ one to realize the other.” Whoever came to the hermitage to sit in Ramana’s presence—whatever their religious or cultural background—all felt he belonged to them. And indeed he did, for “I” is common to all people, and the investigation into its true nature reveals a Unity that is universal—beyond mind-made differences.

Over the years, the teachings of Sri Ramana Maharshi have spread to all corners of the world. The directness and simplicity of the approach appeal to many people, especially today. Since wherever we go, our own Self is always available, there are no special requirements for investigating who we are.

One of the great collections of dialogues with Ramana is Talks with Sri Ramana Maharshi. A Western edition of this comprehensive work published by Inner Directions. Carefully recorded by Munagala S. Venkataramiah, Talks reveals the incredible singleness of purpose with which Maharshi compassionately and steadfastly guided, and continues to guide, seekers.