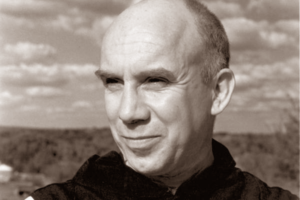 Each spring, a Christian/Zen retreat is held at Gethsemani Abbey. Zen Master Dae Gak and Brother Anthony participate each year. These selections are from Br. Anthony’s talk at the 1997 retreat.

I think Thomas Merton really saw that in turning to the east we stand to experience a great enrichment. In opening ourselves to other traditions, we see much more deeply into our own tradition. This deepening of one’s own tradition is the most important thing that I have experienced. You cannot know Zen and Christianity from the outside. By internalizing, you receive the wisdom of the Zen and Christian traditions, and something new comes out of that. It is like having a bottle with two different substances inside; the chemical reaction produces a third.

In this time of spiritual renaissance, there is a whole evolution of consciousness—a meeting of religions and a tremendous spiritual enrichment that facilitates coming into our own unique way. What I share is something that may resonate with your own search, because when any one of us goes into what is deepest, we touch that which is universal in every human being. The approach I will share with you is one I have been sitting with for some time now. It was expressed in the words of the Dalai Lama during his opening talk at the Parliament of religions. He spoke of a meeting he had at a Benedictine monastery in Europe. He was taken to meet a hermit who had lived in a cave for almost two years and subsisted on little more than bread and water. The Dalai Lama asked him, “What did you do all that time?” The hermit simply replied, “I meditated on love.”

Meditating on love expresses to me everything I find meaningful in Christian practice. My teacher and mentor, Daniel Walsh, said, “The only grace you need is the question ‘Who am I?’ The answer to that question is your metaphysical meditation on the ‘primacy of love in existence’.” What does the “primacy of love in existence” mean? In the Upanishads, there is a verse that reads, “This is full, That is full. From fullness, fullness proceeds. Removing the fullness from fullness, fullness alone remains.” So, it means awakening to that fullness of reality that just is. Jesus appeared to give us the experience of that fullness. That is the whole meaning—to understand Jesus in any other way is incomplete. He prays, “As the father has loved me, so do I love you. Abide in my love.” What does “abide in my love” mean? Father is a word for Source. Jesus was a being who was totally transparent to Source, and his mission was only to awaken us to being one with that Source. Hence he says, “That they may be one as we are one.” This is the very essence of every human being, one’s birthright by the very fact of being created. Another powerful expression used by Jesus is “I have come from the Father, I return to the Father.” Being from Source, transparent to Source. This is what is meant by primacy. To meditate on the primacy of love in existence is to know one’s self as Source.

For me, the most important aspect in coming to this realization is the question: “What is it that really empowers practice, what is it to meditate on the primacy of love?” For me, it is intuition into the nature of Source. We are that outpouring that which springs from the mystery of love itself. Daniel Walsh spoke about creation this way, “There is no reason for creation; love alone accounts for the universe.” So we truly know ourselves from that mystery of Source, in the complete reasonless outpouring. The reasonless outpouring of that Source is the very fact of our existence; intuitively knowing this is true knowledge of our self.

As you hear my voice at this moment, you exist as That. Any other perception of yourself is mistaken. I was greatly touched by a video I recently viewed on the teachings of Ramana Maharshi—someone who has been a great inspiration for me. The video began with a photograph of his face, then a narration of his words, “Whatever be the means adopted, you must at last return to the Self. So why not abide as the Self here and now? What is not permanent is not worth striving for. You are the Self, you are already That.” This is our work, to perceive That.

I’ve been quite taken by Rumi and his marvelous poetry. One of Rumi’s poems says the same thing about this primacy of love. He writes, “You were born of the rays of God’s majesty and again the good fortune of your auspicious star, so how long will you suffer at the hands of nonexistent things? Come, return to the root of the root of your own self.” This sums up everything I believe that we are attempting to do here, to “return to the root of the root of your own self.” The crisis we face is one of perception. From very early on we have been conditioned to perceive our self from impressions outside our self; it is inevitable and it creates inner conflict. This is with us as long as we keep investing our perceptions in impressions from outside; “what a person did to me, what a person said to me, what others think of me —” all of these. This is not the root of who we really are.

All of our experiences, whether pleasurable or painful, reflect our own deepest nature—our Buddha nature, our Christ nature, our nature as image of God. Because of early conditioning, we have identified with the pleasure-pain mode of perception. The mind creates these conditions that make us suffer. It is very important to see this—how we are being robbed of the experience of what is the deepest and truest part of ourselves. A truly authentic way of expression is to experience oneself as being an image of God; the experience of unconditional love and unconditional Being.

At this moment, there is only the outpouring of love. As you and I sit, there is that original act outpouring itself in love for all beings, only wishing “May all beings be free. May all beings fully be.” This is the nature of existence, to fully be. Just Being; there is nothing greater than this. To bring energy to our practice, we turn to the root of the root of our own self. This requires a lot of attention because ego conditioning is very subtle; while going out the front door, it enters in the back door. If I’m honest with myself, I know this happens every day. You can observe this in your own mind. To be truly wise is to really know that we are the root of the root of our own self.

What do we really need to transform our perception to just being in this moment? As long as our energies are entangled in outside impressions, emotional reactions, and belief systems, we continue the wheel of suffering. Only by returning to our own root can we manifest as Source and express our deepest being in everything we do. To really make this perception our own, we have to abide as Self as our own root, and know there has never been a time we have not been this.

In the video of Ramana Maharshi, there was a segment in which the accomplished practitioner and learned scholar, Ganapathi Muni, felt he was not making much progress in spiritual practice. With great emotion, he approached Ramana and asked, “What is Practice?” Ramana gazed at him intently and said:

Upon hearing these words, the Muni was awakened in a manner and exclaimed, “No longer is your name Venkataraman, but Bhagavan Sri Ramana Maharshi.”

This idea of the mind being absorbed into Source, into the Heart—even through a mantric sound—is the mystery of the deep Self. Zen Master Dae Gak has always spoken about deep listening. We were talking recently and he said something that deeply moved me: “The only ‘way,’ is to turn the faculty of hearing inward and listen deeply.” In the previous example, using a mantra helps point one’s attention to the very Source whence it comes. This is the primary point, the primary act of creation. And from that boundlessness (in the Christian tradition, God’s love) rises the only purpose for creation—ecstatic love that wants to give itself away. We come into being so we may experience that fullness, that light and love that is beyond comprehension.

Another verse of scripture that speaks to me very deeply about practice is the account of Christ’s crucifixion, his death, and the breathing forth of his being. He became the unbounded fullness of existence and then reappeared to communicate that fullness to others. The only language used to describe this is, “He appeared to me.” Saint Paul says, “He appeared first to James and to Cephas, to the five hundred at one time, and last of all he appeared to me.” To say, “He appeared to me,” means the experience of the radiant glory of God that is beyond speech and comprehension. It means the glory of seizing the totality of one’s being. At one point, Saint Paul says, “That I may know as I am fully known.” To know that love beyond knowing—beyond knowledge—is what we are talking about; it is the inner mystery of our being. To know our self truly, as we are in this moment, as we have always been, without condition, is why we are here and why we work together and empower each other.

I would like to close with a poem that expresses everything I have tried to say here today. It is from the mystic, Hildegard of Bingen (1098 – 1179):

Holy Spirit
Giving life to all life
Moving all creatures
Root of all things
Washing them clean
Wiping out their mistakes
Healing their wounds
You are our true life
Luminous, Wonderful

Awakening the heart from its Ancient sleep.

Brother Anthony is a Trappist Monk. Anthony was opened to Thomas Merton’s insight of the true self and Eastern religions by Merton’s close friend, Daniel Walsh. Recently, Br. Anthony has taken the Zen training precepts, under the tutelage of Zen Master Dae Gak.