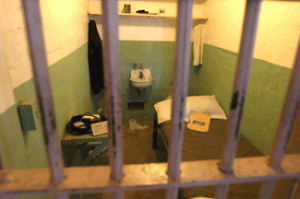 J. was a man of about sixty, gray haired with a gentle, open face. I stood up, shook hands, and sat down with him at the small square table. We exchanged some small talk to begin with but soon enough got on to what really interested us both—Who we really are.

I asked how long he would be in prison. “Probably for the rest of my life,” he told me. Yet throughout our meeting, I did not detect one hint of self-pity in him. In fact, quite the reverse was true—I sensed a quiet joy and peace. J. was moved not just by the fact I had taken the trouble to visit him, but also by the beauty and infinite depth of what we were sharing. And he was also astonished, as I was, by how easy it is to see one’s no-face. “It’s so simple!” he exclaimed. “But I guess it just had to be this simple!”

From the point of view of everyone else in that cafeteria, we were simply two men talking together. And yet each of us was consciously the divine, consciously containing the cafeteria and all the “other” people in it. We were discovering we were the Source of it all. And from this indivisible Source, we were exploring and enjoying two unique views out into that room and into the world. After some final words, J. and I stood up and shook hands. And then we hugged one another.

I joined the other visitors leaving. We crowded into the small room between the sliding doors. Through a window, we could see the prisoners now left alone in the cafeteria, sitting there, waiting, before they were allowed to leave—not, however, through the door we had passed through, but through the metal door at the other end of the room. It was a heart-wrenching scene, for their wives and families and for myself. And then I caught sight of J. Though he was sitting among the other prisoners, he was alone, quietly looking down. I’m sure he was seeing Who he really was. I was, too. And then I was walking out of the prison, climbing into the bus with the other visitors, picking up my car keys at the reception center, driving away from the prison . . . I was free to leave. J. wasn’t. Yet we were both conscious of the freedom of our true identity.

Shortly after I arrived home in London from my travels around the world, I received a letter from J.

First, let me say what a great pleasure it was meeting you! Your visit grounded me in the practice of Seeing. I know that I am Alone in this, but all the same it’s nice not being alone—and there you were, sitting across from me and glowing with Seeing! How wonderful! Since your visit, I’ve shared the pointing experiment with another friend, and he immediately “got” it. I’m not sure what he’ll do with it, but it certainly startled him. More like knocked his socks off! I keep thinking about what you said about God waking up.”

In his book The Trial of the Man Who Said He Was God, Douglas Harding wrote about a fictional character imprisoned while facing the charge of blasphemy. In those days—in the novel—blasphemy was a capital offense. To all his accusers, the accused appears, of course, as just a man—a man falsely claiming he is God. But the accused points out that when he attends to what he is for himself—as First Person Singular Present Tense—he is not a man. He is God. Amongst many witnesses called to testify against him is his jailer, who confirms to the prosecuting counsel that he has seen the accused “in prison.” If the accused were really God, as he claims he is, then—the jailer agrees—no-one would be able to contain Him within the four walls of his cell, for God is boundless. Obviously—as third person—the prisoner is indeed imprisoned within his cell. But in his defense, the prisoner shows the court a drawing to prove that as Who he really is—First Person Singular Present Tense—he is not in that prison cell: the prison cell is in Him. As you see in the drawing, the Prisoner is not contained within his cell—the nearest wall is missing. The Spacious, Transparent, Boundless One at this end of the prison cell is not in the prison. Uncontainable, he has escaped—before he has even been imprisoned. This One—and this One alone—is absolutely and unconditionally free.

Richard Lang is the coordinator of The Sholland Trust in the U.K. He recently visited J. Amberchele in prison. This adaptation is from Richard’s account of that meeting.