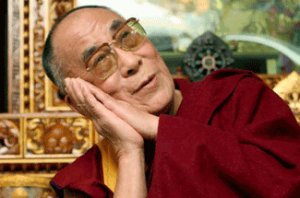 My involvement with the Dalai Lama had begun in 1979, several months before His Holiness’s first U.S. visit, when a planner for the trip came through town to organize events.

The planner was charming, European, and tired, and because this was to be the Dalai Lama’s first American tour, he wanted everything to be perfect.

“Yes, I think this will do nicely,” he said, having examined our house, but with impeccable discretion. “His Holiness could use a few quiet days here.” A friend who knew the organizer had brought him over on a whim, simply because we had a new house with a reasonable view. It was a small house. It was a simple house. But it was better, I supposed, than the vibrating-bed motels that were the alternative in the area.

The Dalai Lama! I barely knew anything about him; in fact, I had never been particularly interested. But the prospect of having the spiritual leader of Tibet spend the night in my house began a deep alchemy within me.

And so I began to clean the house. For months. Absurdly and uncharacteristically. All my small plastic spice boxes were scrubbed with a crisp green toothbrush. Rectangles of graying sponge festooned every room.

“The Dalai Lama doesn’t care about your mason jars,” a friend said in some exasperation as he watched me wipe two years of basement dust off them. Of course I knew that. And I began to suspect that I was helplessly acting out, in a confused, suburban way, the ancient rite of purification that precedes initiation by a great spiritual master. Almost all the sacred traditions prescribe ritual cleaning and purification before any spiritual endeavor. In retrospect, I am delighted that my hapless Pine Sol ritual, unconsciously produced as it was, nevertheless seems to have worked.

On the day that His Holiness was to arrive at our house, I fed coffee to three amiable security men in my kitchen. Nice guys. “Tie-bet,” one said. “Isn’t that in Africa?” Involved in a crash course on Tibet, its history, and proper forms of address, none of us was ready when the doorbell rang. Dropping a sponge, I took a deep breath, and went to open the door.

There was a maroon robe, a shaved head, a pair of very serious black oxfords, and a broad palm extended toward my damp one. The Dalai Lama grasped my hand, looked into my eyes for a few seconds, and then moved quickly into the house.

There were attendants; there were security men; there were sheriffs doing whatever sheriffs do. None of this I noticed; I felt like I was in some kind of ecstatic shock. Later, someone told me that I gracefully showed His Holiness to his room, returned with an extra towel, and brought him a buttered bagel.

It was only that night, as I lay awake in a lumpy borrowed bed, that I had time to wonder what had happened to me after I opened the door. All I knew was that the Tibetan leader had truly looked at me and in so doing had changed my life utterly. Every cell in my body felt as though it were vibrating. And I felt ecstatic, and joyful, and so utterly fulfilled that it occurred to me that I could die without regret right there and then on the broken springs. This is the peak experience of my life I thought, although I had no idea what “this” was. “Banal thought,” I said out loud, and laughed, because I did not even need to forgive myself for it. I felt utterly transformed, and radiant, and baffled.

The ecstasy faded after a month, but the link with the Dalai Lama remained. I began editing books for Snow Lion Publications, a publishing house specializing in Tibetan topics, and eventually edited several books for the Dalai Lama.

To all appearances I was deeply involved with all things Tibetan, yet somewhere within me lay a breathless area of claustrophobia. Finally it came out.

“Your Holiness,” I said one day, as we sat together in a plush reception room. “Your Holiness, I feel so much love for you, so much deep connection, but . . . “

He gently lifted an eyebrow, and waited.

This was difficult for me. “I have tried to follow the Tibetan Buddhist system, to do the practices. I’ve taken initiations.”

Both of us looked at Benji (my young son), who was providing soft brmm-brmm noises for a small metal truck that he was running back and forth on the rug at the Dalai Lama’s feet. His face was averted from the spiritual leader’s gaze, as it always was. He had once explained to me that His Holiness’s face was far too bright to look at.

“But the Tibetan system,” I resumed, “seems so foreign to me. All the structure and ritual. I’m more comfortable with the directness of Zen Buddhism, but even that . . .”

“What way would you like?” the Dalai Lama asked.

He turned and looked into my eyes in silence. A minute passed.

“Simple,” he said, suddenly smiling. “I will do what I can to help you.”

Now, several years later, I had found a simple path, but the Dalai Lama was far away in India. There was no-one who could provide me with a stamp of guru-authenticity. I would have to work this one through by myself.