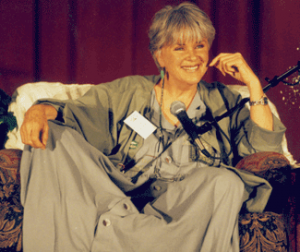 I first met Byron Katie during 1996, in San Diego, California. My first impression was of her hands: they were beautiful, graceful and flowing. I immediately liked her. The next time I saw Katie was at a public meeting. During the talk, I had the remarkable experience of watching myself speak. It was as if I became her. I was sitting “here” watching me speaking “there.” I fell completely in love and decided that even though I had the whole weekend planned, I would drop all of it and stay with Katie. I attended Katie’s weekend workshop and found that the “Work” she speaks of was surprisingly helpful to me. I thought I had “done it all,” but discovered otherwise; there was still plenty more to be “undone.” I had glimpsed my true Self a few years earlier, which greatly helped in freeing me from much of the ego’s play. I hoped that through Katie’s Work, I could play a “better,” more harmonious game.

Katie is really a mystery. On the one hand she appears so ordinary—a pretty woman in her mid-fifties. Her speech is filled with down-home language, and she often refers to her visitors as “sweetheart.” On closer examination, however, her physical appearance reveals an internal light that shines through remarkable blue eyes that are steady, clear, and bright. There is great sweetness about her, and The Center for the Work is open to everyone who would like to be with her and participate in the Work. The atmosphere at the center and around Katie is always casual, relaxed, and very joyful. A lot of spontaneous singing and joking often takes place in her presence. At the same time, I have had profound experiences of deep silence, just being in her presence.

It has been said that at the time of her “awakening” experience she weighed two hundred pounds—hard to believe since just the day before, while walking in the desert, I could hardly keep up with her! After her experience she needed to learn language all over again in an effort to find a way to be understood. During the subsequent three-year period, Katie saw her mind in a new perspective. She said it took these three years to fully “undo” the belief systems surrounding her relationships, and that once “undone,” the process was complete.

I spoke with Katie in a natural foods store/restaurant, over the noise of a speaker system that played rock-and-roll music, regularly interrupted by “clean up on isle seven” messages. I also spoke with her at The Center for the Work, while sitting on her bed in the morning, Katie still in her pajamas.

During one of these talks she spoke to me about her life prior to the awakening experience. “I perceived that things were not right. I was living in a state of suffering and more suffering. After my [awakening] experience I could see that there was always suffering, but I did not know the difference before that time. It turned out it [the suffering] was due to an accumulated belief system that I was attached to. For seven years I experienced a great paranoia, the last two of which were spent mostly in my bedroom. I would just stay in my room because I felt safer there. I had much more control of my belief systems there because less was going on. What I really wanted was Truth, but there was no way I could know what it was or how to find it. I did not have a teacher; I didn’t know if any existed. I knew about psychologists and therapists, but those were for other people, not me. Aside from what I learned in Sunday school, I had no reference for a way to freedom, a way out of this [psychological] hell. And ‘I’ was the hell that I needed to find a way out of. It was not outside of me, but within me.

“I was in so much pain that it [the pain] finally manifested itself as screaming. The act of my ‘interpreting’ what was arising was the suffering. And what arose was a belief system about what the screams meant. Both my husband and son became frightened and began calling hospitals, psychologists, and psychiatrists, trying to talk to anyone they could find. Finally, they reached a psychologist who talked with me on the phone. Though his approach was scientific and therapeutic, what I experienced was love. I didn’t know who I was talking to then (and to this day neither my husband nor son can tell me), but it was love on the other side of the line, and I experienced it that way.

“Later I phoned our insurance company, who referred me to a therapist who phoned around, and found that the only facility my insurance would cover was a little halfway house, specializing in a twelve-step program for alcoholics, drug addicts, and people with eating disorders. One of the requirements for admittance to the halfway house was to undergo a hospital-based physical exam. At the hospital, a doctor tried to give me a physical exam and I knew if he touched me, I would kill him. I think he knew it, too, so he didn’t touch me—and they waived the physical.

“I was lying on the floor of the attic in the halfway house. Some of the women there wanted me out because they were afraid of me. Later, I learned they used to booby-trap the staircase from the attic, because they were afraid I would come down at night and hurt them. During this time, all I understood was that ‘I hated you, and you hated me.’ I was clear about that, very clear. I felt I wasn’t worthy of a bed so I slept on the floor, where I was sure I belonged. Total depravation, but real. So, I was lying on the floor, up in the attic, and the best way I can express the experience is: ‘I died. I woke up dead.’

“While on the floor, I opened my eyes and found I was awake. I simply became ‘clear.’ There was a cockroach crawling over my foot and the interpretation of what that was, was not mine; it was no longer ‘my’ foot or ‘my’ thinking; it wasn’t ‘me.’ I was not ‘any-thing,’ and from that day to this it has been the same. I literally died. I was asleep for forty-three years. I woke up every day and never knew I was asleep—I did not know that anyone was ‘asleep.’

“When I ‘woke up,’ I opened my eyes and saw the foot, saw the cockroach, and I knew none of it was real. I knew the storyteller was not real, and so what came through me was laughter, endless laughter. It had all been a joke, and ‘I’ was the joke. I noticed that as my foot moved there was action, yet ‘I’ wasn’t any of it. And it is continual amusement, like being in the movies all the time.

“I saw the ‘narrator’ of my story and could see that it wasn’t true. I began to see ‘who am ‘I’ without the belief; ‘who am I’ prior to the belief?’ Then this fell away also, for who is left to inquire? Because there is no individual to ever answer that question, if a person holds his or her integrity with the inquiry, it’s over. That’s the death I experienced.

“I flunked the halfway house, I can tell you that up front. They said I was not fit to be released.”

When I asked Katie if other people noticed that something had happened to her, she said:

“Yes, there was an attraction immediately. Rather than being repelled and afraid, people were attracted and secure. At least that is how I experienced it. I was That. There was nothing that I wasn’t. I didn’t perceive any difference between a tree, a person, my house or your house, my hair or your hair, femininity or masculinity.

“What I can say is, ‘I am a lover of All, I am That.’ This cannot be a thought or a non-thought, though it includes thought and no thought. Whatever appears is myself. I am whatever appears. To know ‘That’ is to be it, all and nothing. It always sounds like a riddle when speaking of the unspoken. After this experience I relearned to speak, because every word out of the mouth was not mine, it was just happening, and I would try to ‘monitor’ it.

“What do you get for holding a belief? You get separation, matter, and a world that has no reality. Inquire ‘Who would ‘I’ be without the belief?’ The One that is prior to everything. The inquiry allows you to have a sweet, wonderful, and painless life, and to continue into infinity if you care to go there. Your truth sets you free. Your truth is equal to mine. It is the same freedom, the same enlightenment, no higher or lower. I am you there, now. Love joins.”

On another occasion I asked Katie if she still did the same physical things she did before her awakening.

“Absolutely. Nothing changes; we just stop identifying with that which we are not. We just enjoy the unfoldment.”

Anatta is a massage therapist. She is in the process of writing a book to be called The Ordinary Buddha. This article is an edited selection from one of many “conversations” to be included in this forthcoming publication.