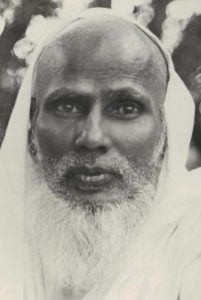 “If for example a man should come heavily burdened with goods then there must be someone to help him unload the goods, so that the assistance of someone else is imperative. But if a person should come unburdened without any goods, then there is no necessity for a helper to unload the goods. It is only when a heavy burden is carried on the head that one finds it most difficult to sit down or stand straight, or bend or walk, or do anything, so that the assistance of someone is solicited to unload the burden. An individual who has no burden-nothing-is free because his Ego-the ‘I’-has died with its complement, the nafs (worldly desires). And it is such an individual who develops the awareness that just beyond, only He exists; he came, he learnt his lesson, he realized that there is nothing he could carry away with him when his time came, so that he carries nothing, and he is nothing, and therefore he is in the position to see Him, like a race-horse running a race from the starting point, and comes back to that point knowing that the race is over, and awaits its reward on winning the race. A burdened horse cannot run swiftly and, surely, it cannot win a race. And such is the difference, the distinction between Hyat or Life and Mowth or Death. If we run our own race in this fashion, and eliminate the ‘Ego’ or the ‘I’ factor during our life on earth we say that we have gained tangibly, and we may be said to have ‘died before death’.”

Penetrating to the One, which sustains each person, the Self of each self, begins with the negation “La.” The entire path is expressed in “La Ilaha Ill Allah.” (Affirmation of Reality; Literal: No god, except God; Sufi: Nothing exists except God, You are God; or, I am not, Only God exists; or, There is no reality, but Reality.) Before the affirmation of the reality of God, the negation through experiential knowledge of the transient is imperative. To negate, to penetrate to essence, and to realize our actual nature requires an assessment.

We need to analyze what we think we are and, most importantly, who is the knower of this knowledge. This way, we can discriminate between what is transient (that which we claim to be) and what is permanent. There is an ancient five-element metaphor to help us discern (al Furqan).

We construct identities based on elemental energies, and these structures can be categorized as earth, fire, air, water, and ether. A very brief description of these false identities could include the following: “earth” relates to our sense of being a form and having weight; “fire” relates to our feeling of being energy and all of our passions; “air” relates to all of the thought forms and self-images with which we identify ourselves; “water” relates to the pull of emotions, attachment to our personal life and our blood ties. It relates to the pull of sexuality and the attachment to the body. “Ether” relates to all of our spiritual aspirations. Each of the elements, which constitute the structures of the school of the world, is microcosmically understood through understanding the school of our own body. Investigation into these elemental energies and forms is an enormous and valuable study. This investigation reveals what we are not. We then gain a clearer understanding of passing phenomena-images that perpetually change and upon which our faith cannot rest.

When the heart is refined like a mirror, then the forms that pass before it are known as what they are-images appearing in the mirror. Each moment different images appear but the mirror remains clear and pure. When consciousness attains its original purity, like the clear glass of a mirror and the mercury of God’s qualities are placed behind that clear glass, the mirror of the heart correctly reflects the forms of the world. The exquisite school of the world reveals its meaning. However, when we paint these images onto the mirror of the heart and attach ourselves to thought forms, especially the self-image of our own face in the mirror, then the way of knowing that reveals the mystery of God’s presence within creation is occluded. The purified heart reveals a glorious dimension of our humanity, one that is realized by living within recognition of the harmony of lives and the oneness of life itself. A person whose heart knows this unity loves others as oneself.

The forms arising from mind and desire have no permanence. These images that pass before the mirror appear to be outside, but outside of what? Where exactly is consciousness and where within consciousness is the self? A person who knows that all consciousness is God’s, that the images of the world are not reality, is able to surrender attachment to those images, particularly the image of self. This realization contains a state of freedom where there is love with such clarity and vigor that all doubt, anger, vanity, pride, jealousy, envy, and hastiness melt away, and only compassion and kindness remain. A person who is so pure in intention that only goodness flows from their actions will lose the “I” and gain “Him.” What is lost is the self that changes; what is found is the Self, unchanging and infinite. What is lived is service and immeasurable wonder.

Having met a man who lived in a state of illuminated absorption, I can testify to its reality. Bawa Muhaiyaddeen, who surrendered his service to humanity with his body on December 8, 1986, told me the following story:

There were five men who kept crossing a river. They would cross the river and then return to the side on which they had begun. A Fakir came along, saw them, and asked, “Why do you keep going back and forth across the river?” They replied, “Well every time we go across we leave one of us on the other side and we have to return to retrieve him.” He said, “Well, I can solve your problem if you will give me a stick and just follow my instructions.” They crossed over and he said, “Show me what happens.” One of them would stand aside, count the others off, and say, “You see there’s only four of us.” So the Fakir took a stick and said, “I’ll prove to you that all five of you got across.” And he smacked each one of them. Each one counted themselves off and they came up to all five. They were amazed and thankful. Aware that each had crossed over, they could continue their journey.

As illustrated in Bawa’s story, we keep trying to cross over into the realm of the unseen where the path of purity that leads to Source is. But, we return to the shore of the world regularly because we are trying to cross without that awareness that can transcend the five fools of the five senses or the five elements. Spiritual experiences and aesthetic experiences are like crossing the stream, but there is always a sense that we have left something back in the “world.” Thus, we return to the realm of mind and desire, the playground of the senses. The Fakir, who is unattached to this world and fully aware of a state of being not dependent on the five senses, hits each of these five, awakens them and makes them realize that they cannot go back to the world to seek Truth. The realization that each sense is caused by God, depends on God and is alive by and through God changes our direction from the love of “I” to the love of the Beloved.

It is the awakening by the sixth level of consciousness, that witness-self existing independently of the five senses, which is required to go on the journey. Unlike the five senses, it does not waver according to joy and sorrow, for it remains like a mirror allowing each event to simply pass before it, observing, witnessing, analyzing and choosing the goodness of each moment.

As we set out on the journey we begin pursuing pleasure, but pleasures can only go as far as the senses and the intellect. If we have discernment, we will cross the river that divides egoism from the awakened life. We will then pursue happiness based on the Divine—a happiness that liberates us from egocentricity, and is based in Love. Then the heart will open, and like an unfurled sail, the wind of grace will flow through. Grace (God’s rahmat), is forever being showered upon us. It is a wind that blows perpetually-a principle through which creation operates and is sustained. It is eternally present but can only be experienced by the heart that is open. Through grace, wisdom is obtained.

If wisdom were received through personal effort it would only increase pride, bringing us back to egocentricity. Wisdom, when granted, creates a state of humility within its recipient. It is a state of awareness that is free from joy and sorrow and infused with the power of light and love. When the connection between man and God is perceived within, the state of wonder and innocence, the very freshness of life itself is known. Each life has this potential and each moment has this intrinsic freshness.

To make this journey, the house that is built around “I” and “you,” “mine” and “yours,” race, class, religious bigotry and arrogance must be vacated. It need not be redecorated with unending dogmas and spiritual experiences. Ultimately, when death comes knocking there should be no one home.

The bliss of knowing that “knowing” is only in God increases our surrender. It is not created by our practices. It is self-revealing, self-emergent, self-sustaining. In fact, all consciousness rests upon and arises from God-consciousness. There is no consciousness outside of this, nor does anything exist apart from it. The technology of powerful discernment cuts through each perception and each moment, allowing one to search deeply for the treasure point of life. Bawa Muhaiyaddeen said:

“We must split open the love we have for each thing in our life and examine what is inside. We must open each tree, fruit, flower, our lives, our sexual pleasures, gold, our wealth, our houses, everything we look at with our eyes and our minds. If we dissect them all and look inside, we will eventually realize that there is only one kind of love, and that is not something we see externally. When we truly perceive that wonder, we will exclaim, ‘My God!’ That love is ‘my God,’ that wonder. That love which is at the core of everything we see is God. As we dissect everything, what we ultimately see is ‘my God’. This is love. Whatever it may be that we want to study or examine, if we cut it open, what we ultimately experience is the fragrance and the light, which is ‘my God.’

“When we split open everything seen in life, finally we recognize that one thing which permeates all lives—God who appears as a ray, as the point, as the center of everything. That point is love. And when we perceive that love present within all lives, we have to love that love”.

Ahamed Muhaiyaddeen (Jonathan Granoff) is a disciple of the late Sufi Master, Bawa Muhaiyaddeen. He is a practicing attorney and an NGO representative to the United Nations. Jonathan was a close friend of the late Lex Hixon, and together they shared a talk at the last Parliament of Religions on the nature of “Open Space.” Jonathan is president of Global Security Institute: