The infinite a sudden guest
Has never assumed to be,
But how can that stupendous come
Which never went away?
—Emily Dickinson 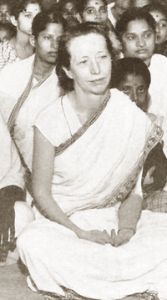 Thelma Rappold spent three years with Ramana Maharshi (1947-1950) at Sri Ramanasramam, in Tiruvannamalai, South India. At that time, the township of Tiruvannamalai was still a rural area, with none of the everyday amenities a Westerner would be used to. Remarkably, Thelma met her husband (also an American) in Tiruvannamalai during those years. This article is a transcript of the complete conversation, which was recorded for the DVD Abide As the Self.

How did you first find your way to the hermitage of Ramana Maharshi?
I went to India with the idea of finding a Guru. I landed in Bombay, then traveled all over India until I ended up in Pondicherry, at the center of Sri Aurobindo. It was there that someone said I might like to meet Ramana Maharshi. I said okay, and took one of those wonderful Indian buses. On my way to Sri Ramanasramam (Maharshi’s hermitage), I found myself in a state of reverie. In this state, I saw the large luminous eyes of Ramana; he just appeared to me as a sort of dream. When I actually saw him, my heart pattered for here was the same face that I had seen in my state of reverie; I was really, really shocked. I felt I was going to unpack my one little bag and spend the rest of my life at the Ashram. That was my first meeting. He opened those eyes, looked at me, and I just melted.

You had never seen Ramana before. When you finally saw him, was it exactly as you had “seen” him on the bus?
That’s right. That is what made it so shocking.

What was it like sitting in Ramana Maharshi’s presence?
When I sat in Maharshi’s presence I felt that my little ego had slipped back someplace, and I opened my heart and let those beautiful waves enter into me. I felt willing to accept whatever was offered me.

It seemed that the so-called problems I thought I had just vanished. I went through a cleansing process. I would think to myself, “What am I so concerned about, it doesn’t really matter, nothing matters but who am ‘I,’ who is this ‘I,’ what is this entity?” Ramana’s presence made me inquire, not intellectually, but deeper and deeper into the Awareness. The whole world disappeared, and I was in this wonderful space—it was up to me to absorb it, open to it, and let it become my being.

How did the association with Ramana Maharshi change your life?
Meeting Ramana totally changed my sense of values. My old sense of values simply disappeared because I had come to the realization that none of this really matters. You come into this life and try to do as well as you can, and it is only for a short period. If you don’t learn your lesson very well, then you come back and you have to repeat it. When I meet someone who is troubled I try to help that person discover who he really is, to let some of this glorious presence flow into them—that’s what life is all about.

Can you describe what life at Ramanasramam was like during an average day in 1948?
The Old Hall (where Ramana spent days and nights) was very primitive and life was much the same day after day. We arrived in the hall about 6:30 in the morning and sat in front of the Maharshi, who rested on a couch. The assembled devotees stayed until lunchtime, at which time we dispersed to our homes for lunch. We returned (to the Ashram) at a certain hour and stayed there until dinnertime. We spent our entire day with Maharshi and absorbed as much of that presence as our little thimble would allow—depending on how open we were. It was a very quiet, simple and beautiful life. Sometimes nothing was said at all, while at other times people asked questions. There was always an interpreter available because Ramana didn’t speak English very fluently. His common language was silence.

No one actually lived on the Ashram grounds; we all had to find our own place outside. Our main reason for being there was to be with Ramana and spend as much time with him as possible. I had to learn to do my own cooking on a little “bun” burner; I don’t know what you would call it here. Others taught me how to survive this kind of rustic life. I would wake at dawn and prepare my noonday meal. I placed the meal in a tiffin carrier (metal food carrier) and placed it on charcoals, so it cooked while I was at the Ashram. My entire being was one-pointed—to absorb as much presence and teaching as possible.

It always amazed me how Ramana sat absolutely quiet and motionless, yet his eyes were so penetrating. When I had questions I didn’t verbalize them, because it wasn’t necessary; the questions were answered almost immediately. It was our means of communication. It was a mind-to-mind connection; speech just got in the way. As days went by questions were answered; it was simply a slow cleansing of my entire being.

Are Ramana’s teachings easily practicable by the average seeker?
I think Ramana’s teachings are accessible to everyone, but generally people are sound asleep and not ready for them; they can’t relax and let go. Until they do that, they can’t get much from Ramana’s teaching. It’s too simple. We Westerners think it has to be complicated and full of mumbo jumbo, but it doesn’t work that way. We really have to get to the source of life.

Can you speak about the path of Self-enquiry?
The first thing to do on the path of Self-enquiry is to look at yourself directly. The more you inquire, the more you realize how essential this is. When problems arise, inquire “Who is concerned about these problems,” then they become insignificant and pass. They are here today and gone tomorrow. The real “I” is eternal.

How would you describe Ramana Maharshi to someone who had never met him?
To try and describe Ramana Maharshi in words is most difficult, because the essence of what Ramana is cannot be described. When he came into the Ashram after lunch or returned from his daily walk, I felt that someone had suddenly turned on a bright light. If I opened to that I was in a state of relaxation. In front of me was this tall man with nothing but a little loincloth on, whose eyes melted away all problems.

His face and eyes are luminescent. He tried to show me the reality of who I really am. Just sitting there, I was awed by the light in his eyes and by his being.

How did this stay in a remote Ashram, in the presence of a great sage, affect you?
When I first met Ramana I had been seeking, looking for someone for a long time. However, that doesn’t mean that I had shed my attachments. That was one thing he taught me in the very beginning. You are what you are; accept it. When the time comes to give it up, do it with grace. That was the first lesson taught to me, and as the years went by I kept trying to “open” as much as possible. I recognized that we all choose our suffering because we don’t open up and accept what life brings; we don’t find out “who” it is that is experiencing the suffering. I had never, at any previous time in my life, really let go and tried to just “be.” When we can do this, love just pours out.

Once there was a Westerner who came and asked Ramana why she couldn’t have Self-realization right now—she wanted instant Realization. Well, it just doesn’t work that way. Ramana shot a beam of energy toward her. That poor soul, it was just like putting one’s finger in an electric plug. She received such a shock that she did not come back for several days. Ramana was trying to teach her that Self-realization, though instantaneous, needs to be fostered like a growing plant, and when we can truly open up—Self-realization dawns.

What was it like at Ramanasramam at the time of Ramana’s death?
At the moment of Ramana’s passing, we were gathered together. It was as though one was aware of the “essence” leaving his body. A comet appeared in the sky the very moment he left his body, just when everyone was weeping and wailing. You couldn’t imagine all the sorrow. I felt a great loss, even though I knew only the physical body had gone. He must have been suffering, yet during his illness, his eyes never lost their luminosity. It was as though Bhagavan’s body and his Essence were two separate things. He just ignored the body and its suffering. Various doctors came to try and cure him (of malignant sarcoma) but without results.

The tumor just continued to grow and grow, but he was the Awareness, apart from the physical body. Immediately after his passing, it was as though a great magic wand had been waved over the entire congregation. You could have heard a pin drop, there wasn’t a sound. It was as though everyone present was engulfed in peace—and Ramana was still sitting in front of us pouring out love, beauty, and calmness.

What is your experience of Ramana’s presence now?
From the time I met Ramana until the time he left his body, I felt I had found my true home and teacher. It was as if I had lived several lifetimes in those few short years that I was with him. The person who came to him in the beginning was not the same person that left. I had grown so much and I had understood about the power to open locked doors within me.

Self Enquiry
By Arthur Osborne

The outer discipline of Self-enquiry is a constant check on actions and on the motive from which they spring. Sincerely and constantly applied, it removes the need for any formal code of conduct, for it strikes directly at the egoism in every action and reaction. The impulses of the ego will not change immediately. An insult will still cause anger and a flattering remark, pleasure; attachment to property and comfort will still continue; the senses will still clamor; but all such impulses will be exposed for what they are.

This is what Self-enquiry is aiming at. It does not teach each one any more theory or doctrine. It is quite possible to know all the doctrine that is necessary before you start—”Simply that becoming is and you are That“. What it does, after a certain amount of practice, is to bring increasingly frequent and lengthy experience of pure timeless being which is also pure awareness and unruffled happiness. This is not mental, and yet the mind is aware of it. It is not physical, and yet it is felt physically as a vibration or a waveless calm. Once awakened, it begins to appear spontaneously even when you are not “meditating,” or to subsist as an undercurrent to whatever you are doing—to the routine of life.

Ramana Maharshi would tell people to practice enquiry always, to ask themselves, “Who is doing this?” to engage in activity without the “I-am-the-doer” illusion. Keeping up this attitude of mind throughout the day’s activities is equivalent to remaining alert, to welcoming the sense of being whenever it comes.