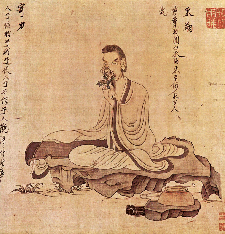 Lieh-tzu lived during the Eastern Ch’ou dynasty (770-476 BCE). It is said that he studied under Wen-tzu, who was a student of Lao-tzu. The book the Lieh-tzu contains materials that were written over a period of six hundred years. There were twenty sections which were condensed into the eight sections we have today. Because it contained more stories than formal philosophical discussion, the book was dismissed as a minor work. If it weren’t for the efforts of a scholar of the Eastern Chin (317-420 CE) who edited and wrote a commentary on it, the Lieh-tzu would have probably disappeared into oblivion. Lieh-tzu was a natural hermit. From the scanty information we have about him, we are told that, unlike Lao-tzu (author of the Tao-te Ching), he never held an office. It was his natural disposition to live a simple and quiet life.

Who is a Sage?
A Minister of the Kingdom of Shang came to visit Confucius. Never one to beat around the bush, the minister always asked questions in a blunt and straightforward way. So the moment he saw Confucius he asked, “Are you a sage?”

Confucius replied, “I do not dare to claim to be one. I’m only someone who has studied much and read widely.”

“Then were the Three Kings sages?”

“The Three Kings knew how to use their courage and intelligence. Whether they were sages I would not know.”

“What about the Five Emperors?”

“The Five Emperors knew how to rule with virtue. Were they sages? I do not know.”

“How about the Three Lords? Were they sages?”

“The Three Lords knew how to use the right people at the right time. It’s not for me to say whether they were sages or not.”

The minister was beginning to get impatient. “Then who do you think is a sage?”

Confucius would not be hurried, so he waited until the minister calmed down and replied, “Maybe far away in the West is a person who doesn’t talk about the art of government and yet his country is or­derly and peaceful. He rarely speaks about promises but is trusted by all. He does not use force, so everything runs smoothly. His heart is open and his actions are spontaneous. His subjects don’t even know what to call him. I suspect he is a sage, but that he is truly a sage I would not know.”

When the minister of Shang heard this, he was not pleased. He went away thinking to himself, “It doesn’t make sense. This fellow Confucius must be fooling me.”

Does it really matter if someone is recognized as a sage or not? If you are truly honest, sincere, and upright in everything you do, do you need others to acknowledge your virtues to make you virtuous?

What is Real and What is Unreal?
A man who was gathering firewood in the wilderness came across a deer. He killed it and hid it in a hollow so he could return and retrieve it later. He was so happy about his tremendous luck that he soon forgot where he hid the deer and began to suspect he might have dreamed the whole thing.

As he walked home, he muttered to himself about his strange dream. A passerby happened to overhear the woodcutter talking to himself and decided to see if he could find the deer the man had mentioned.

After searching around carefully in the area where the woodcutter had described, he found the deer in a hollow covered by branches. Amazed at his good fortune, the man took the deer home and said to his wife, “Today I met a man who dreamed he had killed a deer but had forgotten where he hid it. I went and looked around the place where he said he had killed the animal and found it in a hollow. Isn’t it incredible that dreams can be real?”

His wife replied, “I think you probably dreamed the whole incident. You found a deer and you dreamed you met a woodcutter who talked about killing one.” Her husband then said, “Well, it doesn’t really matter whether I dreamed up the incident or not. I found a deer and now we have a good supply of food.”

When the woodcutter got home, he was still bothered about whether he had killed a deer or not. That night he had a dream. He dreamed he had indeed killed a deer and had placed it in a hollow and covered it with branches. Moreover, in his dream he saw that someone whom he had met on the way home had gone to the hiding place and taken away his deer.

The Art of Swimming
Confucius and his studentswere standing near a waterfall. The water flowed over a ledge and dropped over three hundred feet below, where the river continued to flow swiftly through a gorge over thirty miles long. Even the fish, turtles, and alligators would not go near these dangerous waters.

Suddenly, they saw a figure jump from the top of the waterfall into the foaming river. Confucius thought this man must be attempting suicide, so he told his students to get to the banks of the river and be ready for a rescue. But when they hurried to the edge of the river, they saw someone swimming leisurely to the bank. To their surprise, the man stood up in the shallows, shook the water off his long hair, and began to sing.

Confucius couldn’t believe what he saw, so he walked toward the strange man and said, “When I saw you dive from the top of the water­fall, I thought you wanted to kill yourself. Then, when I saw you swim­ming in those treacherous waters and enjoying yourself, I thought you were a ghost. But coming up close, I can see that you are human. How did you manage to swim through such dangerous waters?”

The long-haired man replied, “I have no particular method of swimming, except that when I am in the water, I do not fight the water. I float with it and sink with it instead of trying to force my way through it. You can say that I started my learning with what was given to me at birth, continued with what was natural for me to do, and completed it by trust­ing what was meant to be.”

Confucius said, “Tell me what you mean.”

The man replied, “It means following the natural course of things. If I wereborn in the mountains, it would be natural for me to feel comfortable in the high mountains. That’s starting out with what is given in birth. If I were born by the sea, it would be natural for me to grow up playing in the water. That’s continuing with what is natural to do. When I do something, it never occurs to me to think about how I do it. That’s trusting what is meant to be.”

The Value of Emptiness
Someone asked Lieh-tzu, “Why do you value emptiness?”

Lieh-tzu said, “Most people like to be praised. They feel good when their accomplishments are acknowledged. However, I feel we would be better off if we were empty of attachments and not imprisoned by recog­nition, approval, and disapproval. In the long run, we’d have fewer things to worry about. That’s why I value emptiness.”

Lieh-tzu paused and then continued, “Even if you were given credit for doing something, you should realize that it was not entirely your own doing. Events occur because conditions are right, and your action only contributes to one of the many conditions. We are accustomed to think­ing that when things happen, they are our ‘accomplishments’; we don’t understand that there is actually nothing to accomplish. Therefore, rather than accept credit that does not belong to anyone, why not quiet down and think about the workings of heaven and earth?

“Seeing the emptiness of things can help us cultivate stillness and peace of mind. If you do not know how to keep still in this crazy world, you will be drawn into all kinds of unnecessary trouble. You will lose your view of the Way and, when you realize it, it will be too late, for in losing the Way, you will have also lost yourself.”

Chuang-tzu once told a story about two persons who both lost a sheep. One person got very depressed and lost himself in drinking, sex, and gambling to try to forget this misfortune. The other person decided that this would be an excellent chance for him to study the classics and quietly observe the subtleties of nature. Both men experienced the same misfortune, but one man lost himself because he was too attached to the experience of loss, while the other found himself because he was able to let go of gain and loss.

Eva Wong was born in Hong Kong and began her Taoist training at the age of fourteen. Ms. Wong previously taught psychology at the University of Denver and was actively involved in the activities at the Fung Loy Kok Taoist Temple. Her books include Seven Taoist Masters and Cultivating Stillness.

From Lieh-Tzu: A Taoist Guide to Practical Living by Eva Wong, Copyright ©1995. Reprinted by arrangement with Shambhala Publications, Boston, MA.