“The greatness and compassion of Ramana Maharshi is the
clarity with which he has shown that this beatific state is available to all.”
—Kunju Swami 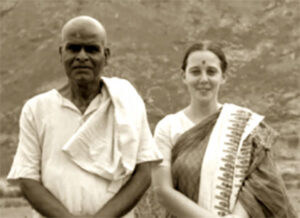 When I think of Kunju Swami, whom we first met in 1973 at Sri Ramanasramam (the Ashram of Ramana Maharshi in South India), I remember the sweetness, humility, and bright sparkling eyes which lit up with a glow the moment he spoke of the great sage Sri Ramana Maharshi. Kunju Swami came to Ramana as a young man and every event of his life with Ramana was recorded by his near photographic memory.

Kunju Swami led a very simple life. He made no claims about himself, even though he remained with the Maharshi most of his adult life. He simply referred to himself as a devotee, one devoted to the teachings of a Master. When we met him some years later, he lived in a one-room, thatched-roof hut, which became the rendezvous point before one of our many excursions together. The room had a reclining chair, a trunk which held his few possessions, and a straw mat to cover the mud floor, whenever the occasional guest arrived. That was all. In the sparseness of this room, Kunju Swami sat in his reclining chair looking like a king. For, he had a roof over his head and food was brought to him daily—what more did he need? He was completely free of all wants.

The story of Kunju Swami could easily have been lost forever because of his retiring personality. A number of people chanced to meet him during his daily visits to Ramanasramam, which he continued until shortly before his death in 1994. Though he spoke no English and kept mostly to himself, his contribution to the legacy of Ramana Maharshi is enormous. His remarkable memory kept alive the many stories depicting the love, compassion, humor and wisdom of the sage. Kunju (which means little or small) Swami lived in that state of peace and grace which Ramana prescribed as the antidote for mankind’s suffering. In all the years we knew Kunju Swami, his sense of equilibrium never wavered. He lived the teachings and expressed a joy which was tangible and contagious. It never made any difference to him that Ramana Maharshi was not physically present. To Kunju Swami, the message was clear: the Consciousness which was reflected in the body of the person called Ramana exists in all of us and is present and accessible each moment.

The above fact was demonstrated one day very clearly. We were on a walk around the Arunachala Hill, visiting various spots associated with the life of Ramana Maharshi. At midday we stopped at a temple which was halfway around the hill, in the small village of Adi Annamalai. We ate our lunch there, spread out a cloth, and rested on the ancient stone slabs which cover the temple floor. During the rest period, Kunju Swami began speaking about a similar day decades earlier, when Ramana, along with a number of other people, also stopped in the same temple at midday to rest. As he spoke, he suddenly sat up and said with a remarkable glow surrounding him, “I feel as if it were yesterday and I see the figure of the Maharshi seated against the column over there. I feel the peace that enveloped his presence. That peace is always with us—it is the peace of our own Self.”

Kunju Swami had a strong inclination for spiritual life even as a young child. He often sought out sadhus (mendicants) who came through his village in Kerala, South India. Once, when inquiring about a genuine master, he was told about the young sage Ramana Maharshi who lived in a cave on the Arunachala Hill. He immediately resolved to go and stay with him.

A plague had just swept through the town of Tiruvannamalai and no one was allowed to disembark the train which ran through the town. It took a few days for Kunju Swami to actually figure out how he could get off the train at his destination. Determined to succeed, he eventually arrived in town and was led to three different sets of steps that lead up the hill to the cave where Ramana Maharshi lived. Randomly selecting the middle path he found his way to Skandasramam, the small Ashram where the Maharshi had spent several years before moving down the hill. When Kunju arrived, the people in the Ashram were just leaving to attend the burial of an attendant who had recently died of the plague. Ramana’s mother was weeping, whereupon the Maharshi pointed to Kunju and said, “Why are you all so upset? Another son has come here to fill his place.”

Kunju Swami had decided to follow the first words that Ramana spoke to him, as a kind of Upadesa or spiritual instruction. After a short while, Kunju Swami and Ramana were alone in the Ashram, when the Maharshi began to pour some flour and water into a vessel and placed it over the fire. After preparing a simple gruel (cereal), he poured it into a plate, put it on the ground, and lifted a basket that was near him. To Kunju’s surprise, four puppies bounded out of the basket, frolicking with great joy, and began to run toward the plate to eat the gruel. Ramana at first tried to restrain them, thinking the gruel was too hot. Turning to Kunju, the first words Ramana spoke to him were, “Catch the four.” After the gruel had cooled, he said, “Release them one by one.” Kunju Swami took the words to mean “Catch hold of the four great truths, and let go of attachments one by one.”

The next teaching came when Kunju asked Ramana about acquiring peace and how one was to proceed. Ramana told him to discover who he was by finding the source of thought, to turn inward and merge the mind in the heart. After saying that, Maharshi resumed his natural silence. Kunju Swami followed suit and sat in silence. In that silence, all mental agitation vanished and he experienced a perfect peace and joy that he had never known before. 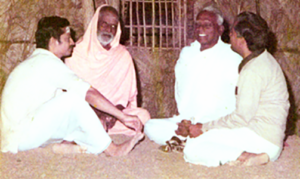 Many of the wonderful stories of Ramana Maharshi and his unique relationship with animals, much like the stories of St. Francis of Assisi, were preserved by Kunju Swami. Often at dusk a group would assemble on the boulders that lie upon the Arunachala hill, at the back of the Ashram. At those evening meetings, Kunju Swami would recall at length some of the many stories gathered from his lifetime with Ramana Maharshi, and would relate the teachings in a simple yet profound manner. On one occasion he said, “If we forget about this fellow called ‘mine’ then ‘I’ becomes lonely, and having nothing to hold onto, retreats back to its source.”

One story provides an interesting glimpse of the state in which Ramana Maharshi lived. Kunju Swami narrated: “When under the instructions of the manager of Sri Ramanasramam, I was serving as a personal attendant; I noticed the Maharshi’s body and head were regularly shaking and faltering. When there were only a few people present I asked, ‘Bhagavan, although you are only in middle age, it is strange that your head and body shake so much necessitating walking with the aid of a stick. What is the reason for it?’ Ramana replied, with a smile, ‘What is so strange in it? If a big elephant is tied down in a small hut, what else will happen to the hut except troubles of all sorts? This is the same.'”

Amidst the backdrop of sunset hues, splashing pink and orange upon the distant fields, Kunju Swami spoke animatedly in Tamil. It is on those occasions that I will always remember Kunju Swami best. Often we sat until the first stars appeared in the night sky. Those moments invoked that presence, the “peace that passeth all understanding,” our very Self. And, through association with Kunju Swami, it became abundantly clear that this presence is available to us at all times. We simply need to get out of the way and not obstruct its flow.

One day while Kunju Swami was living in a hut adjacent to the Ashram,
he desired to have a photo of Arunachala for his notebook.
When Ramana heard about Kunju’s request, he went to his hut and drew
this now famous rendering of Arunachala in Kunju Swami’s notebook.