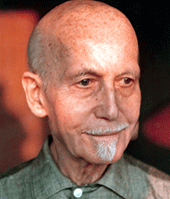 Intuition knows earthly truth without the intervention of reasoning, while insight knows divine truth in the same direct way. (20-4-151)

When the mystery of it all is solved, not merely intellectually but in experience, not only in the person himself but in transcending it, not only in the depth of meditation but in the world of activity; when this answer is richly felt as Presence and God, clearly known as Meaning and Mind, then, if he were to speak he would exclaim: “Thus It Is!” But this is not the beginner’s glimpse: it is the sage’s settled insight. (25-2-24)

Many complain that they are unable in meditation successfully to bring their active thoughts to an end. In the ancient Indian art I of yoga, this cessation—called nirvikalpa samadhi in Sanskrit—is placed as the highest stage to be reached by the practitioner. This situation must be viewed from two separate and distinctive standpoints: from that of yoga and from that of philosophy. Would-be philosophers seek to become established in that insight into Reality which is called Truth. Intuitive feeling is a higher manifestation of man’s faculties. So long as the feeling itself remains unobstructed by illusions, and—after incessant reflection, inquiry, study, remembrance, reverence, aspiration, training of thought, and purification—a man finds the insight dawning in his mind, he may not need to practice meditation. He may do so and he will feel the satisfaction and tranquility which comes from it. Those who become sufficiently proficient in yoga, even if they achieve the complete cessation of thoughts, should still take up the pursuit of understanding and insight. If they are content with their attainment, they can remain for years enjoying the bliss, the tranquility, the peace of a meditational state; but this does not mean knowledge in its fullest meaning. (20-4-138)

Neither deep meditation nor the experience can give more than a temporary glimpse. The full and permanent enlightenment, which is to stay with a man and never leave him, can only come after he has clear insight into the nature of Overself. (22-8-11)

In this astonishing revelation, he discovers that he himself is the seeker, the teacher, and the sought-for goal. (28-2-153)

Is insight achieved gradually or suddenly, as the Zen Buddhists claim? Here again both claims are correct, if taken together as parts of a larger and fuller view. We have to begin by cultivating intuitive feelings. These come to us infrequently at first and so the process is a gradual and long one. Eventually, we reach a point, a very advanced point, where the ego sees its own limitation, perceives its helplessness and dependence, realizes that it cannot lift itself up into the final illuminations. It should then surrender itself wholly to the Overself and cast its further development on the mercy and Grace of the power beyond it. It will then have to go through a waiting period of seeming inactivity, spiritual stagnation, and inability to feel the fervor of devotion which it formerly felt. This is a kind of dark night of the soul. Then, slowly, it begins to come out of this phase, which is often accompanied by mental depression and emotional frustration into a higher phase where it feels utterly resigned to the will of God or destiny, calm and peaceful in the sense of accepting that higher will and not in any joyous sense, patiently waiting for the time when the infinite wisdom will bring it what it once sought so ardently but what it is now as detached from as it is detached from worldly ambitions. After this phase there will come suddenly unexpectedly and in the dead of night, as it were, a tremendous Realization of the egoless state, a tremendous feeling of liberation from itself as it has known itself, a tremendous awareness of the infinitude, universality, and intelligence of life. With that, new perceptions into the Laws of the cosmos will suddenly unfold themselves. The seeker must thus pass from intuition into insight. (25-2-55)

To the man who has come along the path of loving devotion to God and finally gained the reward of frequent, joyous, ardent, inward communion with God, equally as to the man who has practiced the way of mystical self-recollection and attained frequent awareness of the Overself’s presence, an unexpected and unpalatable change may happen little by little or suddenly. God will seem to withdraw from the devotee, the Overself from the mystic. The blisses will fade and end. Although this experience will have none of the terror or isolation and misery of the “dark night” it will be comparable to that unforgettable time. And although it will seem like a withdrawal of Grace, the hidden truth is that it is actually a farther and deeper bestowal of Grace. For the man is being led to the next stage—which is to round out, balance, and complete his development. This he will be taught to do by first, acquiring cosmological knowledge, and later, attaining ontological wisdom. That is, he will learn something about the World-Idea and then, this gained, pass upward to learning the nature of that Reality in whose light even the universe is illusion. Thus from study of the operations of the Power behind the World-Idea he passes on to pondering on the Power itself. This last involves the highest degree of concentration and is indeed the mysterious little practiced Yoga of the Uncontradictable. When successfully followed it brings about the attainment of Insight, the final discovery that there is no other being than THAT, no second entity. (22-8-24)

Paul Brunton was born in London in 1898 (as Raphael Hurst) and began his life as a bookseller and journalist. He served in a tank division during the First World War, and later devoted himself to mysticism and first came into contact Theosophists of the day, as well as the literary and occult British intelligentsia of the 1920s. In the early 1930s, Brunton embarked on a voyage to India, where he met such luminaries as Meher Baba, Sri Shankaracharya of Kancheepuram and Ramana Maharshi. When Brunton met the Shankaracharya of Kanchipuram he was directed to meet Sri Ramana Maharshi. Brunton’s first visit to Sri Ramana’s ashram took place in 1931. During this visit, Brunton was accompanied by a Buddhist Bhikshu, formerly a military officer, known as Swami Prajnananda, the founder of an English Ashram in Rangoon. Brunton asked several questions, including “What is the way to God-realization?” and Maharshi said: “Vichara, asking yourself the ‘Who am I?’ inquiry into the nature of your Self.” This visit to India was the basis for his classic book, which introduced Sri Ramana to the world, A Search in Secret India.

After two decades of literary work, Brunton retired from writing books and devoted himself to writing essays and notes. He died in 1981 in Vevey, Switzerland. During the period after his last published book, in 1952, and his death, he rendered about 20,000 pages of philosophical writing.

From The Short Path to Enlightenment: Instructions for Immediate Awakening, by Paul Brunton. Copyright © 2014 by the Paul Brunton Philosophic Foundation. Reprinted by arrangement with Larson Publications, Burdett, New York. www.larsonpublications.com