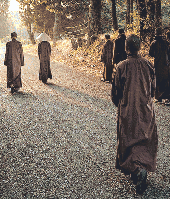 The appearance of a friend comes from our mind. Before we label “friend,” there’s no appearance of friend. Because someone loves us or does something good for us, we label her “friend” and she then appears to us as a friend; because another person doesn’t love us or harms us, we label him “enemy” and he then appears to us as an enemy. These appearances come from our own mind. When our enemy appears, an unpleasant feeling arises in our mind; when our friend appears, a pleasant feeling arises in our mind. All this is created by or originates from our own mind.

Without labeling “snake,” there’s no appearance of snake; after labeling a piece of rope at dusk “snake,” a snake appears. It’s the same with a person who doesn’t know that George Bush is the president of America. At first she sees just the appearance of a man. After somebody tells her that he’s the American president, she then also labels

This is also an important point to remember in our daily life, especially when we’re in situations where there’s a danger of creating confusion and problems and heavy negative karma. If we think like this, there’s no way to blame other sentient beings. First we make our own interpretation of a situation and then apply the label “good” or “bad” to it. We label what appears to us as bad, get angry and then blame other people—it’s illogical; it doesn’t make any sense.

With this reasoning, since everything that appears to us comes from our own mind, we don’t find anything for which to blame others. How things appear to us depends on how we look at them, how we interpret them. We then label them.

You can see that simply labeling a situation “bad” is not the problem. The problem is that after we label we start to believe in our own label. That’s what makes life difficult. Thus you can see how problems like this come from our own mind, are a creation of our own mind.

Lama Thubten Zopa Rinpoche was born in Thami, Nepal in 1945. At the age of tree he was recognized as the reincarnation of the Lawudo Lama. He is a Tibetan Buddhist scholar and meditator who for 30 years has overseen the spiritual activities of the extensive worldwide network of centers, projects and services that form the Foundation for the Preservation of the Mahayana Tradition (FPMT) which he founded with Lama Thubten Yeshe.