At first, for bewildered beings
Awareness did not arise on the ground.
That obscurity of unconsciousness
Is the cause of bewildered ignorance. 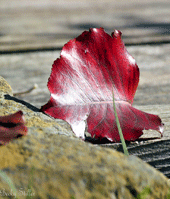 The Dzogchen view is that deluded beings arise because of the failure to see the awareness of the original ground. The awareness, which did not arise on the ground, is the awareness of spontaneous insight, vipashyana, superior insight. This does not mean that rigpa is absent in the beginning. It is very much present. However, when we fail to recognize it, when it fails to recognize itself, the illusion begins. The whole of samsara manifests from that very moment of nonrecognition. In a way, it is very simple.

We search so much for the beginning of samsara. However, Buddha said many times that it is useless to search history to find it. He said that there was not much benefit in knowing. Knowing when or how samsara started is not going to really help us to undo it. Therefore, Buddha concentrated mainly on the path that can undo it, rather than going into the history and so forth.

It’s like the big-bang theory. Scientists spent years and years and years finding out how the universe started. The only theory they came up with is just a big bang. That doesn’t really help us much. Even scientifically, it doesn’t help much. A big bang is a big bang.

Logically speaking, the answer is to look at this very moment: samsara begins right here. We don’t have to trace back a hundred years, a thousand years, or a hundred eons. We can trace back the beginning of samsara to this very moment. From the Tantric, Mahamudra, and Dzogchen points of view, it is the beginning of our samsara and it could be the end of our samsara. At this very moment, the basic state of mind is intrinsically pure in that state of great clarity. However, we’re not seeing it. Instead, there is the continuous pattern of ignorance and the other delusions that we have discussed.

That unawareness, which we call ignorance, is the beginning. It’s that simple. There is no awareness, no rigpa, when you’re totally unconscious. When there is no rigpa, the ground that is in the state of primordial alaya does not manifest. That ignorance becomes the cause of all our samsaric delusions. Therefore, it is the root of samsara. For that reason, the Prayer says that the cause of bewildered ignorance is this basic unconsciousness.

In that state of basic unconsciousness, nothing is clear. In that state, not even duality manifests. It is a very heavy state of mind. It is a deep state of dullness, like torpor. In Tibetan, we have a saying to call someone thorn kyer, which means “completely spaced out,” “completely blank,” “just sitting there.” It is much worse than couch potatoes. That same word is used here. In that state of unconsciousness that has no awareness, even the clarity of duality is lacking. It completely lacks vividness. According to Dzogchen, this is the cause and beginning of samsara.

From that unconsciousness
Emerged terrified, blurry cognition.
Self-other and enmity were born from that.

Now we can see that duality is coming. You know, good old duality is not that old. From the basic state of unclarity, that sense of totally lacking vividness, arises a second phase of confusion. This second phase is a terrifying experience. From that state of ignorance, conceptions start to arise in a kind of terror. Then we project some things as self and some things as other. From that beginning, we start to develop duality.

There is some sense of fear arising at this point because you are not very clear about the experience of clarity. The experience of the vivid world is arising, but you’re not sure of your relationship with it. In a way, you can see that terror in the faces of babies when they’re just born.

There is a sense of terror that arises when you come out of unconsciousness. Sometimes we have that experience when we take a siesta, at least I have. It’s a very weird experience to wake up from a long siesta in the afternoon. It is a kind of terror. You don’t know exactly what time it is. You think it’s morning, but, when you look, the sun is just setting or it is already dark. It is like going from that unconscious state to consciousness. There is always a mysterious experience in that very moment of switch. We’re not talking about a continuous experience of five or ten minutes, that’s different. But in the very moment of waking up, you can feel that terror. There is some sense of fear, a sense of loss in direction, in time, in reference point, in everything.

So, this experience is nothing new. It seems to be something that we have experienced from the beginning of samsara. That’s how the process takes place. When we first wake up, there’s a blurry cognition, especially for those of us that need glasses! There’s no doubt about it: the first thing we do is grab our glasses.

The experience of the terror, or the blurriness, comes from our mind failing to take its own place. It is our mind lacking the strength, so to speak, to remain in its own state of primordial buddhahood. There is a sense of weakness in that very particular experience. From there, we start our duality. The notion of self arises and, from that notion of self, the notion of other arises. From these two, we get caught up in the notions of enmity, friendship, and so forth. Then the good old samsaric game of duality begins to arise.

Dualistic mind develops first from the dominating ignorance. This dominating ignorance is the fundamental ignorance that we have been speaking about. It is the basic ignorance that we miss right at the beginning of every moment. I am not talking about a long time ago. I am talking about the beginning of any moment. We live in this illusion, thinking that fundamental ignorance is not there. We are meditating. We are mindful. Nonetheless, it is still there. It’s existent and it’s slippery. It is so slippery that we don’t even recognize it.

The Dzogchen Ponlop Rinpoche is one of the foremost scholars and educators of his generation in the Nyingma and Kagya Schools of Tibetan Buddhism. An accomplished meditation master, calligrapher, visual artist, and poet, he is also well versed in Western culture and technology. He is also the author of Wild Awakening: The Heart of Mahamudra and Dzogchen.

From Penetrating Wisdom, by the Dzogchen Ponlop Rinpoche. Copyright © 2006 by Snow Lion Publications. Reprinted by arrangement with Shambhala Publications. www.shambhala.com