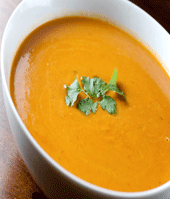 Soup is a universal food; it takes various ingredients, spices, and water and marries them together. I asked a few friends for their favorite soup recipes and I share their recipes with you. My favorite soup memory is a pot of many vegetables, various beans, tomatoes and spices, simmering on top of a wood stove, in the dead of winter. The embers burned slowly within the stove to create a low, even heat. The soup cooked from morning to evening and just before it was done I added a little apple cider vinegar and served it with freshly baked bread and home-churned butter. Eating this warming and satisfying meal, I quietly watched the snow swirl outside a bay window.

Now, living in Southern California, snow is a fond memory but soup still is a staple and favorite meal. I asked my friend Jeannie Salzman for her Potato Leek Soup, an award-winning recipe which she developed while living and growing leeks in rural France. She also included her other favorite, Pumpkin Soup. Jeannie in turn asked her friend Donna McLaughlin for her Red Pepper/Eggplant Soup recipe.

This article written years ago for an Inner Directions Journal. I had asked my then ten-year old daughter Ramani (now all grown up and living in Los Angeles) to share a simple soup that was one of her favorites and one that she was able to make on her own. —Joan Greenblatt 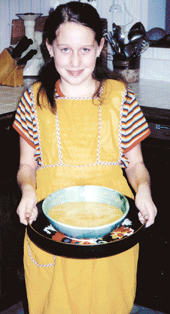 Ramani’s Cheesy Potato Soup (Ramani Greenblatt)
I like this soup because it’s easy and really good. You do need a little help from your mom, but kid’s can do it mostly by themselves.

2 T butter or margarine
2 T flour
2 C cooked potatoes, cubed (you can also use leftover (cooked potatoes)
¾ C cheddar cheese, shredded, or cut into small pieces. Be careful when shredding; this is where you can use mom’s help.
1 C milk. (You can use soy milk and soy cheese if you’re allergic to milk, like my dad.)
½ C water
1 t salt

1. MELT the butter in a saucepan.
2. ADD the flour and mix until it bubbles.
3. ADD the milk and water; let it cook until it begins to thicken.
4. ADD potatoes and salt, then cook and stir about five minutes.
5. REMOVE from the heat, sprinkle and mix the cheese into the soup.

That’s it. If you want to reheat the soup, don’t boil it.

Madame Lepape’s Leek and Potato Soup (Jeanne Salzman)
When my husband and I first bought our 400 year old farm house in Loire Valley, in France, I told my wonderful neighbors Monsieur and Madame Lepape to use our walled in garden as a place for Marquis, their energetic wire haired terrier, to play. Since we were back in America for months at a time it worked out well, for they planted the most magnificent vegetable garden for us: rows of lettuces, tomatoes, green beans, peas, onion, carrots, celery root, garlic, chives, parsley, potatoes, and two hundred and fifty leeks. It was bountiful and beautiful! So for the next several months we were deliciously nourished due to the graciousness of Monsieur Lepape, Madame Lepape, and their dog Marquis. However, being an American I really did not know how to use all those leeks. We tried steamed leeks, braised leeks, leek quiche, leeks in vinaigrette, but best of all was Madame Lepape’s recipe for leek and potato soup.

It has now been twenty years since that first garden of Monsieur Lepape. My husband and I learned much from his wisdom and generosity and for many years thereafter we also planted two hundred and fifty leeks each season. We lived through many winters sitting cozily by the fireplace enjoying great bowls of steaming leek and potato soup, and in summer when served chilled as vichyoisse. Leeks have become my favorite vegetable by the depth of character they impart to all the dishes in which they have been added.

Melt 4 tablespoons of butter in a soup pot; add 4 cups of sliced leeks. Cover and cook gently for five minutes. Add 4 tablespoons of flour and stir continually for two to three minutes. Add 8 cups of hot water, 4 cups of chopped and peeled potatoes, and 1 tablespoon of salt. Simmer for 40 minutes. Puree with hand blender or in a food processor. Serve simply with minced chives on top or with creme fraiche and chives, spooned in the center.

Pumpkin Soup (Jeanne Salzman)
This recipe is also from Madame Lepape. However, since we moved to Northern California, I’ve substituted the Kabocha (Japanese pumpkin), for the traditional French pumpkin.

2 C pumpkin, cubed (Kabocha if possible), simmered for twenty minutes. Use the skin along with the pulp (you can use canned pumpkin, but it is not as tasty as the Kabocha).
1 yellow onion, sliced
2 T butter or margarine
3 C vegetable stock
Nutmeg to taste
Blue Cheese and chives or cilantro to garnish

1. COOK pumpkin, until soft
2. SAUTE onion in butter for 10 minutes
3. COMBINE pumpkin, stock, and onions in a large pot and bring to a boil, then simmer for 10-15 minutes.
4. PUREE and garnish with blue cheese, chives or cilantro.

1 eggplant. Prick with a fork and microwave for 6-8 minutes or bake for a roasted taste. Peel and scoop out the cooked eggplant.
1 T olive oil
1 onion, thinly sliced
2 red bell peppers, thinly sliced
6 garlic cloves, peeled
6 cups of vegetable stock
Salt and pepper to taste and a few sprigs of fresh basil, sliced

1. SAUTE the onion, peppers and garlic in 1 T olive oil on a low heat for 30-40 minutes; the onions will caramelize.
2. COMBINE the sauteed onion, cooked eggplant, salt and pepper and stock, in a large pot. Heat thoroughly for 15 minutes and garnish with basil.